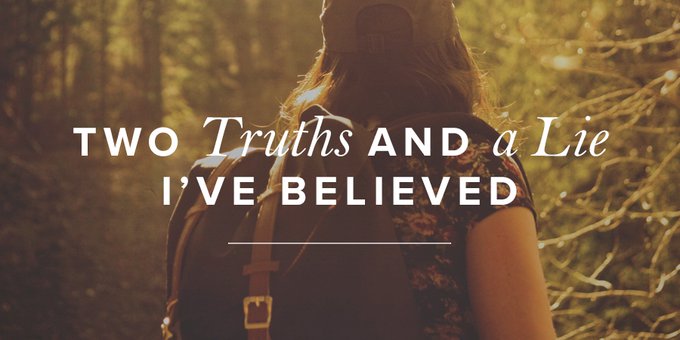 Ice breakers. The often necessary, sometimes amusing, usually dreaded part of all kinds of groups and events. One that I’ve done more times than I can count is Two Truths and a Lie. You’ve probably done it too. You tell two true things about yourself and then one lie, and people have to guess which is which.

But today, two truths and a lie isn’t a game. Instead, they’re fitting headings to describe how God is using an ongoing story He’s writing in my life for His glory. Let’s start with a truth.

I was last. As my family and I hiked the trails and mountains of Acadia National Park this summer, I was almost always the final member of our crew—usually lagging several feet behind whichever family member was just in front of me. My athletic husband and children bounded up rocky climbs and glided over treacherous terrain, while I, only generally fit and not at all athletic, maintained a more plodding pace.

I took advantage of my slower speed, taking in the beauty and unique features of God’s creation surrounding us. There at the end of the line, I pondered life, prayed for family and friends, and praised the Maker. But along with the typical nods and hellos from other hikers we passed, I also got several comments thrown my way.

“Those kids are quick! Keep going!”

Mostly I laughed and agreed with a sigh. But I admit, a few times when sweat and sore legs were overtaking the tranquility, I wanted a flyer to plop into the hands of the commenter with a brief but pointed defense. Since I had lots of extra time to myself on the trails, I wrote the imaginary flyer’s text in my head:

Listen. I know I’m last, but I’m not a total wimp.

While clearly I’m no athlete like the five people in front of me, I also have more of a story than you realize. Between the ages of twenty-three and thirty-one, I had major surgery to remove a benign tumor from the center of my brain, a shunt implanted a month later, a miscarriage a year after that, gave birth to those four children in front me, and had an emergency surgery to replace my first shunt when it failed shortly after my third child was born.

Then I had to have another shunt replacement surgery about six years ago with complications resembling a stroke, and I’ll most likely need another one in a couple years. I have permanent double vision that makes looking down at this trail pretty hard sometimes, and I’ve had several seasons of life when a hike like this wasn’t even possible for me.

So the next time you think of some witty or snarky comment to throw someone’s way, stop.

Consider that there may be more going on than what you see because that is what’s happening here.

I was feeling pretty smug with the private vindication those words brought, and then I was hit with conviction. How many other people on those trails could pass me a flyer with their own story? One that would take a book or daily journal, not a flyer to tell? What painful circumstance is weighing on her mind and heart? What kind of childhood did that man endure? What disease does that child have that I can’t see?

I cringed at my self-focus. As an act of repentance, I crumpled that pretend flyer in my mind into a tight ball and imagined tossing it over the cliffs. But I did take my own exhortation to heart: consider that there may be more going on than what you see.

The Lie: My Kids Get a Pass

One of the reasons my health journey was at the forefront of my mind as we hiked was that a couple weeks before my family embarked on our adventure to Acadia, my ten-year-old son experienced a significant fever and seizure. He had two other febrile (fever-induced) seizures at the ages of two and five, but children typically grow out of those kinds of seizures.

Because of his age and since he had effects from the seizure—confusion, memory loss, and a couple physical abnormalities—for several hours after the seizure, the emergency room doctors we saw were prompted to order further tests including an MRI of his brain a few days after the event. Thankfully, I have loads of experience with brain MRIs, so I was able to let my son know the basic procedures and sounds to expect to calm his concerns.

The day of the test, my husband and I waited in a small, private room, while our dimple-grinning son bounded off with a nurse to the MRI. Apparently when you get an MRI at a children’s hospital, there’s a special set-up to watch a movie while you’re in the tube, and he was pumped.

We giggled together at his excitement and then fell silent for a bit. As heartening as it was to know he wasn’t scared, I was. Scared of what the test might reveal. Scared of the possibility of a difficult health road for him in the future. With those thoughts, I realized a lie I had believed.

I’ve told people that I don’t believe this when I’ve shared parts of my story. But this situation revealed that I did indeed believe that lie. While I often have unique opportunities to testify of God’s kindness, provision, renewing work, mercy, and faithfulness because of my health journey, and though I know His unchanging character and truth, the emotions and unknowns of my son’s health revealed a chunk of unbelief and pride. Unbelief that God’s kindness, provision, mercy, and faithfulness may include health problems for my kids, and pride that my trials and struggles are sufficient for my whole family.

Truth #2: God’s Strength Is My Portion

So gazing out at the waves crashing on the rocky shoreline of Maine as my kids climbed and my husband sat nearby, I confessed my sin. Sin revealed by the majesty of God’s creation, His Spirit, and the implanted Word I have humbly received (James 1:21). I confessed my pride, selfishness, doubt, futile striving for control, and fear. I asked that the Lord might turn both my heart and mind away from those things so I would seek Him instead. That I might instead fully—not just mostly—depend on Him, submitting willingly to whatever circumstances He has for me, my husband, and my children.

The seasons of good health have mercifully outnumbered the seasons of struggles and the struggles have shaped us into the family we are today, marked by the hand of God. So if the struggles continue or last longer for me or extend to my husband or children, I choose to believe the truths that the Father has shown so intimately and deeply through the hard. That I might know that “My flesh and my heart may fail, but God is the strength of my heart, my portion forever. . . . God’s presence is for my good. I have made the Lord GOD my refuge, so I can tell about all [He does]” (Ps. 73:26, 28 CSB).

I have seen the words of these verses prove true for nineteen years of varied health struggles, and really, through all forty-two years of my life. While there have been times of doubt and discouragement like those I walked through this summer, one of the most profound things I have learned is that God’s Truth and Spirit, not my own thoughts or emotions, must control my mind and heart.

God’s strength is the only-sufficient, ever-available portion for all those who know Him as Savior through His Word and His ways. Why? Not only because of His exceeding love, kindness, sovereignty, and mercy, but so that we can tell about all He does. So that His Word will not be slandered (Titus 2:5). So that His multifaceted wisdom might be made known (Eph. 3:10). So that the name of our Lord Jesus will be glorified (2 Thess. 1:12).

I don’t need a flier to defend my place at the end of the line. What I do need are continual reminders that my hope and trust are in an eternal God who has knowledge and perspective infinitely more good and holy than my own. I need to remain diligent in pursuing truth for myself and teaching it to others—especially my children—so that I might have a sure foundation to stand on and a certain place to return to when trials, doubt, and fear return.

Are you building that foundation in your own life? Are you pursuing God’s Truth and glory in the midst of whatever circumstances surround you and those you love? Join me on that pursuit and on that sure foundation.