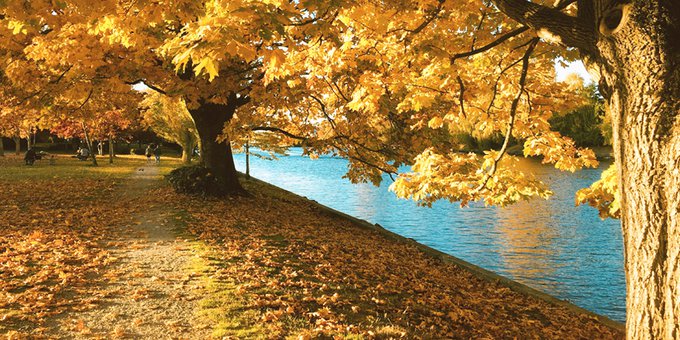 It happens every October. The first cold front comes through, college football kicks off, and I remember fall was the time of year my life fell apart.

For years, it embarrassed me that the sadness would quietly bubble up when I wasn’t expecting it. It happened in moments that should have been innocuous, fun. Who feels triggered walking into a college football game? It was as if my body remembered old grief before my brain realized what was happening.

But it would happen any time I walked on the college campus where I’d imagined so many of my childhood dreams. At birth, my mom had swaddled me in the school colors and taught the fight song alongside my ABCs. It was a given that I’d graduate from there, keeping the family tradition alive—until a chronic illness kept me from even filling out the application. Years later, I still felt it:

People like to say that time heals all wounds, but what if old aches can always be reactivated? Is it possible to think back on unfulfilled dreams without feeling the sting of disappointment?

The Pain of Past Hurt

If you walked into a stadium with fifty thousand people, you wouldn’t be able to go more than a few steps without bumping into someone with a bruised heart.

Some struggle to sit in the stands because cheering on the home team was a tradition with a family member who’s no longer able to attend. Some can still picture the seats where they sat on their first date, the beginning of a relationship that didn’t end with an engagement. Others hear a ringtone in the crowd that reminds them of the night they got the news that they had been betrayed by someone they trusted, an act they’re pretty sure they’ve forgiven but don’t think they’ll ever be able to forget.

As long as we live in a world impacted by sin, our stories will have sore spots. You may share my embarrassment and not have mentioned how you still feel about it to anyone except God. He not only sees, but He cares, and He’s able to ease the ache.

One of the great comforts of studying Scripture is getting to see how God has healed those who have come before us. We see that in the familiar story of Joseph in Genesis 37–50. Joseph suffered deeper and wider pain than many of us can even comprehend. It would have made sense for him to have been held captive to the losses he experienced his entire life, but what Joseph reveals in Genesis 41 shows that God is able to set us free from the painful memories of past hurt.

You may already be familiar with the main plot points of Joseph's life: betrayal by his brothers, slavery in a new land, false accusations, imprisonment, disappointment after disappointment. He had been away from home for thirteen years when his life finally started to trend in a positive direction. Joseph got a job promotion, essentially becoming prime minister under Pharaoh (41:40) and married Asenath, an Egyptian woman who would give him to two sons (41:50).

It’s hard to imagine what went through Joseph’s head when he found out his wife was pregnant for the first time. If ever there was a time for the memories of his own family to come flooding back, wouldn’t it be then? No matter how many times he had tried to forget what had happened, wouldn’t he feel the loss of all the normalcy he’d missed over those thirteen years? All the family dinners, the weddings, the nieces and nephews. All the conversations, the arguments, and the advice from his father about how to (and how not to) grow little boys into godly men.

All of those simple moments had been replaced with years of suffering. After everything he’d experienced, we might expect Joseph to be bitter and resentful—or even hostile to God. But the insight we’re given into his heart reveals something different.

In Israelite practice, it was common for the mothers to name their newborns, but Asenath didn’t name their boys. According to Genesis 41:51, Joseph named them.

It wouldn’t have been that surprising if the names he had chosen sounded similar to the one Naomi later called herself in Ruth 1. “Call me Mara,” she had said, “for the Almighty has made me very bitter. I went away full, but the LORD has brought me back empty. . . the LORD has opposed me, and the Almighty has afflicted me” (vv. 20–21).

Could Joseph have really forgotten his family? It’s clear they haven’t been fully erased from Joseph’s mind. Despite spending his entire adulthood in Egypt, despite marrying an Egyptian woman, Joseph didn’t give his sons Egyptian names. His Hebrew heritage would be on his lips from the first time he spoke to them.

Both names are a description of God at work in Joseph’s life. The Lord was the one responsible for changing his fortune and helping him to prosper in affliction. The years spent in a land filled with suffering and uncertainty were the backdrop against which God had been with him and God had blessed him. Or super-blessed him, as his second son's name implied.

Joseph didn’t forget the evil that had been done to him. It wasn’t that he no longer remembered his family—we see that a few chapters later when they unexpectedly arrive, and he identifies them first. But in the birth of these sons, we see that the memories of the past do not have a hold on him. As Bible teacher Chuck Swindoll explains: “God made him forget the pain, the anguish of what had happened . . . God removed 'the stings' in Joseph's memory and replaced them with waves of gratitude.”

From Grief to Gratitude

Thousands of years have passed, but God is still able to remove the stings from our stories. You may not even be aware of the ways He already has.

I realized it earlier this month: God has taken away some of the stings I thought would follow me forever. About thirteen years ago, I spent October in the guest bedroom at my grandparents’ house—too sick to attend school, too sick to dream about the future. I thought I’d always live there, in that hard and hopeless season, where every memory of October would bring the heartache of what was lost back then.

But November always comes—and I’m reminded of all the ways God has brought blessings into the places where I was afflicted, even in areas that haven’t seen full resolution. Year after year, the painful memories have been filled with comfort from the Lord and replaced with perspective: God has been faithful.

Those tender points in your life? God is able to heal their sting. One day, you may wake up and realize your heart doesn’t hurt the way it used to. When that happens, give thanks for God’s grace in your story. Give thanks that November always comes.

Previous Post How Do I Overcome Comparison?
Next Post The Character of God: Rest Your Head on His Sovereignty

Joy, Pain, and the Pastor’s Wife Life with Glenna Marshall