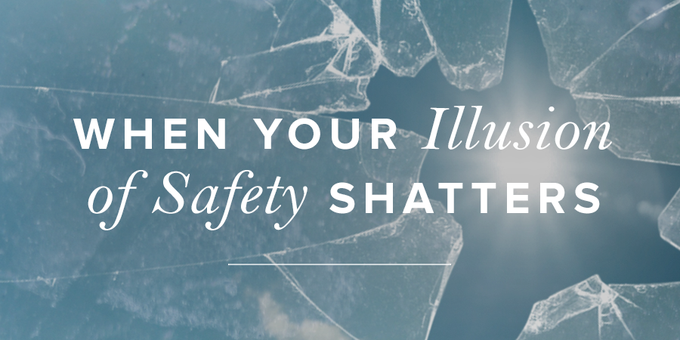 Trust When Your Illusion of Safety Shatters

I was driving home one night with my two littles strapped into their car seats behind me. It was dark and rainy. I saw the orange cones lining the busy street that bordered our neighborhood, but I paid them no notice since they had been there for weeks. What hadn’t been there—even earlier that day—was the six-foot construction pit. Which I drove into.

I screamed in terror as the car lurched forward and my headlights shone into the pit. Then, with adrenaline pumping, I scrambled to open my door and get my babies—feeling the van tilt as I did so. Not knowing how precarious the situation was, I unbuckled my loves with panicky, trembling fingers and snatched them out of the van to safety.

So there we were, on a busy road huddled beside our tilting van, which was now blocking oncoming traffic. I crouched protectively over baby Cole’s car seat and clutched two-year-old Lindsay’s waist. On one side was the ditch. On the other, traffic whizzed by making it impossible to cross—at least not in the dark with two babies.

Thankfully, the police soon arrived and ushered the kids and I into the back of the police cruiser to get us out of the rain. From there the police headlights shone like a spotlight on our van. The front tires hung disturbingly over the pit’s edge, making it look very much like the van could have been swallowed completely.

Lindsay, who was two, clutched the police car caging from her perch on the back seat and looked on with wide eyes. I tried to point out how the police and the tow truck were helping and how we were safe now, but she kept saying, “Mommy, yook! My car fall down!”

For Lindsay, this scene held a new terror that she had never considered. Before this, she hadn’t known there were big black pits in the world. And she certainly had not realized people could drive into them. We were completely safe, but my poor girl felt more unsafe than ever before.

The Illusion of Safety

In the weeks and months that followed, Lindsay continued to talk about what happened. “My car fall down!” she would say with urgency to strangers in the store or friends at church. It was as if she wanted to warn everyone that there was danger out there!

I repeatedly tried to assure Lindsay that we were safe now; there was nothing to worry about. But I couldn’t erase the scene of our van tilting forward into darkness and danger from her little mind. “My car fall down,” she kept whispering. The illusion of safety had been snatched from her, and I couldn’t give it back.

One day, my mom was holding Lindsay on her hip while we made plans to go somewhere. With her chubby hands, Lindsay turned Mom’s face toward her and leaned in so that their noses almost touched. With earnestness, she whispered loudly, “Mamaw, how ‘bout you drive, ‘cause Mommy go fast and my car fall down!”

What? I couldn’t believe it! Was my two-year-old questioning my driving skills?

Now, there was no denying that I had driven us into a terrifying situation. But it struck me funny that my two-year-old felt qualified to critique my driving! Had I not been driving her in complete safety since before she was born? And had I not spent the past two years caring for her, constantly considering her safety, health, and wellbeing? Yet now with all the two-year-old logic she could muster, she was doubting my trustworthiness—enough to solicit another driver!

This is such a good picture of us, at times. God has cared for us meticulously from before birth (Ps. 139:13). While our mothers slept, God knit together the intricate patterns of our eyes, ears, noses, mouths, and skin—so that we would enter the world with the capacity to receive and enjoy the sunshine, air, food, and warmth He provides. Before our minds were developed enough to understand, God was caring for us.

Yet in life there are moments when the illusion of safety is pulled back. Perhaps we experience something traumatic, see something that strikes fear, or experience the terrifying finality of death. In moments like these the world tilts off balance, and we wonder who—if anyone—is holding it all together.

With fresh doubt and fear, we turn our skepticism toward God. Where was He during that dark night of upheaval? What was He doing during the hour we cried out for rescue? Were His hands on the wheel when life took a nosedive into terror?

Perhaps we never gave much thought to God’s credibility before, but now we wonder! Can we know that He’s responsible, good, and strong? Can we count on Him to keep us safe?

When we question God, a new temptation almost immediately follows. It’s the temptation to find a substitute. So we turn to people, houses, or careers—anything that makes us feel secure. Or we turn to bank accounts, medical care, or popularity to ward off threats. We’re like toddlers, clutching security blankets to feel safe.

Yet our two-year-old reasoning cannot hold up. For when we buckle ourselves in with new safety restraints or new promise for security, have we ultimately locked onto control? After we exhaust ourselves, trying to pad our lives with every thinkable layer of protection, have we truly safeguarded ourselves or the people we love from heartache?

Often I have underdeveloped thinking on this matter of control. When fear floods my heart, I immediately convince myself that it’s all up to me. With panicky, trembling fingers, I try to snatch my loved ones away from pits. I map out plans to keep everyone from driving over cliffs. But depending on myself is just as foolish as depending on a house or money or person to keep me safe.

So God uses big, black pits to press me to recognize that I am not in control and my security blankets can’t shield me from danger.

God isn’t being harsh or cruel. He wants me to see that this burden of keeping everyone safe and avoiding all disaster is not something He placed on my shoulders. He didn’t ask me to take control. What God wants for me, and what He invites me to, is trust.

Friend, our world is full of pits. The whole earth is caving in under the pressure of sin’s curse, and none of us will escape its effects. So we have a choice. Will we apply two-year-old logic and become skeptical of the One who has been trustworthy and true? Will we call “substitute drivers” to give us an illusion of safety? Or will we trust God, who truly is in control and who is working all things—even the pits in life—together for our good?

How have you responded when your illusion of safety has been snatched away? If you’ve become skeptical of God or turned to “security blankets” instead of Him, talk honestly to Him about it. What does He want you to trust Him with? Read Psalm 30 aloud as a prayer to God.

Previous Post Repentance Is a Posture
Next Post Strong Women; Bridling Our Tongues; Books of the Bible in One Word, and More

Trusting God in a Fear-Filled World