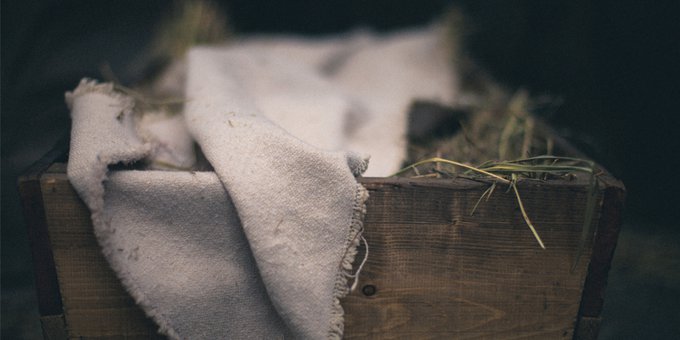 Treasure in a Manger

Back when I was a new wife, I returned a Christmas gift from my husband.

It was a jewelry box—a big, wooden one with ornate crafting—and he had spent a fortune on it. But when he encouraged me to take it back if I didn't really like it, I thought I was being reasonable to exchange it. Now, I think I was being foolish.

If I could talk to my twenty-six-year-old self, here's what I'd say:

Okay, sure. It’s good to be practical and conscientious about spending. But here's the thing. You weren't the one spending. You didn't buy the jewelry box. He did. And did you see how he watched you, carefully measuring your reaction, as you pulled the paper back? He wasn't looking at the price tag. He was looking at you.

Now, you don’t yet realize that control is an issue for you, but it is. And guess what? Gifts are one of those things in life that you can't control. It won’t stop you from trying, though.

In the coming years, you will return so many gifts that your sweet husband will lose heart and stop trying so hard to please you. By controlling the gift-giving process, you’ll be the one to miss out.

Keep the jewelry box.
Wear the scarf.
Read the book.

Delight in the gift, and you’ll be a delight to your husband.

I’m not sure who gave the first wrapped gift at Christmas, but I do know that our tradition is based on God’s gift, Jesus, given on the very first Christmas.

The manger that Mary laid Him in was like an ornate jewelry box, filled with the biggest treasure trove ever discovered. But some people wanted God to take His Gift back.

I’m filled with slack-jawed amazement at Matthew’s account of a town full of people who begged Jesus to leave (Matt. 8:34). They begged Him!

He had just sent a bunch of demons out of two men and into a herd of pigs, which promptly ran off a cliff and drowned. So the men were free of bondage, but the pigs were dead. It was a disruption to business as normal. They wanted Jesus gone so they could have their normalcy back.

The disciples, on the other hand, knew that nothing was going to be “normal,” once they left their fishing nets and tax booths behind. They knew that following Jesus would disrupt their lives, but even they didn’t realize that their plans for following Him would be upturned as well.

On the way to Jerusalem, Jesus told them as plainly as He could: He was going to be killed but would rise again. And how did the disciples respond to this gospel good news? “And they were greatly distressed” (Matt. 17:23). Luke reports: “But they understood none of these things” (Luke 18:34).

Why were they stressed out and confused? Because they had left everything behind to back—not a loser—a winner! They were expecting Jesus to march into Jerusalem and inflict pain, not endure it. They wanted Him to cut the Romans off at the knees, not to die on one of their crosses.

It was disorienting, confusing, and frustrating. And if they had been given a choice between a crucified Savior or a Rome-crushing messiah, we shudder to think what they might have chosen.

Thankfully, God didn’t cave in to their underdeveloped wish list. He gave them a Savior who died in their place and overcame sin’s power by rising from the dead. He gave them hope of eternal life.

If you’ve gone to a funeral lately, you know what a treasure this is.

Some gifts become more precious over time. I suppose that jewelry box from my husband would have. My salvation certainly has.

I asked Jesus to be my Savior at age four, when I only understood the most basic concepts of the gospel. I knew I was a sinner and punishment was coming. I knew Jesus loved me first and stepped in to take my place. And I knew I loved Him back.

Today I understand the treasure of my salvation more than ever before, but every time I open the pages of Matthew, Mark, Luke, and John—pages covered with my notes and thoughts and responses—I’m amazed at how much more there is to receive. The more I return to the story of Jesus, the more treasure it yields.

Like those people who were outraged by dead pigs when men had been freed from demon possession, some people still want Jesus to leave. They see Him as a disruption to their plans. Others want Jesus to stay, but only with the assurance that they’ll come out ahead and end up on the winning team.

It’s true that Jesus has conquered death, but those who receive His gift of life only do so on bended knee, in surrender to God. The Father freely gives the treasure of His Son, but not to those who would leverage Him for personal gain. Our precious Jesus is received with a heart of surrender or not at all. His gift of salvation is placed into empty, needy hands, not hands which are grasping for control.

Friend, God spent His fortune on Christmas and Easter. But when you pull back the gift wrap on your salvation, God isn’t looking at the pricetag. He’s looking at you. And when you treasure what He’s given and wonder at its worth, you bring glory to His great name. When you would sooner give your life than “exchange the gift” of Jesus, you display the true value of His worth.

Here’s the advice that those who have followed Jesus longer would give:

Delight in the gift, and you’ll be a delight to the great Giver of Christmas.

Previous Post The Church Together: Seated in the Heavenly Places
Next Post The Precious Gift of an Imperfect Christmas