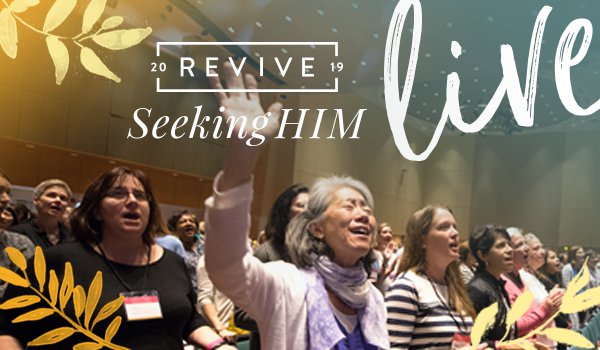 Have you ever crashed? And I don’t mean in a car or plane accident. Have you ever burned out, lost control, seen your life go down in a blaze of consequences?

I have. And to my surprise, there was grace for me.

If your life looks like a crash scene right now, there’s grace for you.

If your past looks like a crash scene and you can’t seem to let it go, there’s grace for you.

If others’ choices have caused you to live in a swirl of trauma or tragedy, there’s grace for you too.

In this morning’s session at Revive ’19: Seeking HIM, we heard messages that spoke into each of these situations. We heard Mary Kassian teach on the need for regular confession and repentance; Chizzy Anderson spoke on the abundant vat of God’s grace available to us, and Andrea Griffith invited us into being a channel of grace through forgiveness.

It’s hard to condense these messages down into a soundbite or two, so if you missed them, I’d encourage you to keep an eye out for the messages on ReviveOurHearts.com, so you can take it all in. They should be available in the next month or so.

But if you’re reading right now, and saying, “Yes, my life is in the middle of a crash, and I can’t do this anymore,” you don’t need to wait for the message recordings.

How to Find Grace in Crashing Situations

1. If you’re crashing because of unconfessed sin, repent and ask for grace.

Mary came out on the stage today with a giant cart of luggage. It was a weighty image (pun totally intended). After talking a bit about weight and the need for weight limits, she shared stories about a couple plane crashes that were caused by overloading. In one case, the crew lied about the weight so they could take off, when they shouldn’t have. The plane wasn’t in the air more than a few minutes before crashing and killing the people aboard.

The picture was clear. When we’re walking around with the weight of sin attached to us, when we don’t confess to the Lord, we are burdening ourselves with a load we were never meant to carry.

Suffering is a weight God gives us grace for, but our sin? His grace isn’t given to us so we can lug our sin around—it’s given so He can remove that weight! If we believe in Jesus, our sin is no longer our burden to carry. It’s His!

He is the only one that can take the weight of sin upon Himself without crashing. He took your sin upon the cross so that you wouldn’t have to carry it, so you would no longer have to be “weighed down with many sins” and fly into the ground. He came to give you the promise of the gospel—freedom and forgiveness at the foot of the cross. He came to give you life.

2. If your past crash is still haunting you, believe the gospel.

If the answer is yes, then swim in the giant vat of grace that God is offering you. As Chizzy told us at the conference today, God doesn’t dole out grace in tiny Dixie cups and expect us to find other ways to hydrate and cleanse ourselves. No.

He gives us an immeasurable sea of grace that we cannot only gulp down—we can immerse our faces in it. We can jump into it, swim in it, and let it surround us with its cool, healing, cleansing loveliness.

So if you’re the one still reeling from a crash, grab a hold of God’s grace. Run to Him; tell Him your pain; ask Him to help you believe that He has forgiven you, and that He will redeem all that has been broken.

He will fill you up. He will restore in His time and His way. He will give you grace to move forward.

3. If others’ sin or the circumstances you’re in are causing you to crash, embrace the grace of forgiveness.

As Chizzy shared, God has been extravagant in His forgiveness to us. He has lavished it on us in Jesus (Eph. 1:7–8). In turn, we are given the ability to be a channel of that grace to others, especially when they hurt us.

Stop the cycle. Confess whatever sinful reactions you have had to the Lord. As Andrea said, take responsibility for your 10%, even if the other person was 90% in the wrong.

Then, choose to not let that hurt take root as bitterness. Instead, pour out your heart and your hurt to our good Savior. Run to Him and ask Him to give you a heart that is willing to forgive. By His grace, He will help you. He will give you the ability to love those around you (note: love, not excuse their sin), even if you can never trust them again.

God’s grace, working in you, will help you walk in the forgiveness of Jesus. It will give you eyes to see how God can use the effects of the sins of others in your life. It will give you hands to heal the wounds of others and a heart of love for the hurting. Then He will show His beauty through you—perhaps in ways you never thought possible.

So, friend, whatever your crash looks like—present and weighty, past and shameful, or current and hurting, God has grace for you. Embrace it. Rest in it.

Previous Post Humility: Life in the Middle of the Ampersand
Next Post We’re Dependent on God for the Everyday . . . and the Extraordinary

We’re Dependent on God for the Everyday . . . and the Extraordinary

Humility: Life in the Middle of the Ampersand

To the Girl Who Couldn't Come to the Conference

Thousands Are Praying. Join Us!