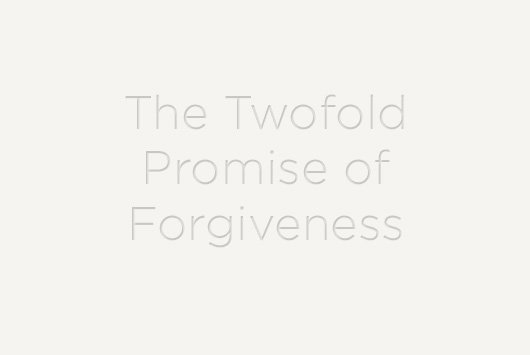 The Twofold Promise of Forgiveness

I know just enough about computers, as they say, to be dangerous. But one thing I've learned the hard way is the meaning of that little button that's spelled D-E-L.

That's right. The delete key. (I'm guessing you know about that one yourself.)

Believers, of all people, should appreciate the joy of forgiveness . . . because of knowing what a treasure it is to be purely and perfectly forgiven.

Like you, I can think of times when I was working away at something on my computer and accidentally pressed the delete button, only to watch all my hard work vanish into thin air, leaving behind nothing but a blank screen of forgotten words.

I wish the delete key was so easy to press in real life.

In many ways, what happens when we trash a computer document is a vivid picture of what takes place when we truly forgive someone for an offense they've thrust upon us. We eliminate it. We clear the record. We treat it as if the sin never occurred in the first place.

And isn't that how He tells us to forgive others—"Forgiving each other as the Lord has forgiven you" (Col. 3:13).

I believe most of us, in our dealings with others and the pain they've brought into our lives, would love to get to that point. We'd love to see the pain and bitterness gone, a non-issue, done away with.

But the problem is, we know that just pushing a button won't make all the feelings disappear. It won't totally undo the damage or put everything back like it was. So why even try? Why set ourselves up for disappointment, perhaps leaving the door open for this to happen again and to hurt us even worse? Why go to all the emotional trouble of transacting forgiveness if it won't repair the gaping hole in our hearts, at least not for a good long time? Why would God ask for such a thing?

Our Promise to Others

If we truly wish to forgive, we must make a conscious promise to forget as Christ forgets (Heb. 10:17). Our promise to others is never to bring up that sin against that person again—not to God, not to the person who committed it, not to anyone else. It is a deliberate decision to deal with another's sin by doing away with it, pressing the delete button, wiping it off our slate.

With the promise of forgiveness, we relinquish our "right" to punish the offender or to make him pay—his record has been cleared.

Sometimes a woman will come up to me and say, "I've forgiven my husband" or "I've forgiven so-and-so"—and then she'll begin listing all the hurtful things that person has done to her. While I can applaud her for recognizing what she needs to do, her own words reveal that she hasn't truly, fully forgiven—because forgiveness is a promise.

His Promise to Us

Not only is forgiveness our promise to others, but it's also a promise God has made to us. "As far as the east is from the west, so far has he removed our transgressions from us" (Ps. 103:12).

Yes, what we did to Him was real. What we continue to do against Him is real. But by the atoning blood of His Son, God has chosen not to remember our offenses. He has put them behind his back.

That's a promise we can take all the way to eternity.

This matter of forgiveness is truly at the core—the very heart—of the gospel. Even our excuses for not forgiving keep bringing us back to the cross, back to where forgiveness was perfectly applied, not to a group of people who'd gone through all the right steps to become forgivable, but to us—to people who didn't deserve it, didn't know we needed it—perhaps didn't even want it!

Believers, of all people, should appreciate the joy of forgiveness . . . because of knowing what a treasure it is to be purely and perfectly forgiven.

Editor's Note: This blog was formatted and adapted from Nancy's book, Choosing Forgiveness.

The Cross Is Enough for Your Most Shameful Sin

Passionate Pursuit of My Offender