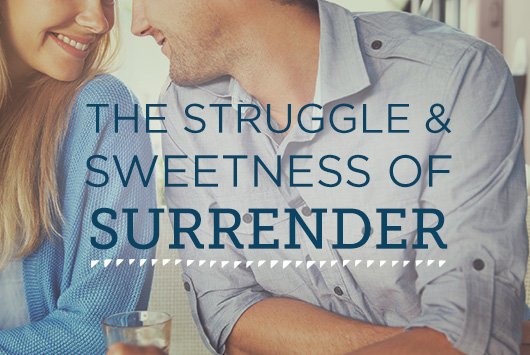 The Struggle and Sweetness of Surrender

Our parents always encouraged my only sibling and me to become good friends. This bond only increased as we became adults. Nathan is my brother, my friend, and as we moved into our twenties, he also became my boss as I worked in his production company. We had the same friends, same likes and dislikes, and we'd worked through enough "sibling battles" (and yes, there were many) to come out on the other side and appreciate each other's differences.

Instead of clinging to the way things had always been, I sought to find my identity and stability in Him. My flesh resisted this idea, but my spirit knew the Lord was initiating a change in my life.

I remember as a little girl wondering what it would be like when someone entered our "twosome" and married my brother or me. In 2008, that wondering became reality when the Lord brought a wonderful woman into my brother's life. Oh, I knew this day would come, but I didn't know the issues the Lord would address in my heart as I watched Him take my brother from singleness to marriage.

It hit me in full force the day Katie came to visit our home for Thanksgiving. All of a sudden, she was the center of his attention. I was on the sidelines. Even though she and I were good friends before their courtship began, it was as if my well-structured world drastically changed. (Even as a child I was never good at accepting changes.) I found myself close to caving with emotion. These feelings gave vent to tears one night when I was alone.

I knew I faced a choice. I was moments away from letting bitterness take root in my heart. In the quietness and darkness of my room that night, it was as if the Lord whispered this big question to my heart: "Chiree, will you damage a potential marriage by your self-centered attitude, or will you choose to invest in this potential marriage as something that I have called good and have ordained for your brother? Will you let go of finding your identity and stability in your sibling, and instead, find it in Me?"

At that moment I realized I had two options:

Thankfully, the Lord won that night. This began a process in my life of letting go. Instead of clinging to the way things had always been, I sought to find my identity and stability in Him. My flesh resisted this idea, but my spirit knew the Lord was initiating a change in my life. After all, that's His pattern throughout Scripture.

In Mary's life God initiated a change that brought forth new life within her—Jesus Christ. Did Mary's life live up to all her expectations? Certainly not. Here she was, a young woman engaged to be married, and one day an angel visits and says God has chosen her to be the carrier for His Holy Son, Jesus Christ.

Mary could have resented this change. She could have become bitter because her "well-planned life" was altered. But she did not. She let go of her plans when she responded, "Behold, I am the servant of the Lord; let it be to me according to your word" (Luke 1:38). Sometimes the Lord initiates changes in our lives through normal life situations (as mine was) or through trials and challenges. But each of these areas is meant to pry open our hands and allow the Lord to come in and fulfill His purpose through our lives.

While I was in this season of letting go, I attended the True Woman '08 Conference. In a behind-the-scenes interview, Janet Parshall painted a picture of the posture of a true woman. It hit me right between the eyes:

The most radical posture of a true woman of God is that of letting go. Losing control by falling into Jesus' everlasting arms of love . . .

It's true. That position of letting go is a radical one. It's a posture that comes with pain and tears. This position created a desperation for me to cling to Christ. Through the next few months at every turn, I felt the Lord ask me if I would let go. Let go of expectations, let go of the way things had always been, and embrace the new. I'll be honest—there were many moments when surrender wasn't easy.

But after Nathan and Katie's year-long courtship and engagement, I found the pain of change replaced with joy and hope. When Christ entered into those places of pain, He did what He does best—He transformed them. (Both my brother and sister-in-law were also so gracious to include me in their lives and begin building this new relationship together as siblings. And I could not have asked for a more loving sister-in-law!)

God gave me purpose in the pain by realizing that letting go of the way life had always been was opening my heart to the purposes He had in store for me.

When their wedding day came, I can honestly say it was one of the happiest days of my life. No, it wasn't my wedding. Yes, my brother had been blessed with this gift of marriage before me. But in the midst of it all, the Lord became more precious. God gave me purpose in the pain by realizing that letting go of the way life had always been was opening my heart to the purposes He had in store for me.

Maybe you're faced with that "radical position" of letting go. Maybe it's your sibling. Maybe it's your future. Maybe it's a habit or addiction the Lord wants to replace with Himself. Maybe it's the death of someone you love. In whatever situation, will you choose to fall into Christ's everlasting arms of love and say as Mary said, "I am the servant of the Lord; let it be to me according to your word?"

Growing Your Heart By Giving It Away