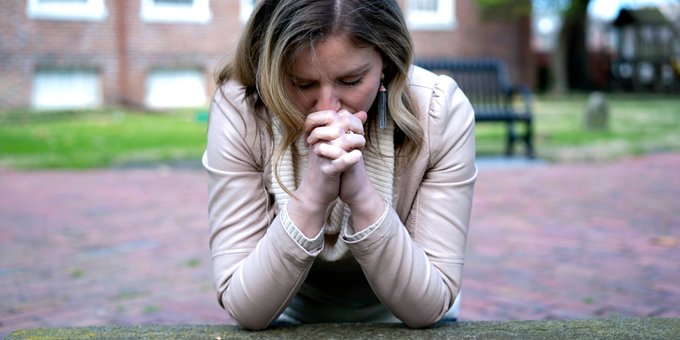 The Side Effects of Loss and the Gospel That Heals Them

A second husband, three spunky children—life is rich and full again, and grief often seems like a distant memory. But even now some unexpected, long-term side effects of loss remain: fear, worry, embarrassment, and shame, to name few.

Recently I needed surgery to have a painful but (thankfully) benign ovarian cyst removed. Concurrently, my husband has an unexplained mass on his arm, and we’re waiting for MRI results and surgery. Medical concerns still raise a prickle of fear followed by its close cousin, worry. If you checked my phone search history, you’d find a list of symptoms. My fingers sought answers and my heart played “worst case scenario.” I was on the lookout for that six-letter word that should be a four-letter word, cancer.

An Unexpected Rush of Fear

Given that my first husband died in an emergency department after symptoms were missed and mistakes made, it makes sense that I’m more cautious medically. That fear can still so easily overtake me is unexpected, however. It’s been almost a decade; haven’t I walked forward into a new, beautiful life?

As I cried alone in my car, worry and fear spilling out, I was also surprised to realize I’m still responding to the trauma of years past. Memories of emotional pain so intense it became physical still crouch in the corners of my heart.

I think, in part, “worst case scenario” is to prepare myself to process death if it happens again. If I prepare for the worst, perhaps my brain will not grow numb and foggy. Perhaps I will not experience so many sleepless nights, moments of sheer panic, nightmares, anxiety, loss of appetite . . . Perhaps I would not replay traumatic events over and over in my mind. Right?

I don’t want to go back there.

Closely related to fear and worry are embarrassment and shame. I feel embarrassed when I “overreact” about a symptom or seem fixated on finding the source of a problem. I worry about how doctors perceive me; I don’t want to seem like a hypochondriac. And I feel shame that even now, I don’t always have unwavering trust in God’s plan. There are probably some stronger saints out there than me, but I still fear suffering sometimes.

God has shown so much mercy and grace over the years, sparing my family from additional great suffering. Our oldest had a thirty-minute seizure (among other seizures). That same year I had a placental abruption at twenty-four weeks with our middle child, but it healed itself miraculously. Despite more complications and hospital stays, we made it until thirty-five weeks when my water broke. Both situations could have been dire. I pleaded with God, but held out open hands: “You are good. And You will always do good.”

The hammer hasn’t dropped. The bottom hasn’t fallen out. But there’s still a part of me that waits for it.

Four Things to Cling to When Grief Rises Up

As I reckoned with these layers of grief, it occurred to me that the same things I had clung to in the beginning of my grief journey, I still need when grief arises unexpectedly.

1. An eye toward eternity.

When he has swallowed up death once and for all,
the Lord GOD will wipe away the tears
from every face
and remove his people’s disgrace
from the whole earth,
for the LORD has spoken.

We weren’t created to experience death, and there’s nothing normal about it. We grieve because things aren’t as they were meant to be.

But one day all that’s broken in the world will be no more, even death. The weight of suffering is heavy, but it will not always be so. I can trust that God will accomplish all His plans. Eternity awaits.

I can trust that even if the bottom falls out again, real life without sorrow and sickness awaits. As C. S. Lewis believed, this world is but a shadow. We anticipate the real country, the rest of the story.

All their life in this world and all their adventures had only been the cover and the title page: now at last they were beginning Chapter One of the Great Story which no one on earth has ever read; which goes on forever: in which every chapter is better than the one before. —C.S. Lewis, The Last Battle

2. The grace of true community.

“Hang in there, friend. You have some very specific trauma that would make you more concerned about physical issues. God knows about that too.”

Her words freed me from shame and embarrassment. I didn’t have to worry about how my dear friends perceived me; they didn’t think less of me. Instead, taking the risk of being vulnerable yielded good fruit.

This friend and others reminded me that God knows my heart and that there is mercy in the struggle. Because Jesus already died for all my fears and worries, I only know His grace. I only know the look of approval from His eyes.

Her words also affirmed that I had gone through something life altering, and of course it still affects me from time to time.

True community helps us remember what is real when we can’t do it on our own.

Early in grief I knew I needed to cling to the character and work of Christ. As Jesus wept with Martha and Mary, so did He weep with me. He knew He was going to raise Lazarus, but He felt their sorrow with them (John 11).

Additionally, if God did not spare His own Son, He will spare no omnipotent effort to do good to His children. Bad things happen, and it’s ok to acknowledge them. But God can redeem what is bad, traumatic, and tragic.

Suffering, as Ligon Duncan said, is about the "ruthless compassionate pursuing grace of God, in which He relentlessly goes after His servants for His glory, and their everlasting joy.”1

Somehow, the most horrific night of my life was God's grace. God was and is relentlessly coming after all of me.

Somehow, the most horrific night of my life was God's grace. God was and is relentlessly coming after all of me. He wants it all. And somehow it works out for my everlasting joy. My joy! In taking Jon, He showed me so much more of Christ than I would have ever comprehended or thought possible. When I think about the night my expectations were shattered, I can say with confidence that Jesus was and is the best, even when my emotions say the opposite. And if the shattering comes again, there will again be grace to say Jesus is best.

When doubt, fear, and worry creep in, I recall Jesus’ response to John the Baptist in Matthew 11.

Now when John heard in prison what the Christ was doing, he sent a message through his disciples and asked him, “Are you the one who is to come, or should we expect someone else?”

Jesus replied to them, “Go and report to John what you hear and see: The blind receive their sight, the lame walk, those with leprosy are cleansed, the deaf hear, the dead are raised, and the poor are told the good news, and blessed is the one who isn’t offended by me.” (vv. 2–6)

First, notice what’s not there: rebuke. He never said, “Come on, John, really? You’re My cousin for crying out loud. And a prophet. And surely you’ve heard the stories of your birth and Mine. You, of all people, have no reason to doubt.”

Nope, it’s not there.

Rather, Jesus merely gave John evidence. The blind see, the deaf hear, the lame walk. In instructing the disciples to tell what they heard and saw, He drew John’s attention back to Scripture. He gave him assurance by pointing out that prophecies were being fulfilled.

Likewise, I don’t have to fear rebuke or disapproval. Jesus lovingly turns my mind back to truth.

There is no condemnation for those who are in Christ. The Spirit of God dwells in me and reminds me who I am—an adopted child, an heir with all the rights and privileges of sonship. I confess my fear, worry, and shame before the throne, and they flee as truth eclipses the lies. Insecurity diminishes against the radiant light of the gospel (Romans 8).

4. The humility of surrender.

The wrestle is valid and even necessary, but in the end surrender is sweet. I know who God is. And I know He is trustworthy.

For most of us, the type of surrender that lays a husband and children before the throne is probably not a one and done thing. I’ve meant it before, but as I dealt with this new layer of grief, I knew I needed to physically and spiritually open my hands.

“Lord, I surrender. They are Yours. By grace I need not fear sickness and death. If You ever take them, You will still be good. Your will, not mine.”

“Peace, peace be still,” the Holy Spirit whispered to my heart, and there was rest.

I remember someone mentioning that I might always carry a little grief with me. I hoped she wasn’t right, but I think she may have been. Perhaps death left lifelong side effects. Perhaps I’ll always fight the propensity to fear and worry. But the Word of God remains good and true even a decade later. And if I always carry grief in this life, it’s working out an eternal weight of glory.

1Ligon Duncan, “The Underestimated God (Session VII),” Together for the Gospel, November 4, 2019, http://t4g.org/resources/*2012/05/the-underestimated-god-gods-ruthless-compassionate-grace-in-the-pursuit-of-his-own-glory-and-his-ministers-joy/.