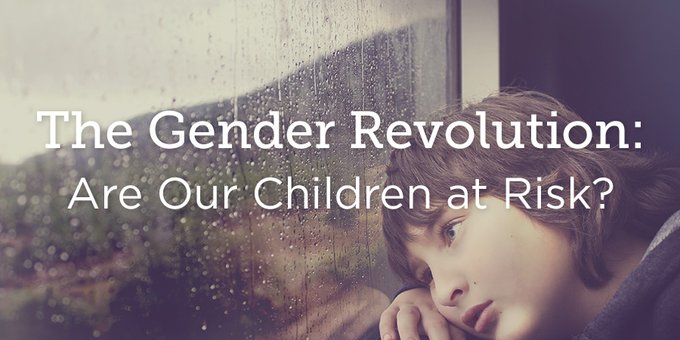 The Gender Revolution: Are Our Children at Risk?

How is it that we live in a culture where same sex marriage, gender reformation, transgenderism, and homosexuality is one of the hottest topics—but we worship in churches where it is almost never addressed?

And we live in homes where we aren't talking to our children about it?

Could it be that some of us are waiting too long to introduce our children to God's beautiful truth about gender that we're giving way to the world to plant lies?

George Barna, founder of The Barna Group, says the majority of tweens today believe the Bible does not condemn homosexuality.[1] This doesn't surprise me. The Ontario (Canada) sex-ed curriculum teaches that there are six genders (male, female, transgendered, transsexual, two-spirited, and inter-sexed).[2] Perhaps you've heard about the training pamphlet used by teachers at a Lincoln, Nebraska middle school that encourages their teachers not to call their students boys or girls. Instead, they're encouraged to use phrases such as "campers," "athletes," or "purple penguins." The pamphlet reads: "When you find it necessary to reference gender, say 'Boy, girl, both or neither.' When asked why, use this as a teachable moment. Emphasize to students that your classroom recognizes and celebrates the gender diversity of all students."[3]

Even if your children—like mine—are not in public education, they are growing up in a world of children who are.

Building a Theological Foundation for Our Kids

If children are exposed to lies, they are old enough to be exposed to the truth. Barna also says that what a child believes by his or her fourteenth birthday is generally what they will die believing. Could it be that some of us are waiting too long to introduce our children to God's beautiful truth about gender that we're giving way to the world to plant lies?

My heart has been burdened so greatly by this as I realize how very much the cultural debate pinpoints our self-focus. The gender revolution is evidence that we have neglected our vertical worship of God and succumbed to a horizontal worship of humanity, and I think our children may be more at risk than anyone else right now. While some parents seek to shelter their children, the fact is that one day they will emerge as young adults and be thrust into the conversation. Will they have a theological foundation to engage? If they don't, I think it could undo not just their sexual theology, but also their faith in God altogether.

I have my grandma Barker's in-turned pointer fingers, and my dad's blue-green eyes. I know where I have come from. I look like them. When God created maleness and femaleness, He was creating something that would display His image. (Gen. 1:27) He wanted humanity to understand whose we are, so He planted a "selfie" of Himself in us. (More on this in tomorrow's post.)

The book of Romans teaches us that disregarding God's definitions for manhood and womanhood is a rebellious refusal to glorify Him and an attempt to hide who He is and whose we are. Pastor John Piper puts it this way:

"God's divine nature is revealed in the physical, material universe. So much so that verse 20 says, "So they are without excuse" when they "exchange the glory of God for the glory of the creature" (Rom. 1:20, 23).[4]

Our culture is seeking to redefine manhood and womanhood, to make our own gender. Until recently, Facebook offered more than fifty gender options under "other."

How Do We Address the Issue?

While some conservative leaders are called to dialogue politically and others to teach adults sexual theology, I'm more concerned about our children. This is a difficult issue for the most educated and mature of us. How much more challenging is it for our children who are growing with this very unique cultural conversation where gender preference will be a norm? The culture at large voices approval to gay marriage (nearly 60% of Americans support gay marriage[5]), homosexuality, transgenderism, sex reassignment surgery, and more, as the gender reformation gains ground and terms like "gender minority" gain popularity. Will our children's faith be able to survive the aftermath ten years from now?

Will our children's faith be able to survive the aftermath ten years from now?

Will they still be worshiping God? Or will they succumb to the worship of self?

The church is not adequately raising up material for Christian parents and their children to be trained up to know the truth about sexuality and gender. Could we be missing the greatest strategy of all to win this battle?

Tomorrow I'll share three truths children must know about their bodies in order for moral truth to survive and for their faith to survive the gender revolution.

Previous Post Pulling Together: Marriage, Ministry, and Calling
Next Post 3 Things Your Children Must Know About Gender Identity

3 Things Your Children Must Know About Gender Identity