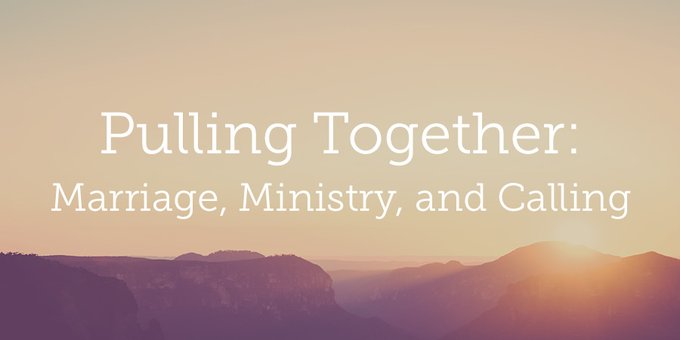 Pulling Together: Marriage, Ministry, and Calling

Recently, Bible teacher, Christian radio host, and conference speaker Nancy Leigh DeMoss announced that she will marry Robert Wolgemuth this coming fall. For years, DeMoss has been an advocate for Christian women to embrace the "freedom, fullness, and fruitfulness" found in Christ, including the unique calling to home and motherhood. At the same time she has confidently and comfortably embraced her own singleness, believing it to be a gift that has allowed her to commit herself to ministry.

But as God does, just when we think we know the plan, He changes it. Recently, He has brought widowed Wolgemuth and DeMoss together in order "to continue serving Him wholeheartedly, trusting Him to make us even more spiritually fruitful together than we could be apart."

I love this man dearly and look forward to becoming Mrs. Robert Wolgemuth. But my life mission has not changed. It will now be our life mission to magnify the Lord together . . . We envision a continued robust Revive Our Hearts ministry. Our longing is for even more women (and men) around the world to experience freedom, fullness, and fruitfulness in Christ.

My promise to our heavenly Shepherd, to Nancy, to her precious ministry family, and to the thousands around the world who love Nancy Leigh DeMoss, is that I will come alongside her and her ministry with my prayers, encouragement, and support.

And all God's people said, "AMEN!" This is precisely how we should talk about married women and their calling to Christ's kingdom.

Unfortunately, I don't hear this language employed very often. Instead, I regularly hear Christian women being told to seek their callings through their husbands. Don't get me wrong. I am fully convinced that a woman is called to minister to her husband and family. And I'll be the first the trumpet the imago Dei—quality of a well-made peanut butter and jelly sandwich or a properly laundered (and folded) pair of boxer shorts. What I'm concerned about is how often we confuse our prepositions—how often we misunderstand the difference between through and to.

Christian marriage is two people bound together by a mission greater than either one of them—loving Christ and serving His people.

In 1 Corinthians 7, Paul makes it clear that husbands and wives must cultivate and care for each other. Of all the neighbors you are called to love, your spouse is the closest one. This means that being married will naturally limit your ability to pursue other callings in the Church. But Scripture also makes it clear that the call to marry is rooted in a larger call so that even as we enter it, we remember that marriage itself is not all-consuming. It is only part of how we serve the Lord with our whole hearts and lives. This is true for men. This is true for women.

It may sound like I'm stating the obvious. Don't Christian women understand this? No, I'm afraid that some don't. Some, in fact, believe that the calling to help their husbands trumps every other ministry calling or desire. Sometimes they believe this because of their own immaturity; and sometimes they believe it because this is what they have been explicitly told. The result is confusion and frustration as women wrestle with their own gifting and place in the Church. They either become weak and directionless, unable to serve apart from their husbands; or they become frustrated and manipulative as they attempt to live out their own passions and gifting through their husbands.

Early in our marriage, when my husband first entered professional ministry, I honestly believed that my calling in the Church would be fulfilled through him. So whatever he needed me to do to further "his" ministry, I did. But I also ended up crossing a lot of boundaries I shouldn't have crossed. I invested myself too deeply in his career, attempted to do the Holy Spirit's work in his heart, and meddled in things that were not my concern—all in the name of "supporting" his calling.

What I was really doing was longing for a way to use my own gifting to serve the Church.

God was faithful despite my immaturity, and today I work beside my husband as a wife, mother, and active member of our local church. Out of the Holy Spirit's gifting, I offer advice, counsel, and support as he needs it; but what he most certainly does not need is for me to confuse my calling with his.

As I've found the freedom to develop my own gifts, God has led me to a place I never expected. Today, a significant part of my ministry happens independently of my husband's. It happens through mothering and homemaking, to be sure, but it also happens through blog posts and articles just like this one.

The result? Today my husband and I are more fruitful for the Kingdom than we have ever been.

I live in the Blue Ridge of southwest Virginia. You may not know that this is railroad country. Our county and the surrounding area was built on rail, and to this day, Norfolk-Southern is one of our largest employers. We also have a lot—A LOT—of mountains. So it's not unusual to see two engines coupled together pulling a load of cars. With hills this big and loads this large, one engine simply can't do the job alone.

In many ways, marriage is the same. Both men and women have the same basic calling: We are called to work for Christ's Kingdom. We have to get the load up the mountain. But just like one engine can't do it alone, neither can men nor women do it alone. "So God said that it is not good that man should be alone; I'll give him a second engine to help him." (That's from the SWVA version of the Bible that also translates the plural of you as "ya'll.")

But here's the thing: too often, we think of a woman as the coal car that fuels the man's mission; in reality, she is a strong, second engine tasked with the same mission that he is. His engine may be out in front, and she may even be a different make and model, but make no mistake, they are both tasked with getting the load to the top of the mountain.

You may want to read about Nancy's engagement.

Previous Post When You Think Feminism Isn't Affecting You
Next Post The Gender Revolution: Are Our Children at Risk?