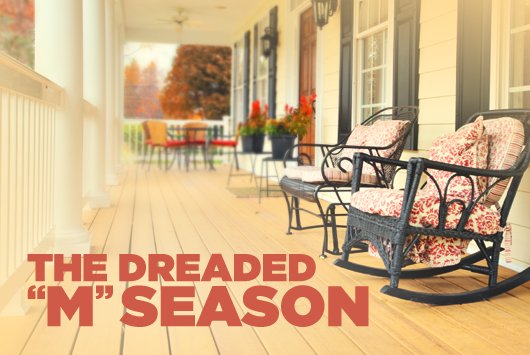 It sounded so old; it sounded frail. I didn't like the sound of the dreaded "disease" they kept mentioning: "menopause." Surely only wimpy women gave into the symptoms I heard about as we sat on the front porch of my grandmother's house that Sunday afternoon. As an eight-year-old, I was confident when I reached "that" age, I wouldn't cave in to such silliness.

If those precious "old" ladies could've read my mind:

Of course, now I realize that what I thought of as "old ladies" then wasn't really that old!

I've always called it the "M" season because I hated that word: menopause.

I wonder if God graciously looked down on this arrogant, little girl and in compassion determined that a good dose of the "M" season was exactly what she'd need in forty years! Yep, that "M" season has definitely brought me to my knees in ways I would never have imagined. But as a dear friend frequently reminds me, "Anything that causes us to need God is a good thing" . . . right?

I've found no matter how unfamiliar this territory, my faithful Companion hasn't changed.

This season has caused me to need God in a way I've never needed Him before. It has brought a new sensation into my life: fear. Fear has never been much of an issue with me, but something about the strange new terrain brings this enemy with it.

It's funny to think about fearing this season of life, but on some of my worst days I've literally feared I'd never sleep a full night again, feared I was losing my mind, feared I'd never return to "normal." I've feared that the dark shroud of depression might reappear, and I've feared the changes that come with this process. But I've found no matter how unfamiliar this territory, my faithful Companion hasn't changed. I may be changing, but thankfully, He isn't!

I've clung to Him like never before through this crazy, mixed-up, hormones-out-of-whack season. I've found He is the same faithful, constant Companion He was when I was an arrogant, young girl on my grandmother's porch.

And this is how I can fight fear daily. Although I'm changing, He's the same.

I'd love to hear from you. Have you entered the "M" season yet? What challenges have you encountered, and how are you dealing with those?