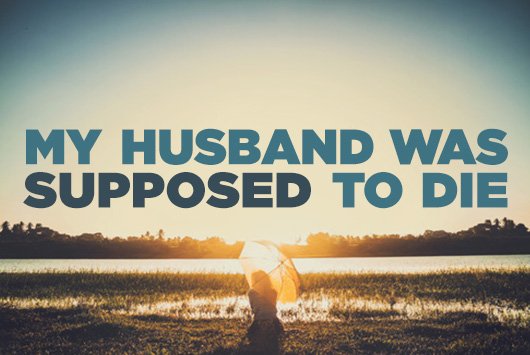 My name is Ami Atkins, and I am a thirty-year-old barren widow.

My husband Jonathan died nine months ago. He was also thirty. We had been married two-and-a-half beautiful years. Jon's death was unexpected, the result of a faulty heart valve.

I'm still in this, but God is carrying me with astonishing grace. He has met me abundantly in the waves of sorrow. He has not let the grief drown me, nor will He.

God even uses human mistakes to accomplish His purposes.

Jon was a passionate follower of Christ. He lived with reckless abandon for God and the gospel. Jon adored me, but he adored Jesus more. He lived to proclaim the truths of redemption, propitiation, adoption, and reconciliation.

I always told him God had great things planned for his life. This is still true.

I've struggled with guilt since Jon died. Perhaps this is a battle for anyone deeply grieving. But for me, I think the rapid events leading to Jon's death made the temptation toward guilt stronger than had he died, for example, from a terminal disease. With a terminal disease we might have known he was dying—but the night Jon died, reality didn't register.

"It's been over an hour. You have to tell us we can stop."

The emergency room doctor was asking me to give permission to stop CPR. I vividly remember my near hysteric response:

"Are you telling me my husband is going to die? How can you ask me to make that decision?"

I kept repeating "How is this possible?" over and over.

God finally gave the grace to say, "Jon's Yours." Yet in the following months, the temptation toward guilt has sometimes seemed unbearable.

Several weeks ago I came to a crossroads. I met with Jon's cardiologist, and he shed some additional light on Jon's death. Two days before Jon died, we had been at the cardiologist's office for another echocardiogram. The day Jon died, the doctor reviewed the new echo and was shocked at the rapid deterioration and drastic change in Jon's valve; he wanted invasive tests done immediately. But Jon died that night. It was too late.

In less than a month the scenario went from "The valve looks okay. You can definitely wait until summer for surgery" to Jon's body shutting down. No one could see it happening.

Though I've maintained God's sovereignty, it finally sunk in: Jon was supposed to die.

God could have changed any number of factors leading up to Jon's death, but He chose not to. He could have had the doctor review the echo the day we were there. Yet God didn't intervene, and He didn't allow anyone to fully see the severity of the situation.

God even uses human mistakes to accomplish His purposes. So there really is no one to blame. This is the truth: no person held Jon's life in his hands except Jesus Christ. The day of Jon's death was ordained before he was ever born.

The Life-Altering Theme of Reversal

I don't think I can describe the intensity of those moments when God met me with striking clarity. I realized,

The theme of reversal is all over the Bible. Think of Job, Joseph, Rahab, the prodigal son, and Paul just to name a few. They all experienced tangible reversal. Ruth was a barren widow, but she was redeemed and included in the line of Christ. The prodigal squandered his inheritance and slept with prostitutes, but his father exalted him with lavish grace when he returned. Reversal.

God is working a reversal—a real, physical, tangible transfer of bad to good.

All of this points to the ultimate reversal. On the cross Jesus reversed the curse of sin and death. He reversed the ledger of debt, taking all of it on Himself and canceling the record of debt against me. He triumphed openly over His enemies. The reversal has been made. The victory is accomplished.

If God loves sinners enough to reverse the curse of sin and death, then surely He is reversing the badness of Jon's death. Can you see me almost leaping as I type this? Don't you just want to shout with me? "Hallelujah! What a Savior!"

God really did hammer it out in my heart that day. I can expect something beautiful—not just for eternity, but for this life also. God is working a reversal—a real, physical, tangible transfer of bad to good, not just a nebulous concept. I don't know how God is working, but I anticipate that He is.

How have you seen God work a reversal in your life for good?