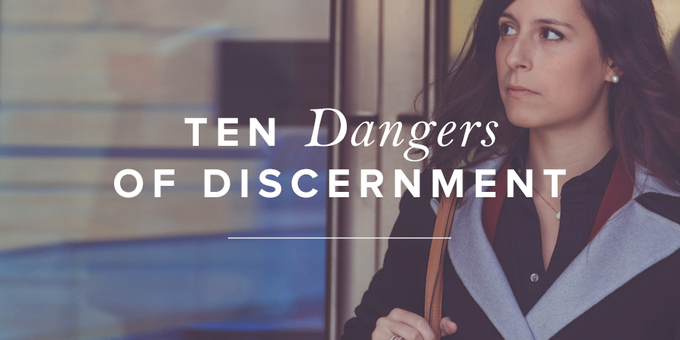 It is sad to say that the word discernment has negative connotations in the minds of many Christians and non-Christians alike, for those who claim to exhibit discernment are often those who lack love. Somehow the desire to defend the truth seems to overshadow the ability to exhibit love. Truth and love are brought into conflict rather than being equally present. In this post, we’ll look at ten of the potential dangers that seem to afflict those who emphasize discernment. We will see what can happen when discernment goes awry.

The Dangers of Discernment

1. Innocent as to What Is Evil

One of the greatest dangers of discernment is that we will become so interested in what is evil and ungodly that we allow ourselves to become immersed in it and inadvertently oppressed by the evil we encounter. But the Bible commands that we are to be innocent as to what is evil (Rom. 16:19). Our efforts in discernment should revolve around knowing the truth so that we might see the evil in contrast to what is true. Error is constantly changing, shifting, and morphing into new forms, always seeking to imitate what is true in new and creative ways. Truth, however, is constant. When we know what is true, we will more easily be able to identify what is error.

In my experience, the most prevalent danger of discernment is falling into the trap of guilt by association. In a spiritual context, it teaches that someone or something must be wrong or false simply because of the the people that support it. This is a fallacy because it is unfair and illogical to suppose that a relationship between two people, whether it is a friendship or merely a mention in a book or sermon, is a blanket endorsement of all a person writes or teaches. Guilt by association is a trap people fall into when they are lazy in their discernment. Rather than understanding the beliefs of a particular individual and comparing those to the Word of God, they judge the person based on the beliefs of another person. They irrationally associate the guilt of one person’s poor theology onto another.

Where guilt by association conveys the idea that someone or something must be wrong because of the people who support it, honor by association conveys that someone or something must be right because of who supports it. In this way we can overlook the transgressions of people we like simply because of our respect for them. We may also respect people or their teaching simply because of the teachers they ally themselves with. Like guilt by association, honor by association is a trap people fall into when they are lazy in their discernment. Instead of comparing the beliefs of a particular individual to the Bible, they judge a person’s credibility based on the beliefs of another. They irrationally associate their approval of one person on the basis of their approval of someone else.

4. The Critical and the Disputable

Another danger of discernment is ignoring the fact that some doctrine is of greater importance and greater urgency than other doctrine. Al Mohler makes the insightful observation that lowering the status of first-level doctrine to the level of disputable matters is the cause of liberalism, while elevating third-order doctrines to the status of first-order is the cause of fundamentalism.

The error of theological liberalism is evident in a basic disrespect for biblical authority and for the Church’s treasury of truth, with a refusal to admit that first-order theological issues even exist. Liberals treat first-order doctrines as if they were merely third-order in importance, and doctrinal ambiguity is the inevitable result.

Fundamentalism, on the other hand, tends toward the opposite error that all disagreements concern first-order doctrines. Thus, third-order issues are raised to a first-order importance, and Christians are wrongly and harmfully divided.

A man or woman of discernment will not allow the foundational doctrines of the faith to be lowered to the level of disputable matters. Likewise, a discerning person will not allow matters of lesser importance to ascend to positions of utmost importance.

It seems from Scripture that discernment is largely a defensive posture, one that waits for error to rear its ugly head and reacts to it in a measured and deliberate fashion. There may be times when Christians feel the need to go looking for error, and there may be people who can serve the Church by rooting it out, but more often than not, there is enough error in the world that we do not need to seek it out deliberately. Focusing our efforts in discernment in seeking out the smallest transgression will lead to spiritual oppression.

As I was discussing this topic with a friend, he shared with me this little pearl of wisdom: “Those who witch hunt end up riding brooms.” Sooner or later, Christians who spend their days seeking out and responding to the transgressions of other people can quickly become insufferable. Their attempts in discernment somehow lead them to forsake discernment.

The book of Proverbs has much to say about such people—about those who cause discord in the Church:

A worthless person, a wicked man, goes about with crooked speech, winks with his eyes, signals with his feet, points with his finger, with perverted heart devises evil, continually sowing discord; therefore calamity will come upon him suddenly; in a moment he will be broken beyond healing.

There are six things that the LORD hates, seven that are an abomination to him: haughty eyes, a lying tongue, and hands that shed innocent blood, a heart that devises wicked plans, feet that make haste to run to evil, a false witness who breathes out lies, and one who sows discord among brothers (Prov. 6:12–19).

God regards it as a grave offense when Christians cause discord within the Church, destroying the Church’s unity. While unity cannot be emphasized at the cost of the gospel, it can also not be forsaken because of the slightest disagreement. A person who continually stirs up anger and disagreement is committing an offense that the Lord hates.

6. Relying Unduly on Others

There is danger in relying on other people’s discernment and especially that of people we don’t know. The most natural context for discernment is the local church, where issues particular to a congregation can be dealt with. Those charged with discernment are known to be godly, discerning people. When we go looking to books and the Internet as our primary source of discernment, we risk being unduly influenced by people who are not truly discerning. We risk exposing ourselves to people who seek to destroy rather than edify, and who are, perhaps inadvertently, heaping scorn upon the Church. There are many people in the Christian world eager to do anonymously the work of discernment for us. Sadly, it seems that few are suited to the task.

It is easy, when attempting to be discerning, to neatly categorize people into two camps: safe and unsafe or good and bad. We then implicitly trust the people in the good camp and entirely reject anything said by those in the bad camp. To do so, though, is to ignore the common grace God gives whereby even those whose views are far different from our own can still be wise and can still speak the truth. While we need to read their words with care and discernment, we can and often should still read their words. We need to rest in the security of the Spirit’s guiding and protecting ministry in our hearts rather than in sheltering ourselves from views that do not always accord with our own. As we mature in our faith, and as we gain discernment, we will see how the hard work of being discerning, even about teaching that is not consistent with Scripture, has helped us attain maturity.

Those who emphasize discernment seem to be particularly prone to the sin of pride. As their discernment increases, and as they become able to separate more consistently what is true from what is false, they can sometimes become proud of their abilities. They may begin to crave recognition as a discerning person and may desire that the results of their efforts make them look strong and spiritual rather than lifting high the name of Jesus. They can even make discernment into an idol, giving glory to their own discernment rather than to the God who is both the source and motive of all true spiritual discernment. Those who wish to be discerning can and must emphasize humility.

There are some legitimate reasons for leaving a particular church body, but it is rare that the better alternative is to not join any church at all. Christian fellowship is an integral part of the Christian life and one that we are not free to ignore. And yet many people who emphasize discernment find themselves increasingly unhappy in their local churches and may soon find themselves hiding away, either participating only grudgingly or attempting to replace church with sermons downloaded from the Internet. But discernment does not give us license to ignore Christian fellowship and to separate ourselves from other believers. A discerning person will know and affirm the value of the local church, of accountability and of Christian fellowship. He will heed the words of Hebrews 10:24–25:

Let us consider how to stir up one another to love and good works, not neglecting to meet together, as is the habit of some, but encouraging one another, and all the more as you see the Day drawing near.

Perhaps the greatest danger in discernment is that it can be done from poor motives. Discernment can be done out of anger, a contentious spirit, a critical heart, or a desire to cause disagreement. When our discernment is driven by poor motives, it will become a negative, critical discipline rather than a positive, uplifting one. We need to see discernment as an opportunity to defend what is right and to serve other Christians. It is wise to examine our hearts and see whether we are being discerning out of good motives or selfish, unbiblical ones.

We are to speak the truth in love (Eph. 4:15), a love first for God and His truth but also a love for a brother or sister in Christ. We must not allow our eagerness to defend truth to overcome our love for our brothers and sisters in Christ. This is clearly a danger for those who are discerning and one we would do well to consider.

This post was adapted with permission from Tim’s book The Discipline of Spiritual Discernment, published by Crossway.

Previous Post How Should Christians Engage with Politics?
Next Post Weeping with Those Waiting for a Child