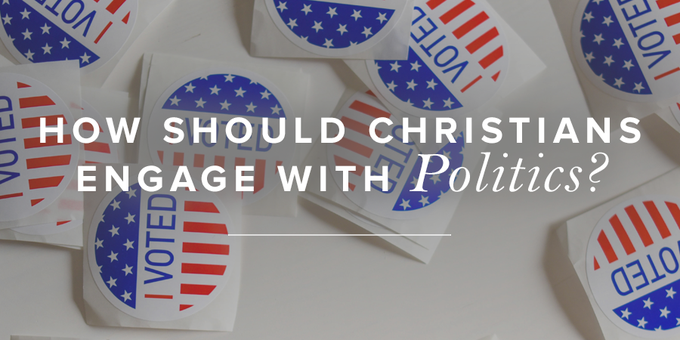 How Should Christians Engage with Politics?

If you turn on the news or scroll through Twitter, you’ll likely be bombarded with discouraging news stories, hyper-partisan narratives, and dehumanizing slander. A regular dose of news consumption can leave us feeling hopeless and divided—further perpetuating the “us” versus “them” narrative. Christians might be tempted to shy away from engaging in the public square because it can be exhausting and, at times, discouraging. I believe Christians should engage in the hard work of thinking through what involvement in the public square looks like, especially when it comes to politics.

Currently, I work in Washington, D.C. on public policy issues. I never imagined that I’d be living or working here, but the Lord had other plans. My plan was to move overseas to care for vulnerable children in developing countries. I studied International Relations in college, and I was in the process of applying to move overseas when the Lord redirected my steps to work in our nation’s capital. One of the most important lessons I’ve learned is how and why Christians should get involved in government and the public square.

The Role of Government

In Scripture, we learn that there are three God-ordained institutions. The first institution is the family. The Creation story climaxes when God creates man and woman, in His own likeness. The first chapter of the Bible allows us to read about the intimacy with which humanity was created.

So God created man in his own image, in the image of God he created him; male and female he created them. And God blessed them. And God said to them, “Be fruitful and multiply and fill the earth and subdue it, and have dominion over the fish of the sea and over the birds of the heavens and over every living thing that moves on the earth” (Gen. 1:27–28).

The next institution is government. God created the government to establish and maintain order amongst people, create laws, and seek the flourishing of people. Romans 13:1 tells us that “there is no authority except from God, and those that exist have been instituted by God.”

The last institution is the Church. In Acts 2, God gave His people the Holy Spirit, and since that day, Christians have always had God’s presence with them. Throughout the world, there are local bodies of believers who meet regularly to gather around God’s Word and grow in godliness together.

The scale of these institutions builds: First is the family (micro level); next are governments (local, state, and national levels); and lastly, the Church (global level). In all three of these institutions, the Lord tells us something about His character and the way the world is ordered. On this side of eternity, there will never be a perfect marriage, a perfect government, or a perfect church. We’re sinners who are living in a world that’s been marred by the Fall. But one day the Lord has promised to redeem all things, and we’ll live in a world where all things are made new. Therefore, because God created and cares about government, so should we.

A Right View of Government and the Public Square

When interacting in the public square, Christians should first and foremost be marked by the love of Christ and a common respect for one another. When we remember that the people we’re interacting with, voting for, and disagreeing with have an innate dignity and worth, that changes how we speak to and about one another. C.S. Lewis reminds us of this in The Weight of Glory:

There are no ordinary people. You have never talked to a mere mortal. Nations, cultures, arts, civilizations—these are mortal, and their life is to ours as the life of a gnat. But it is immortals whom we joke with, work with, marry, snub and exploit—immortal horrors or everlasting splendors. This does not mean that we are to be perpetually solemn. WE must play. But our merriment must be of that kind (and it is, in fact, the merriest kind) which exists between people who have, from the outset, taken each other seriously—no flippancy, no superiority, no presumption.

In our interaction in the public square, may we remember that every person, from the President of the United States to our next-door neighbor, is an image-bearer of the Lord. This doesn’t mean that we can’t disagree or engage in civil debates on certain issues, but it does give us a good foundation on which to stand when we engage in the public square.

American Christians are richly blessed with an exorbitant amount of freedom, but we must remember that not everyone in the world enjoys those same freedoms. According to The Pew Research Center, over 75 percent of the world’s population live in areas with severe religious restrictions, and many of these people are Christians. The fact that one person is persecuted should stir us to action, but the reality is thousands of people around the world face persecution because of their faith. Open Doors USA shares the grim statistic that Christian women experience the highest levels of persecution. They are doubly persecuted, both because they are female and because they are Christian.

We shouldn’t take our freedom for granted. Rather these statistics should propel our engagement—by voting, advocating for what we believe in, engaging in rigorous discussions about our values and principles. Not all of us are called to work in politics or in the government, but we are all called to engage at some level in the public square and to use our voices to speak on behalf of the vulnerable. How else will the world know the love of the Father if we don’t care for the physical needs of others? Our work in the public square should raise a curiosity in others about why we respond in certain ways and why we go out of our way to care for the needs of others, especially when we don’t think or believe like them.

How Should Christians Engage?

For many of us, our advocacy can start at the local level. Get to know your local elected officials, who’s on your school boards, your mayor, and your state representatives. Your impact and advocacy can have huge impacts on the local level. A simple Google search will help identify those key people in your community. Reach out to schedule a meeting and begin building relationships. You can always follow the same steps with your congressman and senators. Come prepared to talk about some issues that you’re concerned about, whether that’s current abortion laws or some other local concern.

Lastly, we should always remember that the greatest advocacy is done on our knees. May we remember to pray for our elected officials, to pray for vulnerable people in our own country and abroad, and for wisdom on engaging in current issues. Proverbs 21:1–3 reminds us:

The king’s heart is a stream of water in the hand of the LORD; he turns it wherever he will. Every way of a man is right in his own eyes, but the LORD weighs the heart. To do righteousness and justice is more acceptable to the LORD than sacrifice.

All of history is in God’s hands and under His control. In the words of Abraham Kuyper, “There is not a square inch in the whole domain of our human existence over which Christ, who is Sovereign over all, does not cry, Mine!”

So then, let us engage in the public square with boldness, conviction, kindness, and truth!

A Cartful of Hope: Sharing Our Reason in the Public Square