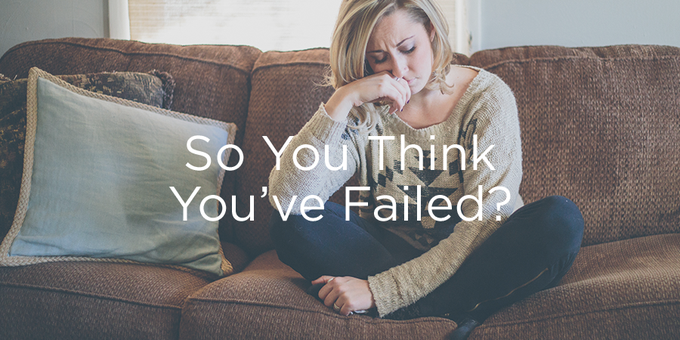 So You Think You’ve Failed?

I am a failure.

No, I'm not attempting to be melodramatic, just brutally honest. Here we are, having almost survived another school year, and instead of looking back at how far we've come, how much we've grown, and how successful we've been, the past month has provided my husband and me ample opportunities to see the ways in which we've failed.

We don't write the traditional yearly holiday letter to family and friends (in fact, we've failed to even send out Christmas cards for probably five years running). But if we had to write an honest one today, it might look something like this:

2016 so far has frequently found the Elliott family cranky and stressed, over-scheduled and unenthusiastic. The children are generally well and healthy, but we've had a few setbacks. Like our teeth, for instance. We recently brought the brood in to the dentist for the first time in two years! We were just tickled to find that between the six of them, only five opened their mouth to complete the exam, and a record fourteen cavities were discovered in those five gaping mouths. Little Joshua had eight of them all by himself and will require some sort of anesthesia to have them filled!

Speaking of Joshua, he and Lily would be starting their summer soccer program this week, except that their loving, yet stubborn, mother didn't register them one day, due to being angry that she missed the early-bird deadline and would now have to pay extra. This precluded a busy week in which Mother forgot to register the children at all. Soccer registration is now closed for the season.

The older boys are doing great, though. Seth, now fifteen, recently won first place in a statewide writing competition. When Grandma asked Mother what her grandson wrote about, Mother replied, "Um, I have no idea." Never mind that Mother is a writer herself, how could she be expected to keep track of her own writing, as well as that of her firstborn son?

We are winding down the school year and have missed homework assignments, waited until the last minute to complete projects, and one child even failed his Thirteen Colonies map test twice in one week, causing his teacher to ask Father (who happens to be the school administrator) if he might find time in his busy schedule to help his child study for the test.

Rounding out the family, Mother and Father had the privilege of attending a marriage conference a few weeks ago. Although they sparred on the way to the conference about which one was to blame for their running late, they returned refreshed and renewed. This lasted for about an hour and a half until real life hit once again.

The Failures, I mean, Elliotts

Okay, maybe I'm being a little overdramatic. But seriously, if I lined up my past weeks' successes and failures in list form, my failures would need a page the size of the Dead Sea Scrolls while my successes would have room to breathe on a Post-it note. In fact, I made numerous attempts last week to sit down and write this post, but I just couldn't seem to get it done. I failed at writing a blog post about failure. Great.

Whose Fault Is It, Anyway?

I hope you see yourself somewhere in this picture we're trying to paint. If you don't, you might sketch yourself in right now because you've just lied to yourself. I'm a failure, and so are you. Even on our best behavior, we can't go long without sinning. That's why we need a Savior.

The truth is, we serve a mighty God who has provided just that—a Savior to cover our every failure! And as much as I may prefer to view my failure through my own lens, or according to how you might see it, only His perspective is really important. So what is it? How does God see my failures?

In the broader Christian community, there are a few different schools of thought on this:

What do you think? While options one and two might sound nice, we need to concern ourselves with what is biblical. Pastor John Piper says that God sees all of our failures as sin, or at least tinged with sin's effects. Here's how he explained it:

Now that is devastating news and wonderful news, because the gospel exists for all failures . . . this is freeing because we don't have to figure out whether we have sinned or not in a failure. We can just assume we did. I mean, isn't it wonderful that David prayed in Psalm 19: Father, or God, declare me innocent from hidden faults.

In other words, David knew that he could confess his sins all day long and at the end of the day there would be some he didn't know about. And . . . the Bible calls us to love God with all of our heart and none of us has ever done that perfectly. And, therefore, every failure we have ever had of the simplest and most innocent kind has sin mixed in with it and the good news of the Bible is that is not destructive to us. We have the gospel. We have the forgiveness of sins through the blood of Jesus.

Call It What It Is

As I take to heart that devastating and wonderful reality, I begin to see my failures in a different light. Each one, from the more lighthearted foibles detailed in my letter above to the "biggies" with which each of us struggle, falls into one of two categories:

When I think of my failures in this way, it seems that most of my "biggies" fall under the heading of failing to meet God's standards. But most of the failures I wrote about in my letter—the cavities, the missed homework, the feelings of inadequacy, the marital conflict—by and large those fall into that second category.

I set up standards for myself and for others that have nothing to do with God or His Word, like insisting that my kids should have shiny, pearly whites and that my husband should make communicating with me his A-1 priority throughout his busy workday. I tend to be much more concerned with how my failures reflect on me in the eyes of others than on correcting those improper standards or asking the Lord for forgiveness.

So here's the diagnosis: I have a classic case of fear of man with the underlying condition of sinful selfishness. Perhaps you have it, too. It won't go away on its own, but there is hope, for if we know Christ, even our most crushing failures are washed with an overcoming sea of mercy.

Consider Peter, who could have been eulogized as, perhaps, the biggest failure of the New Testament, but became, for all intents and purposes, the leader of the disciples and the early church after Jesus' crucifixion (John 21:2, Matt. 10:2).

Consider Martha, whose rebuke by the Lord Jesus is firmly engrained in the heart of each of us women who chronically fail to choose "the better thing." In John 11:5 we read these words, "Now Jesus loved Martha . . ."

A murderous adulterer, an impulsive denier, an angry workaholic—failures one and all but forgiven nonetheless. Make no mistake, God hates the sinfulness in our failure, but He delights to extend to us mercy and use our failure as a part of the refining process by which He is continually molding us into the likeness of His Son, in whom He is well pleased. Thanks be to God!

Previous Post What About Your Desire to Do Something Great for God?
Next Post Articles, Resources, and More (07/08/16)

Am I a Failure?