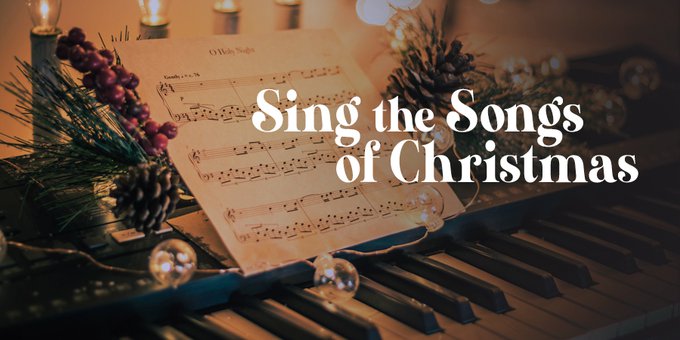 I taught English for over a decade, so indulge me as I share a brief grammar lesson. Perhaps you remember that English sentences can be classified into four different categories, based on their function. (They can also be classified according to their structure, but we’ll save that lesson for another day.) Most sentences are declarative. Like this one, they state a fact. Christmas is celebrated on December 25. Other sentences are interrogative. Did you know that these ask a question? Are you ready for Christmas? Still others are exclamatory and communicate great emotion! I can’t believe Christmas is almost here! Finally, some sentences are imperative. Remember, these give a command. Relax. Celebrate the true meaning of Christmas. See? That wasn’t so hard. I’m not even going to give you a test. Instead, I’ll invite you to meditate with me on three imperatives found in the classic Christmas hymn “O Come, All Ye Faithful.”

We find the first of our imperatives in the title of the carol itself: Come. The entire song is an invitation to “the faithful” to worship the newborn King. Perhaps that invitation seems addressed to someone else. It can’t be meant for you. After all, you can hardly be counted as “faithful.” Me neither. However, the King of Angels Himself issued the same command, and he didn’t call the faithful. He called the foolish, the weak, the broken, the misfit toys. And on that island, I can easily be at home.

The “Word of the Father” gained many followers, but few of them could be called impressive. Among His closest companions were fishermen and a tax collector—hardly names on the day’s A-list. Also, among the crowd were many who had been broken simply by living in a sin-cursed world. Jesus bid lepers, cripples, blind men, and even demoniacs to come to Him, healing them of their temporary physical maladies, while also offering healing that would last forever.

Are you broken by sin? Have you suffered at the hands of a sin-cursed world? Whether physical or emotional suffering, Christ bids you to come and find healing in Him.

One of the sweetest commands in Scripture comes from the lips of the Savior in Matthew 11: “Come to me, all of you who are weary and burdened, and I will give you rest” (v. 28).

The Babe in Bethlehem doesn’t call only the broken. He also calls out to the weary. Navigating a season of difficulty in marriage, parenting small children, caring for aging parents, battling in prayer for a prodigal child, working long hours, or juggling all the responsibilities of life, motherhood, and ministry—we all battle weariness for one reason or another. Our hearts crave rest, yet we look for it in all the wrong places: a phone, a screen, a book, a gym, or a beverage. The call from the manger is for you: Come.

The word behold doesn’t get a lot of use these days. A simple definition of the word is look. But that doesn’t quite do it justice. In our screen-obsessed world, “looking” generally means “glancing.” That’s not what the imperative Behold implores us to do. We look, yes. But we must also examine, consider, and drink in what we’re observing, like a nature-lover seeing the Grand Canyon for the first time might. We will spend eternity beholding the Savior, so my few short words will be much more like a glance. But today, even if for a moment, behold this Babe: the Lamb and the Lion.

Behold the Lamb of God

Jesus’ cousin John, who baptized the Messiah, introduced Him to public ministry with these words: “Behold the Lamb of God who takes away the sins of the world” (John 1:29 NASB).

Why would John call Jesus a lamb? As you might have guessed, it has something to do with sacrifices. John was foretelling Jesus’ once-for-all offering for sin. For generations, literal lambs had been slaughtered, foreshadowing the one death that would eternally do away with the need for more sacrifices. The author of Hebrews explains it this way:

Every priest stands day after day ministering and offering the same sacrifices time after time, which can never take away sins. But this man, after offering one sacrifice for sins forever, sat down at the right hand of God. . . . For by one offering he has perfected forever those who are sanctified. (Heb. 10:11–12, 14)

The Babe we’re beholding came as a Lamb to be the propitiation for the world. That fifty-cent word means the “satisfaction of God’s wrath.” Though not a popular topic, God is an angry God—He’s righteously angry at sin. This just wrath requires a payment. As when the public demands a just sentence for an egregious crime, God’s anger necessitates justice. It requires satisfaction. Because the crime in this case is treason against an infinite God and His eternal kingdom, the requirement for satisfaction is infinite. For this reason, sinners who die without a Savior suffer for eternity.

Jesus Christ, both God and man, could suffer in place of humans because He was human and had no sins of His own. He could suffer an infinite penalty because He was God (and therefore infinite). As the Lamb, He bore the full, eternal, infinite cup of God’s righteous wrath and fully satisfied it as the propitiation for our sins.

Behold the Lamb of God!

Behold the Lion of the Tribe of Judah

Not only is the newborn wrapped in swaddling clothes the Lamb of God; He’s also the conquering Lion.

Another John tells us about this lion. This John, one of the fishermen to follow Christ, received the most epic vision of all time: the book of Revelation. In this vision of “things which must soon take place” (Rev. 1:1), Christ gave His beloved disciple a glimpse of the future and how Christ will ultimately defeat the enemy.

As John vision begins, he’s in the throne room of heaven, and there’s a question on everyone’s lips: “Who is worthy to open the scroll and break its seals?” (Rev. 5:2). You might be wondering, Why is this scroll such a big deal? Why does John weep when no one is found worthy (Rev. 5:4)? He weeps because this scroll will usher in the kingdom. It’s the final game plan that will close out the victory. If no one opens the scroll, Satan wins. Realizing this, John weeps.

And then, a voice:

Then one of the elders said to me, “Do not weep. Look, the Lion from the tribe of Judah, the Root of David, has conquered so that he is able to open the scroll and its seven seals.” (Rev. 5:5)

The Lion has conquered. This infant who would die as the sacrificial Lamb would also rise as the victorious Lion. He defeated the grave and crushed the head of the serpent. The Lion of the tribe of Judah is worthy to open the scroll. He alone can bring about the end of our adversary. He will return on a white horse with a sword coming from His mouth that will devastate the nations and eliminate every enemy who dares raise a hand against Him (Rev. 19:11–16). He will cast the serpent and all of his minions into the Lake of Fire for all eternity (Rev. 20:10).

Finally, our hymn calls us to adore Him. As happens with words sometimes, adore has lost some of its original meaning. We have cheapened it by saying things like, “I adore your outfit.” Or, “I adore fall.” Or, “My new puppy is just so adorable!” But adore doesn’t just mean to like something in a sappy way. It actually connotes worship, reverence, fear, and awe.

Adoration is the only response the faithful could have upon beholding the Lamb. We come to Him for rest, and He gives us life. We look upon His bleeding sacrifice, and He gives us eternal glory. He is the Lion, the Lamb, the risen King, the Conqueror, Lord of lords, King of Kings, the Son of God; and in Him we have life everlasting.

And so, we bend our knees in adoration.

We adore Him with our obedience.

We adore Him with our love.

Previous Post Sing the Songs of Christmas: All Is Well
Next Post Navigating the Holidays as a Newlywed

Sing the Songs of Christmas: We Adore Thee

Sing the Songs of Christmas: All Is Well

Sing the Songs of Christmas: Immanuel—A Sign from the Lord Himself

Sing the Songs of Christmas: What Child Is This?