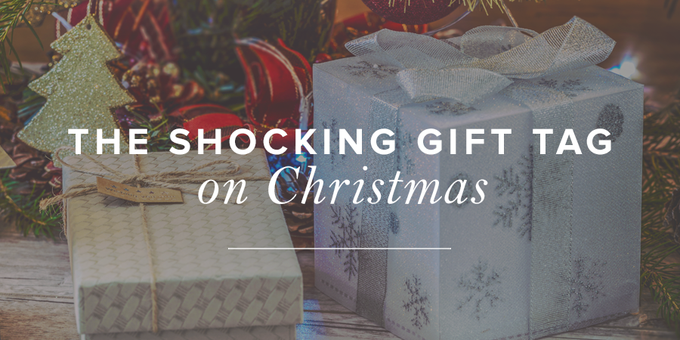 A few years ago, I came up with a tricky idea for tagging our gifts. I formulated this plan because I was frustrated by the way—in years past—my kids had figured out what was inside their packages long before Christmas morning.

They had shaken the boxes of Legos.

They had peeled back the tape and wrapping paper from the ends of new games.

And they had peeked into gift bags filled with new lacrosse gloves or swim caps.

Wrapping gifts takes an exorbitant amount of time—and that’s after I’ve spent the time, energy, and money to shop for the gifts! It seemed rather pointless if nobody was going to be surprised on Christmas morning.

So that year, I was determined to surprise my kids. Here’s how I made it happen: I put false information on the gift tags.

Suppose the box contained a new Lego set for Cade. Instead of writing “To: Cade,” I wrote, “To: Ken.” That way Cade would leave the gift alone instead of shaking it! And if a box contained a new sweater for Ken, instead of writing, “To: Ken,” I wrote, “To: Cade.” So if Cade peeled back the tape on that gift, he was sure to be disappointed. Heh, heh, heh! Am I tricky or what? I was quite pleased with the ingenuity of my plan.

To keep everything straight for myself, I wrote little symbols on the bottoms of the packages, where no one would look. For instance, my mom’s symbol was a star, because she always brightens our days. Lindsay’s symbol was a “3” because she’s the third tallest member of our family. And so on.

My goal had been to preserve the element of surprise on Christmas morning, and that I definitely accomplished. It was a Christmas of complete chaos.

Thankfully, everybody was a good sport. We did have several moments of doubled-over laughter as confused family members lifted up gifts that obviously weren’t meant for them.

The best part was when Cade, age eleven, opened an iPhone. With pure disappointment, he said, “Mom, this is supposed to be for somebody else, right?” But I told him, “No! That one’s for you, Buddy! It’s my old phone. You can use it as an iPod.”

His face registered an instant mixture of shock and incredulous delight. “It’s for me?” he asked, jumping up and waving the phone in my face. “Mom, really? It’s for me?” After repeatedly assuring him that yes, the phone really was for him, he fell back onto the couch, fanning himself dramatically, and saying, “It’s too much. I think I’m gonna faint!”

The memory of that moment still makes me smile. It was so enjoyable to delight my child with a gift he wasn’t expecting. As a parent, it’s far more enjoyable to watch my child express shock and excitement over a gift than to watch him (as in years past) open a gift he obviously wasn’t surprised by. I think God feels the same way.

God seems to love surprises. His stories never unfold like you’d expect them to. He chooses a woman who’s almost ninety (Sarah) to be the mother of a new nation. He repeatedly chooses the younger—rather than the older—son (Jacob, Joseph, David) for important roles. And he chooses men guilty of murder (Moses, Paul) to have significant leadership over His people. It’s obvious that God doesn’t want His children yawning at the retelling of His family stories. Especially not the one about the birth of His Son, Jesus.

None of this is what God’s people were expecting. And the biggest surprise about this gift is the tag. We might expect this gift from God to be marked, “To: Good People” or “To: The Most Deserving.” Instead God sends the gift of His Son “To: Sinful, Broken People.”

Picture that moment of surprise when a person first realizes that salvation through Jesus—the most valuable gift anyone could receive—is a free gift. See the look of shock on her face, mixed with incredulous delight?

Our God loves to surprise His children, especially at Christmas. And if we aren’t surprised by the gift of Jesus, perhaps we haven’t read the gift tag correctly. Or perhaps we’ve gotten used to the story a little too much.

If the truth that Jesus, God’s Son, was given to you at Christmas doesn’t make you feel faint, maybe it’s time to peel back the layers of expectation that have built up around your heart over the years. Perhaps it’s appropriate to refresh your amazement over the story of Christmas.

This Child, born to a virgin, was a gift for all people. He is God’s gift to humanity. Jesus provides the one and only way to reverse the effects of sin on humanity. That includes your sin and my sin, and all of the pain we’ve created. Through Christ, the curse of sin—which we all groan under the burden of—can finally at long last be broken! God expects this to be good news that bring each of us great joy (Luke 2:10).

Jesus is the most shocking gift that you or I will ever receive at Christmas. The more clarity we have on who Jesus is and what He offers us, the more likely we’ll be to fall back in wonder over His gift, saying, “Really? For me?”