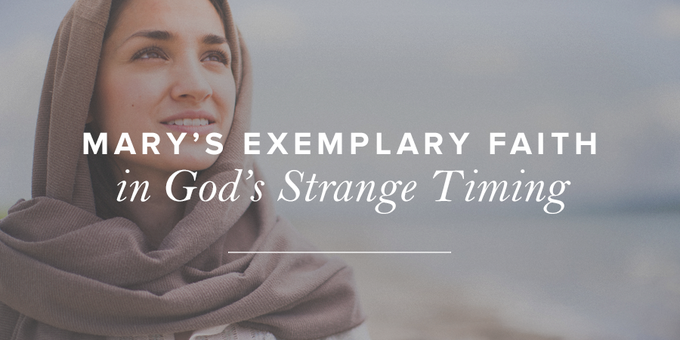 When [Jesus’] mother Mary had been betrothed to Joseph, before they came together she was found to be with child from the Holy Spirit (Matt. 1:18).

Notice that God waited until after Mary was betrothed to cause her to be “with child.” But God didn’t wait until after Mary and Joseph had come together. Pretty precise timing, right? And pretty awful timing for a young couple trying to maintain an honorable reputation.

If Mary had become pregnant after she was married, neither her reputation nor Joseph’s would have been affected. But at that point if Mary had tried to explain that her baby was from God, even Joseph would have thought she was crazy. She might have even doubted it herself!

And if the pregnancy had occurred before the betrothal, only Mary would have been affected. But without Joseph by her side as a character witness, it would have been doubly hard for anyone—us included—to believe that this baby was from God.

I think God had our faith in mind when He arranged the timing of this story. He made sure that this happened to a couple, not just a young girl. In His wisdom and kindness, God was providing tangible evidence and witnesses so that thousands of years later we would hear and believe that His Son truly was born to a virgin, just as was prophesied (Matt. 1:23).

But still. This was terrible timing for a teenage girl.

Mary was in a very vulnerable situation. She had no control over what Joseph would think, believe, or do. She couldn’t control how her parents would react or how the community would respond. Women convicted of immorality in those days were stoned (John 8:4–5). The community would gather around the woman, pick up rocks, and throw them at her!

Obviously, this pregnancy could have caused Mary an enormous amount of anxiety and agitation. However, Mary was fearless. How do I know this? Two reasons: Mary left town. And she viewed her pregnancy as God’s favor, not His curse.

She Left Her Reputation to God

Immediately after the angel told Mary about her impending pregnancy, Luke 1:39 says that Mary “arose and went with haste to the hill country” to visit her cousin Elizabeth. Can you picture Mary on the path leading out of town, her frame getting smaller and smaller just as all the gossip kicks up?

“Did you hear?” someone whispers. “Mary’s pregnant!”

“I know,” says the first friend. “And she just left town.”

When I’m worried that someone might be spreading rumors about me, I don’t want to leave the room, let alone leave town! I want to stay close and manage the situation. I want to stick around for damage control. In Mary’s shoes, I imagine myself telling the angel story repeatedly to anyone who would listen.

Instead of this, Mary left town. She left her reputation in God’s hands. She was fearless.

I confess that I am often less than fearless. Unlike Mary, I obsess over what people will think or say about me or how they will react. You, too? Especially at Christmas, with all of our heightened expectations, we can get tangled up in anxiety, with fears like:

The woman of God is fearless, not riddled with doubt or anxiety. She leaves her reputation in God’s hands, because she knows He can manage it much better than she can. Look how God took care of Mary’s reputation. After Joseph learned about Mary’s pregnancy, and as he was contemplating what to do, “an angel of the Lord appeared to him in a dream saying, ‘Joseph, son of David, do not fear to take Mary as your wife’” (Matt. 1:20).

See? Problem solved! Mary didn’t have to run a campaign to get Joseph to marry her. In fact, she was probably already out of town (with no cell phone) when Joseph came to see it her way. She fearlessly trusted God with her reputation and her future.

She Rejoiced in Suffering

My second reason for calling Mary fearless is her demeanor during the scene when she arrives at Elizabeth’s house. We might expect an average teenage girl to burst in, wailing, “My dreams are shattered! My life is over! Elizabeth, I’m . . . I’m pregnant!”

Mary could have interpreted her pregnancy this way, but she didn’t. After being greeted by an exuberant Elizabeth (who somehow not only knew that Mary was pregnant but knew it was a good thing!), Mary did what we least expect of a teenage girl. She burst into song!

Here are some phrases from Mary’s “Magnificat” in Luke 1:

Rather than being undone by the shame and sacrifice to her own personal story, Mary revels in the unfolding of God’s bigger, more glorious story—which is all about His Son! She interprets her life from this vantage point and considers this pregnancy to be God’s favor, not His curse.

Again, I confess that I don’t always maintain Mary’s perspective. When my dreams are shattered, my soul often doesn’t immediately magnify the Lord. When I tell a cousin or friend about my struggles, I don’t often (ever) sing about how “he who is mighty has done great things for me.” It’s hard to think of my trials as evidences of God’s favor. But actually, I think they are.

This is far easier to see, when I look back in life. The things that brought pain or heartache are also the things that God used to draw my attention to Him. In the absence of struggle, I’m far more tempted to put myself at the center of my story rather than connecting my story to God.

Mary was newly pregnant when she arrived at Elizabeth’s house. She didn’t have years or even months to gain perspective. Almost immediately, she lifted her eyes above the pain and sacrifice to her own personal story and considered it all from God’s perspective. She rejoiced over the role she got to play in God’s story, as the mother of God’s Son. Indeed all generations have called her blessed. And she was blessed to have this perspective.

This Christmas, God has inserted some challenges and difficulties into my life’s storyline, and I’m guessing He’s done the same for you. So how will we respond? Will we cower in fear and worry about the future? Will we obsess over what people think? Will we try to do damage control? Or will we be fearless like Mary and revel in the fact that God is inviting us to play a role in His story?

When God ordained the specific and unique timing of Mary’s pregnancy, He had our faith in mind. And in the same way, God often has the faith of other people in mind when He inserts difficulties into our lives. When we fearlessly leave our futures and reputations in God’s hands as Mary did—rejoicing even in the midst of suffering—we point others to Jesus and make our stories all about Him.

What are you worrying about today? Are you obsessing over what people think or running ahead to do damage control? What is one way you will entrust God with your reputation and future? Consider your hardship from God’s perspective. How might this difficulty be used to point others to Jesus?