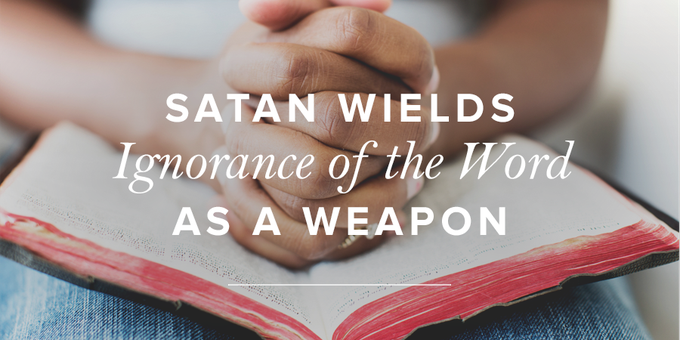 Though we have more access to the Bible than any generation before us, most Christians still have never read it all. The abundance of biblical access, on smartphones and bookshelves, generally hasn't resulted in an increased personal knowledge of the Word. And yet our generation speaks very authoritatively about God and the Bible.

Technology is a shield, providing the opportunity to say with confidence what we would rarely say in the presence of others. We can easily hide behind screens and pseudonyms touting opinions and outrage with cowardly confidence.

Lack of knowledge plus authoritative opinions: This is a dangerous combination. I'm afraid, like Hosea's audience, that if God were "to write for him [and us his] laws by the ten thousands, they would be regarded as a strange thing" (Hos. 8:12). How can we recognize what we fail to become familiar with?

Mistrust of God's Word is thrown at Eve like a grenade. This is an act of war. Like the attack on Pearl Harbor, the serpent's words are the first shot at God and His people.

In her response, Eve misquotes and subtly distorts God's clear command. She enlarges God's prohibition (neither shall you touch it), and she lessens God's punishment (lest you die, as opposed to you shall surely die).

But the serpent said to the woman, "You will not surely die. For God knows that when you eat of it your eyes will be opened, and you will be like God, knowing good and evil" (vv. 4–5).

With growing uncertainty about God and His Word, the serpent's explanation of how things are becomes attractive. That first bite of forbidden fruit was made possible by Eve's lack of knowledge of and trust in God's Word.

The same shadow of doubt is cast on God's Word today. It's always subtle, and it's always war. "Did God actually say" appears on the shelves of Christian book stores, in the words of popular online bloggers, and in the claims of Netflix documentaries. Someone on Facebook shares the "real" Greek or Hebrew meaning though it contradicts the obvious and plain meaning of easily understandable words. A writer claims the cultural context of the words carry more weight than the eternal-never-passing-away truth of them: "Would God really say that if He were writing the Bible nowadays?" And like Eve, if we remain unfamiliar with what God said, we become easy targets.

The Dangers of Ignorance

Most Christians I talk to have never read the entirety of the Bible. They may read it frequently but only parts of it. But daily reading parts of the Bible doesn't mean you know it any more than daily reading the first chapter of Moby Dick makes you an expert on the famous novel. Ignorance of the whole of God's Word makes us easy targets in the war Satan has waged against God. Lies can slip through undetected like poison gas because we're just not that familiar with the truth.

For example, when suffering comes, some will say it is spiritual attack and blame it on Satan. This doesn't seem wrong. But the Bible informs me that God does indeed bring about trouble, even and especially for His own people, for His own good purposes (Isa. 48:10–11; 2 Cor. 4:7–11). It is not that Satan is not involved (as we see in Job's and Peter's situation) but that ultimately, God is sovereign over all things.

With all the authoritative opinions around us about God and His Word, how can we recognize the one true and living God? The answer will always start not with learning to spot the counterfeits but becoming intimately familiar with the real thing.

The Marathon Pursuit of Bible Literacy

It was nearly ten years ago that I began to see a problem with telling others to read and know a book I had not read every word of myself. If I really believed the Bible is the only reliable truth in this world, maybe I should actually know what it says. While I knew a lot of it, maybe even most of it, I knew there were pages that remained untouched.

Starting in Genesis and Matthew, I began to alternate reading through Old and New Testament, verse by verse, chapter by chapter, book by book. I didn't move on until I had at least a basic comprehension of what I read and could sum up each book with what I learned about the character of God.

This seven-year marathon changed me and my walk with God. I wrestled with God over difficult passages, bringing all my questions to the table. I marveled at the unbelievable hatred His own people had toward Him as they consistently chose to follow other gods—and then grieved as I saw the seeds of the same hatred in my own heart. The light of His presence through the study of His Word changed me.

Bible reading is about knowing God on His terms, not mine. Reading every book allowed me to see the fullness of who He has revealed Himself to be without avoiding the parts of Him that I cannot understand or do not like. In addition to producing deeper joy than I have known, the subtle lies and half truths about God in our culture are now easier for me to spot and reject.

If you don't know all of the Word of God, why not attempt to change that? It likely won't happen in a year, or even five years. But have a goal to make progress—not to complete a task but to know a Person. This is about beginning a lifelong journey in knowing the God we love, the One who saved us. Your initial complete read through the Bible is hopefully the first of many.

Familiarity with God's Word is one of the best protections we have in this war the serpent still wages against God and His people. May we be so familiar with all the revealed facets of His character in His Word that each did-God-actually-say missile is easily spotted and rejected while still miles away.