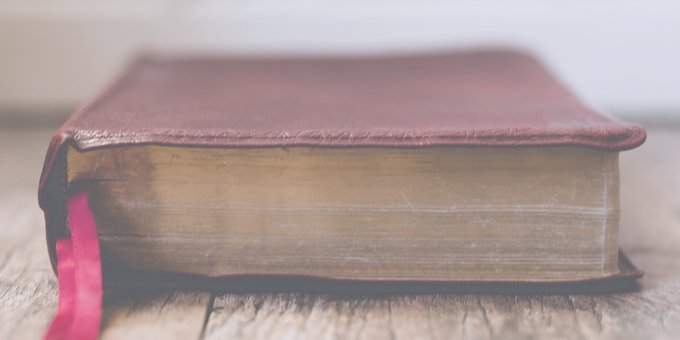 Stacey Salsbery | Salvation & My New Identity | Comments
Editor’s note: Today and tomorrow’s posts were originally posted on our “big sister” blog, Leader Connection. If you’re a leader or older woman wanting help for getting others into the Word, that is your go-to place. Head over there and subscribe!

The first verse of the Bible says this, “In the beginning, God created the heavens and the earth” (Gen. 1:1). He did this in just six days, and the work culminated with the creation of man and woman—Adam and Eve. God created them in His own image. He blessed them (Gen. 1:27–28) and placed them in Eden. In perfection God lived with man and man with God.

And the rest is history, right? Well yes, it is history, but as any of us can attest to, life did not stay that way.

Adam and Eve were tempted by the serpent, also “called the devil and Satan, the deceiver of the whole world” (Rev. 12:9), and disobeyed God. And through just one seemingly harmless act of disobedience, sin entered the world and death through sin (Rom. 5:12).

Instantly the world became a fallen place, bound with corruption and pain and evil and separated from God. No longer was Eden a paradise but a perversion of all mankind was intended for—the glory of God, the presence of God, the righteous and holy will of God.

What would God do? Yell at them? Turn His back on them? Zap them into oblivion?

God Showered Them with Compassion

In mercy and grace, God called to Adam and Eve, “Where are you?” (Gen. 3:9) though in His sovereignty, God knew exactly where they were—they were hiding. Yet God did not simply curse Adam or Eve for their revolutionary mistake and walk away. Instead, He clothed them and in a final pronouncement to the serpent gave them a clue to the depths of His great love.

Before God ever spoke to Adam and Eve of the consequences of their actions (weeds, striving, pain, and suffering), He spoke of hope. An offspring of the woman would one day crush the head of the serpent. But when? And how? And who?

I’m sure they pondered these questions often. The Messiah was not revealed outright, but instead, the promise of His coming was handed down and believed. Generation after generation took God at His word.

Notice Eve’s declaration at the birth of her firstborn son Cain, “I have gotten a man with the help of the LORD” (Gen. 4:1). A man! An offspring! Could this be the one?

Yet Cain too fell into sin and murdered his brother Abel. Then God blessed Eve with another son, Seth, of which she declares, “God has appointed for me another offspring.” I love her hope, don’t you? She was actively looking for the Redeemer.

Seth, however, was not the man who could redeem her. But the thread of this mysterious Redeemer that God had promised continued through his family line to Noah, who was a righteous man like no other in his day. God was grieved by the infestation of sin in the world and decided to wipe the face of the earth clean with a worldwide flood, saving only Noah and his family and two of every kind of animal in an ark.

Then, after this catastrophic event, God tells Noah’s three sons, Shem, Ham, and Japheth, to “be fruitful and multiply and fill the earth” (Gen. 9:1). In other words, have lots of babies and spread out! But as is the way of sinful man, their descendents didn’t follow God’s decree and instead sought to stay in one city instead.

So God dispersed them Himself by mixing up their languages. Then God called out one man from the line of Shem, Noah, and Seth—Abram, whose name was later changed to Abraham—by telling him to leave his country and his people and go to the land God would show him. God promised to make Abraham into a great nation there and bless all the families of the earth through him. How? The Messiah, the offspring of the woman—the promised serpent crusher!

Isaac was born to Abraham at 100 years old, and Isaac fathered twin boys, Jacob and Esau. God chose Jacob to carry the promise of deliverance and future blessing. In time, Jacob had twelve sons, who became the twelve tribes of the nation of Israel. Through famine and God’s sovereignty (see the story of Joseph in Genesis 37, 39–45), Jacob’s growing family sought food and protection in the land of Egypt, where they multiplied greatly and became slaves of Pharaoh.

In oppression, the people of Israel cried out to God, and God heard them and sent Moses, God’s chosen deliverer, to rescue them and bring them out of Egypt and to Himself. (It was a micropicture of a much bigger rescue plan that God was slowly weaving through history—our own salvation.)

Ten plagues later (see Exodus 7–12), with the false gods of Egypt conquered by the true God of creation, Moses led the Israelites, loaded with plunder, out of Egypt and into the desert. There God spoke directly to the people, giving them the Ten Commandments and the laws they were to live by.

He would be their God and they would be His people. Yet they failed right from the start by making and worshiping a golden calf while Moses was receiving God’s instructions atop Mt. Sinai. Yet Moses interceded on behalf of the people, just as Christ does for us, and after forty years of wandering in the wilderness, God allowed Joshua to lead the people into the Promised Land, otherwise known as the land of Canaan.

It’s at this point in the story I’d like to tell you the people of God were grateful to God for giving them the land, but instead they were unfaithful. (Again.)

Yet God’s Mercies Are New Every Morning

Over and over God gave the people the opportunity to recognize their sin and return to Him. God sent various judges to helpIsrael get back on the right course, but they wouldn’t listen. Instead, they begged God for a king. Surely that was their problem—never mind their incessant idolatry—they needed a king like everyone else had.

The first kings were Saul, then David (who wrote many of the psalms), and then David’s son Solomon. Solomon was the wisest man ever to live, but he did not wholly follow the Lord, and therefore neither did his children.

But God continued to be patient with His people and sent many prophets to warn them of a coming judgment if the Israelites did not turn from their wicked ways. For example, Isaiah prophesied God’s words to kings Uzziah, Jotham, Ahaz, and Hezekiah in Judah, while Elijah and Elisha prophesied to the kings of Israel. The prophet Jeremiah took his turn in Judah, then the prophet Ezekiel, and then another prophet and another, on and on. Yet the Israelites would not listen to the prophets either.

Just as They Would Not Listen to God

So the LORD, faithful to His word, sent judgment on His people through their enemies. The Assyrians overtook the northern kingdom in 722 BC and the Babylonians overtook the southern kingdom in 586 BC. After seventy years of exile, the Jews, led by Ezra and Nehemiah, were allowed to return to their homeland to begin the rebuilding process. They remained under heavy taxes by the Persian kings. Eventually the Greeks, led by Alexander the Great, conquered the Persians. And after that the Jews were ruled by the notorious Roman Empire.

And so, the devastating effects of sin continued to coil their way through each generation of humanity, but at the same time, so did the everlasting love of God. God never went back on His promise to send a serpent crusher to rescue them. He faithfully wove His promise to Eve through the lives of Abraham, Isaac, Jacob, and King David.

God had promised to David, “I will raise up your offspring after you, who shall come from your body, and I will establish his kingdom. . . . [H]e shall be to me a son. . . . Your throne shall be established forever” (2 Sam. 7:12–17). It was another promise for the people of God and another piece of the puzzle.

After years of silence from God, His promise was fulfilled through the birth of God’s own Son, Jesus Christ, when the Israelites least expected it, in the bustling, yet sleepy town of Bethlehem. At last, the offspring of woman, born of God and not through man, sent by God because of man’s sin, graced this world with His presence and all the host of heaven sang.

And so “the Word became flesh and dwelt among us” (John 1:14), in order that Christ could die among us, offering up His own blood for the propitiation of Adam’s sin and ours. He crushed the head of the serpent:

Through death he . . . destroy[ed] the one who has the power of death, that is, the devil, and deliver[ed] all those who through fear of death were subject to lifelong slavery. (Heb. 2:14–15)

That, my friend, is the story of the Old Testament and the great compassion of God that never ceased, though the sin of man continued to increase. “For God so loved the world, that he gave his only Son, that whoever believes in him should not perish but have eternal life” (John 3:16).

Come back tomorrow for the story of the New Testament—in one post!