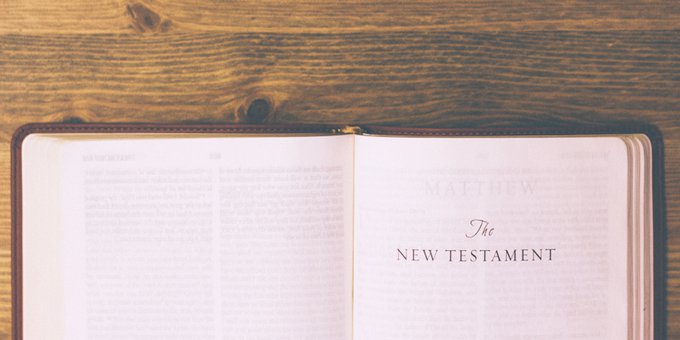 While the Old Testament leaves us with a cliffhanger—will the promised Messiah ever come?—the New Testament explodes with His arrival, beginning with the account of Christ’s life, ministry, death, and resurrection in the four gospels: Matthew, Mark, Luke, and John. Each one portrays Jesus from a slightly different vantage point.

While Matthew focuses on Christ as the fulfillment of God’s promise to Israel, Mark’s gospel adds a different angle. Written primarily to a non-Jewish audience, Mark portrays Jesus as a servant of God, sent to perfectly accomplish the will of God.

Luke’s gospel, however, reveals Jesus as the perfect example of humanity by tracing His genealogy all the way back to Adam. And John’s gospel confirms the deity of Christ, who was not just a man but the eternal God.

Though each gospel portrays Christ from a slightly different view, they all point to the same thing: the good news of Jesus Christ as our Lord and Savior.

God Was Faithful to His Promise to Send a Redeemer

This is the good news talked about over and over again in the New Testament: Jesus Christ, who is God in the flesh, came to pay the penalty of our sins through His death on a cross. He conquered sin and death through His resurrection, so that by grace through faith, we who are in Christ can bear the righteousness of God, instead of the ugliness of sin, and thereby live with God forever in heaven.

All of us. Not just the Jews, but every soul, of every nationality, who is reconciled to God through Christ will be saved. Not because of anything we have done, but because God so loved the world.

God Sent His One and Only Son

Jesus was God’s Son, born to the virgin Mary. We know little of His growing up years, except that He “increased in wisdom and in stature and in favor with God and man” (Luke 2:52).

From Christ’s baptism to His resurrection and ascension into heaven, it is widely accepted that Christ’s earthly ministry lasted about three and a half years. During that time, He was busy performing miracles, healing the sick and demon possessed, teaching in the synagogues, facing off with the Pharisees, investing in the disciples, instructing the crowds, dining with sinners, and ministering not only to Jews, but to Gentiles and Samaritans as well.

Each miraculous account proved the authenticity of His claims—that Jesus and the Father are one in the same. These miracles culminated in the ultimate proof that Christianity built on: His resurrection. Our God is not dead. Christ is alive, holding all things together—including His Church—and is currently seated at the right hand of the Father.

When the resurrection took place, not many believed it. A group of 120 believers, led by the Apostle Peter, waited in Jerusalem for the promised Holy Spirit. These believers did not know what to do except devote themselves to prayer.

This was the start of God’s Church. The odds were not with them, but God was. And God sent His Spirit to indwell them on the day of Pentecost.

It was a twist no one saw coming. For prior to Christ’s death and resurrection, being in the presence of God was not possible. So the idea of God’s presence indwelling sinful man—it was astounding. Yet it was and still is God’s plan for the kingdom of God to not just dwell with mankind but in mankind.

God Gave Us His Spirit

Filled with the Spirit of God, the apostles began preaching the good news of Jesus Christ to all who would listen, and many believed. Through the effort of only a few, along with the work of the Holy Spirit in the hearts of men, Christianity began to spread like wildfire and the Church grew.

But along with that, so did persecution. Stephen is recorded as the first martyr—a believer killed for his faith. His murder opened the door for violent aggression against all who professed faith in Christ. However, what man meant for evil God used for good. Acts 11:19 says, “those who were scattered because of the persecution that arose over Stephen traveled as far as Phoenicia and Cyprus and Antioch.” God used the scattering of His people by persecution to further the spread of the gospel.

One persecutor of the Church was Saul of Tarsus. Acts 8:3 states, “Saul was ravaging the church, and entering house after house, he dragged off men and women and committed them to prison.”

Then one day on the road to Damascus, while Saul was on his way to persecute more Christians, Christ revealed himself to him and physically blinded him for a time. After this experience, Saul gave his life to Christ. Saul then changed his name to Paul, and followed God’s instructions to carry the gospel to the Gentiles. The apostle Paul became one of the greatest missionaries of all time.

While the apostle Peter (along with James) held leadership in the Jerusalem church, ministering mainly to Jews, Paul took the gospel to various cities on three different missionary journeys.

Always Following the Leading of the Holy Spirit

By living for God’s will and purpose alone, Paul’s relationship with Christ set the example for all who were to follow. As he invested in believers, Paul grew to love God’s Church as Christ himself loves the Church. He pleaded with God for their endurance in the faith. He prayed often for the Church and instructed them through Spirit-inspired letters. These letters are referred to as epistles, and they make up a majority of the New Testament. It is believed that the first letter that Paul wrote was Galatians, to the church in Galatia. That was followed by twelve more letters to various churches and church leaders.

Some of these letters were written while Paul was in prison. I’d say it’s a good thing God gave him uninterrupted time to write! (As a writer, I know how hard that can be.)

But Paul’s words weren’t just meant for them, but for us as well. To the church in Thessalonica Paul said this, “And we also thank God constantly for this, that when you received the word of God, which you heard from us, you accepted it not as the word of men but as what it really is, the word of God” (1 Thess. 2:13). Each letter was penned under the inspiration of the Holy Spirit.

Yet the apostle Paul is not the only one who wrote Spirit-inspired letters that were included in the New Testament. James and Jude, the brothers of Jesus; the apostle Peter; and the “beloved disciple” John also wrote the Word of God through letters.

While exiled to the island of Patmos, God also gave a special revelation to John of prophetic events still to come. The visions John saw are recorded for us in the book of Revelation—the last book of the Bible—disclosing to us a picture of eternity when God will reign with man.

The New Testament Is All About Being Christ’s Kingdom

How gracious of God to give us His Word through these men. For “All Scripture is breathed out by God and profitable for teaching, for reproof, for correction, and for training in righteousness” (2 Tim. 3:16). The believers in the New Testament churches struggled with the same sins and temptations that we do. Our culture may be different, but our flesh is not, and neither is our God.

Yet God has given us His Spirit along with His Word to show us how to live this life for His glory. While the Old Testament focuses on the coming of Christ’s kingdom, the New Testament focuses on being Christ’s kingdom. As each New Testament book makes clear, the believer’s goal is to live each day in holiness to God. Why? So the world can know and see the excellencies of Him who called us out of darkness into his marvelous light (1 Peter 2:9).

Bearing fruit for God through the power of the Holy Spirit is our calling until the day Christ returns to set up His earthly throne—as the Jews assumed Christ would do the first time He came.

Not unlike the Old Testament believers, we too look forward to the coming of God’s anointed one. The difference is we know who He is. He is the Son of the one true God. He is Jesus Christ, the Word made flesh, our Savior, who was and is and is to come.

He is the radiance of the glory of God and the exact imprint of his nature, and he upholds the universe by the word of his power. After making purification for sins, he sat down at the right hand of the Majesty on high. (Heb. 1:3)

This is the message of the New Testament. It’s flanked by a story that’s still being written, a story we the church have been invited into. For great is the love of God from Eden to eternity that we, sinful people, should be called children of the Most High God.