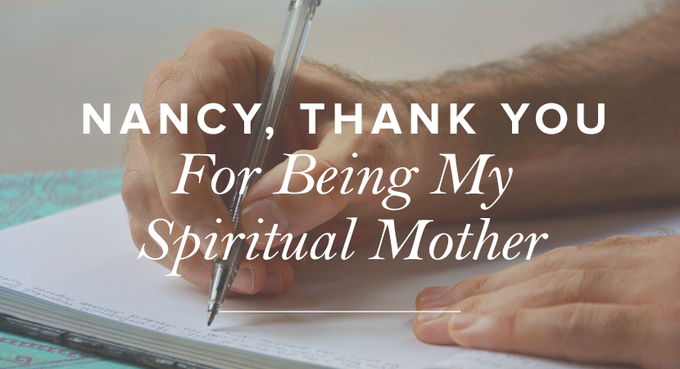 Nancy, Thank You for Being My Spiritual Mother

Several years ago, Nancy received a surprising letter . . . wishing her a happy Mother’s Day. We want to share this note with you today so you, too, can be encouraged by the transforming power of God’s grace.

I am writing to thank you, for you have given me two very important things that I have never possessed as far back as I can remember. I am twenty-six years old and have come to the Lord in the last couple of years. The Lord is doing some wonderful things in my life, and I hope to someday serve Him full time.

Miss DeMoss, before I began listening to your program (I know it is a women’s program, but I enjoy listening to you for reasons I will explain), I had little to no trust for women and very little understanding of what a true woman of God was. On both my mother’s and my father’s side of the family, my grandparents had all been divorced and remarried—some more than once. My grandmother on my father’s side used her alimony to open up two topless clubs in the ’70s. My mother met my father in one of his mother’s clubs, and eventually they married. They divorced after this, and my mother was married two times and divorced two times in the years that followed.

My Relationship with My Mom

My mother was a working woman. When my sister and I were children, she worked two jobs full-time to support us, and I realize the great responsibility she had as a single mother. I realize how much she loved and still loves us, but she didn’t know the Lord and because of that it was hard on us all.

When we were six, eight, and nine years old, the only time we got to spend with our mother was when she was home from work, but she was worn out and could only sleep. My sisters and I would play in and around her bed when she was home. We could have played anywhere else in the two-bedroom apartment or even outside, but I realize now that we played in mom’s bedroom when she was home because it was our only way to be close to her, the only time to be with her.

Later she married and instead of staying at home or just working one job, my mother used the spare time she had to go to college. Everyone in the family was proud of her, but it left little time for us. Maybe when her schooling was finished we would have more time with her, but this was not to be either. After graduating from college, mom began to climb the corporate ladder, working sixty, seventy, and sometimes eighty hours a week to get ahead in life—just keeping up with the Joneses.

I’ve grown up since those days. I’ve learned a great deal the hard way. The relationships I’ve had since my teens with various women have never once been healthy. It was one bad relationship after another that helped me decide at an early age to forgo all non-sexual relationships with women, and this attitude only brought greater mistrust and deeper pain into my life.

Even after coming to the Lord, I made the decision not to ever be married. I would tell myself, when I thought about it, that I was giving that up to serve the Lord, that all I needed was Him. But in truth, it was because of the great mistrust I had for women.

Do You Know What Year It Is?

I began listening to your program because of a testimony you had on a couple of years ago. I don’t remember the woman’s name, but she was an orphan who was badly mistreated but clung in her youth to the word that God loved her and overcame the trials of her life. As I listened in the following days, I realized that your program was for women, but I decided to listen to you anyway. I try to get as much of the Word as I can, and I was curious as to what you were saying that was supposed to be just for Christian women.

Now, you have to understand that I had heard, read, and knew what the Word of God said to and about women and their roles in the church and family, but I had never heard a woman say it! To be honest, the more I listened the more astounded I became at the things you were saying in the twenty-first century. Does Miss DeMoss know what year it is? I am laughing now, but let me tell you what else I heard.

Listening to you speak, I began to hear the cry of a true woman who sought to glorify God with her life. As I listened to you speak on topics like holiness and righteous living, a tiny little crack began to run through that rock-solid belief that women could not be trusted and would only hurt me if I allowed myself to be taken in by one. Today, that crack is busted wide open, and now that it is exposed, I can deal with the things in my life that created those misguided notions.

What You’ve Given Me

You have given me the ability to trust again. Since listening to you, I have also begun writing my mother again; I hadn’t written to her in more than two years. She actually writes me back quite frequently, and as I build that relationship with her, I am giving her verses to read in an attempt to be some kind of witness to her.

Just as important as these two things, you have given me an example of what kind of woman I should be looking for when it comes my time to marry in the years ahead. And having not only an example of what a woman of God looks like but a desire to be married to one, you have provoked me to become a better man because I know that I will never be married to a woman with a spirit like yours unless I have a heart to do the will of my Father.

You have given me all these things. They were things that only a woman can give a man, things that a mother should inspire in her son. Because of this, I thought it an appropriate gesture to tell you these things and to wish you a happy Mother’s Day. In my heart, you will always be one of my mothers in the Lord (Mark 3:34–35). And I’m no momma’s boy, but I do enjoy hearing you speak. So I will continue to listen to Revive Our Hearts now, and someday in the future maybe I’ll have a wife who will listen with me.

Thanks for everything you’ve done for me and that you do for men and women all across our nation.

PS: By my address, it should be obvious that I am in prison. Please pray for my continued victory in the Lord and future ministry, whatever that may be. I’ll be getting out in only a few more years now.

We don’t know the rest of this man’s story, but God does. As this letter shows, His grace can reach and transform the hardest places. But Scripture tells us, “How then will they call on him in whom they have not believed? And how are they to believe in him of whom they have never heard? . . . Faith comes from hearing, and hearing through the word of Christ” (Rom. 10:14, 17).