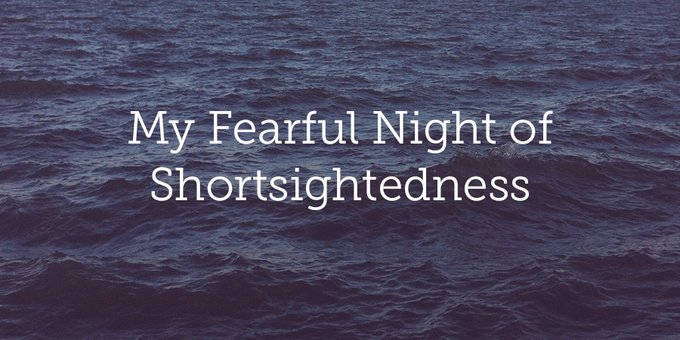 My Fearful Night of Shortsightedness

Last week I boarded a plane headed for Los Angeles. Eager to embark on my first vacation without kids since having them, I cashed in my air miles to join my husband who was attending a pastor's conference in the area.

Our apartment rental was near a little slice of paradise. White golden sand met aqua waves on an endless sun-kissed shore. I spent a great deal of time on this beach, walking, reading, and watching the sun set.

The first evening my husband and I strolled the beach after dark. I felt like a teenager on a clandestine outing until I realized it was 6:30 p.m. The moon was full and the tide was high, and I was surprised by the fear bubbling up in my belly as I gazed on the dark watery mass before me. The velocity and thunderclap of the waves breaking, the sheer massiveness of the ocean breadth and unknown depths made me feel vulnerable. And small.

The God of the Bible is intensely personal.

The dark wall grew in height and force until it broke in a crescendo of foam that reminded me of a stampeding herd of wild horses. Maybe I've seen too many sinking-ships-in-a-thunderstorm-type movies, but the waves unsettled me.

The next morning I opened my Bible to Psalm 29 and read these words.

I realized that the waves were a signpost. They spoke of God's power, though displayed through the veil of nature.

So the next evening I planted my beach chair in the sand facing the imposing waves. My husband was at a pastor's conference, and I was alone to contemplate and pray. This time I felt some fear, but also exhilaration. God's power on display was beginning to delight me.

I had trembled at God's raw power on display because it reminded me of His Otherness—His holy, transcendent nature—which so sharply contrasted my own finite frame.

But as I continued praying, I remembered the gospel. I remembered that God cares for me personally. So much so that He sent His own Son to die for my sin (Rom. 5:8).

The glorious display of God's power in nature does not diminish His personal dealings with His creation. The King of the universe values each bird that falls from the sky and keeps every one of my tears in a bottle (Matt. 10:29; Ps. 29:10, 56:8). The God of the Bible is intensely personal.

Our circumstances only make sense when we hold both aspects of His character in our sightline.

This is not to say that natural disasters can't hurt us. In 2013, my town was flooded. I lost my home and my family was displaced for nearly a year-and-half afterward. Needless to say, it was a difficult season. But God is not an impersonal force, and these things do not happen by random chance. They happen for a reason. And they happen within the boundaries of God's power and love.

So as I stared at the dark waves, I realized my mistake. I was afraid because I was shortsighted. God cannot be summed up in one character trait. He is both powerful and personal. Transcendent and immanent. I could not make sense of my fear until I saw both sides of this coin.

And this is true in all of life, isn't it? Our circumstances only make sense when we hold both aspects of His character in our sightline.

Do you tend to emphasize one aspect of God's character above the others? Do you know that He is powerful to save, and He also loves His children very much?