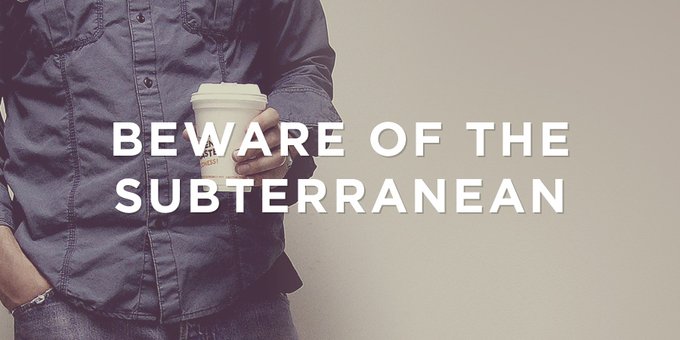 Beware of the Subterranean

She held the small booklet in front of my face and shook it as she spoke emphatically. Her tone was angry, but not quite to the volume of yelling. "How dare you hand this out! How dare you ask women to study this book! I will NOT be attending, and I doubt any of the other women will!"

At twenty-one years old, I had never come face to face with a "subterranean" before. This was my first encounter. Subterraneans work below the surface, have a destructive impact on the church body, and may appear on the surface as your biggest supporter. I didn't have a clue about "subterraneans" when I was growing up; in fact, I was so naïve when I became a pastor's wife that I was still under the delusion that most people in church were Christians.

I believed that Christians usually acted like Jesus. I had a lot to learn.

The dangerous booklet I passed out was Dawson Trotman's Born to Reproduce. (You can read it yourself here.) It was a simple booklet on evangelism and discipleship. It's been a helpful resource for about six decades. She didn’t tell me why she opposed the booklet, and I didn’t ask her.

I just stood there with my mouth open, dumbfounded and silent.

This poor woman kept to her word and never attended any of the Bible studies, even when I used more "acceptable" literature. It was a small church, and my husband was the pastor and sole staff member. Traditionally, the church had been deacon board led rather than elder led, and her husband was chairman of the board of deacons. She is no longer living, and I've not had contact with her since we left that church in the early 1980s, but I hope that she didn't continue in life as bitter and unhappy as she appeared to be when I knew her.

Marks of a "Subterranean":

What Should We Do About "Subterraneans"?

We must guard our own hearts and minds—knowing that we can be deceived or indulge in sinful suspicions and destructive paranoia. We can react in unrighteous anger and are susceptible to the same sins as the "subterranean," so we must continually remind ourselves that we are in a spiritual battle and are not at war with any individuals; our battle is with spiritual forces:

What Is Our Responsibility?

We reached out to the lady who vented to me about the women's Bible study. My husband and I attempted to build a friendly relationship with her and her husband, and although her husband was open and willing, she made it very clear that she wanted nothing to do with us. In fact, she told my husband, "We were here long before you came, and we'll be here long after you're gone. We're just biding our time until you leave." Ouch.

We were young and inexperienced. We didn't leave the church because of this poor woman's threats, but God was in the process of moving us to another state for additional schooling when her control issues surfaced. I regret that although we reached out and attempted to develop a good relationship with them—it never happened—and although we attempted a biblical rescue mission, that didn't happen either. The church leadership wasn't willing to get involved.

The point of my post today is not to place suspicions in your mind toward individuals in your church, but to encourage you to be prayerful and diligent in your relationships. Pray for your pastors, elders, deacons, and others in leadership. Pray for their wives and children.

And please beware that you do not function as the "subterranean" within your congregation!