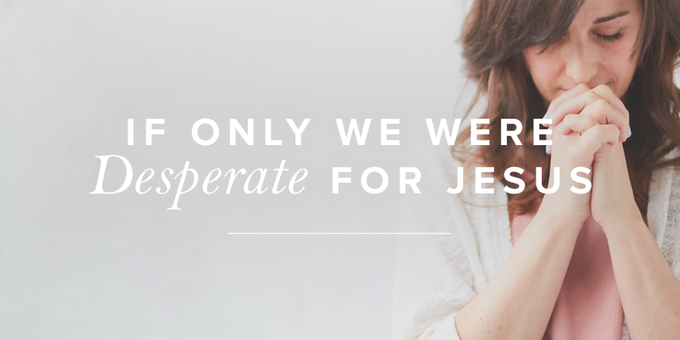 If Only We Were Desperate for Jesus

How desperate are you for Jesus? No really, how desperate are you? To what lengths are you willing to go to be close to Him? What’s it worth to you? Your reputation? Your job? Your sleep? Your time? These are the questions that pulled at me like a strong riptide after reading the account of four friends who carried their paralytic friend to Christ (Mark 2:1–12). When they got to the house where Jesus was teaching, they couldn’t get to Him. The crowd was thick, and there was no way in.

But they didn’t give up; they were determined. How far had they walked, I wonder? How tired were they? It couldn’t have been easy. I’m picturing those four friends conferring outside the overflowing front door. What should we do now? Apparently, asking people to move out of the way wasn’t an option. Nor was explaining how far they’d come or that their friend was in dire need of healing. The roof! Yes, that was the answer. “And when they could not get near him because of the crowd, they removed the roof above him, and when they had made an opening, they let down the bed on which the paralytic lay” (Mark 2:4).

Their Faith Pushed Them to Stop at Nothing

We’ll take him down through the roof, they decided. Were all four friends in agreement? And what of the paralytic? Was he okay with the idea? I mean, they could have gotten in big trouble. After all, it wasn’t their home. Were they willing to pay for the repairs? Were they willing to go to jail if charges were pressed?

Then there’s the question of how they did it. Roofing material in those days generally consisted of branches and sticks combined with clay. So, we’re not talking shingles. But according to Luke 5:19, there were tiles. Was it just that easy—simply removing some tiles? Or did they take a brief jaunt to the hardware store to buy some tools? I don’t know about you, but I don’t tend to carry roof cutting tools around with me. Although to be fair, I haven’t searched the bottom of my purse in a while.

Yet it didn’t matter. These friends were determined to get to Jesus. Nothing was going to stop them. Not a long and tiring walk, not a crowd, not the law. Which begs another question: why?

Because They Knew Jesus Was the Answer

Maybe they’d seen Jesus heal others or maybe they’d only heard of it, but their determination had to have stemmed from a deep knowing. Or better yet, a deep faith. Mark 2:5 states, “And when Jesus saw their faith, he said to the paralytic, ‘Son, your sins are forgiven.’”

Hear me on this, sweet sister: the depth of our faith determines the distance of our drive. How far are we willing to go to get to Jesus? Are there dimensions to God’s love? No, it exceeds death and life and height and depth (Rom. 8:38–39). “For as high as the heavens are above the earth, so great is his steadfast love toward those who fear him; as far as the east is from the west, so far does he remove our transgressions from us” (Ps. 103:11–12). If only we’d have a faith to match—a knowing so deep, it could rival the unending depths of God’s love.

And yet Jesus tells us in Matthew 17:20 that if our faith is even the size of a mustard seed, we can move mountains. It doesn’t take much, because we’re not the ones who do the moving. It’s God and His power at work in us that makes those daunting mountains move. Were it up to our faith and not God’s power, this world would be in dire need of us; yet it’s not us this world needs—it’s our Savior, Jesus Christ.

So, Let’s Be Desperate for Jesus

Let’s make that our goal. No matter how far we walked that day or the day before, no matter how much sleep we didn’t get or how weary we feel, let’s find a way to get to Him. Let’s not give up when the obstacles are daunting, the doorway is closed, or the crowd is overwhelming. Aka our kids won’t leave us alone, our job is too demanding, or we don’t see the clear path we had hoped for—the one we thought we deserved because we got up early and put the effort in!

Yes, those four friends had faith, but more than that, they were desperate to get to Jesus. Willing to stop at nothing, they risked their reputation. Do you know who was in that room with Jesus? “Pharisees and teachers of the law” from not only Galilee and Judea but also Jerusalem (Luke 5:17). These were people with power and grit and the ability to drag them before the Sanhedrin. But did those four friends care? No. Their reputation mattered little compared to their determination.

“Behold, I am the LORD, the God of all flesh. Is anything too hard for me?” (Jer. 32:27). Of course not, so whether it be with the simple details of time or statistics or the hard heart of a loved one, let’s press on to Jesus, daily carrying our fears, our dreams, our kids, and our loved ones before the throne of God. In holding fast to the path that leads to righteousness, we can’t give up.

Because God Is Found by Those Who Seek Him

Their determination resulted in an act of God so marvelous, they left “amazed and glorified God, saying, ‘We never saw anything like this!’” (Mark 2:12). Their friend, the paralytic, not only received physical healing but also spiritual healing. Their desperation collided with more than they ever could have imagined and concluded with a God-given declaration (Mark 2:10–11).

The Lord says in Jeremiah 29:13, “You will seek me and find me, when you seek me with all your heart.” God doesn’t hide Himself from us. He’s simply waiting for us to seek Him with a heart that is ready to see. James 4:8 says, “Draw near to God, and he will draw near to you.” What a beautiful promise! God doesn’t say, “Once you gain enough faith, I’ll reveal Myself.” No, instead He has declared, “Seek me and you will find me!”

In other words, be desperate. Do whatever you have to do to get to Jesus. Set up accountability. Have a friend walk beside you. Get up early or stay up late to be in God’s Word. Memorize verses, placing verse cards in strategic locations. The Word of God is our avenue to Christ. Don’t let the obstacles derail you, diminishing your determination. With an enemy who prowls about like a roaring lion (1 Peter 5:8), we can be sure there will be obstacles, but with God there is always a way.

Forgiveness stands ready at the throne of grace. Marvelous wonder awaits us in the presence of our King. It may not be as easy as we thought. There may need to be some roof digging or some plan adjusting, but the important thing is that we get there. Whatever the cost, whatever the sacrifice, Christ is worth every step we must take.

So, let’s be desperate for Jesus. Let’s stop at nothing friends, with a deep knowing that Jesus is the answer.