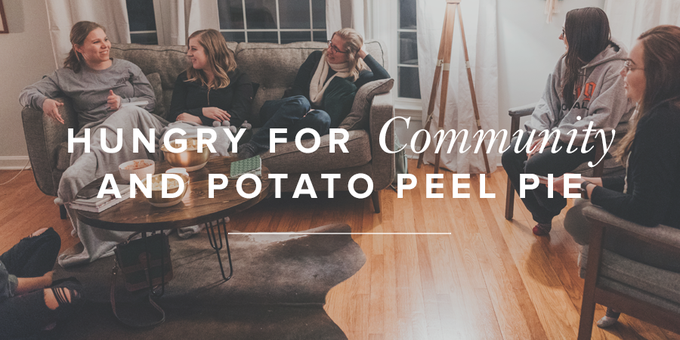 Laura Elliott | Church & Worship | Comments
Refresh your relationships with help from today’s post as we continue in our series on refreshment. (And you can get more fresh truth—and give toward Revive Our Hearts’fiscal year-end need—by requesting a copy of the Refresh Journaling Set with your gift of any amount this month.) —Hayley Mullins, True Woman Blog Content Manager

What are you hungry for?

It’s a common question, one that I find myself asking as I stand in front of the fridge and answer with “ice cream” far too often. I’m a foodie, a writer, and a bit of an anglophile, so perhaps that explains how an easy afternoon movie that begs that question changed the way I answer it.

Last month I was waylaid by two surgeries that earned me a week of doctor-ordered couch time. Being unaccustomed to hours at home alone, I did some Netflix surfing and then settled in to watch The Guernsey Literary and Potato Peel Pie Society. I expected it to be a nice distraction, but it was more than that. Something captivated me about the film’s simple story of connection between a group of neighbors during and after the Nazi occupation of Guernsey.

The next day I watched it again.

In one of the movie’s first scenes, an oddly matched band of townsfolk gather around a table that had contraband at its centerpiece: a steaming platter of sizzling, decadent pork. These people had not eaten meat in months, since the Nazis had whisked away their pigs and cattle and replaced them with potatoes. As viewers, we eavesdrop on the intimacy of the moment as we hear the lightly crackling sear of the meat and watch characters we’ve just met linger over the vapors of the pork as if to bathe in the steam of memories far removed. They share glances, sighs, smiles, laughter . . . oh yes, and the meal. Pure joy.

But why such intense commonality among a group containing an old postman, a widow, a farmer, a young woman, and a middle-aged herbalist/bootlegger? Was it caused by the food? Years of malnutrition and the joy of sticking it to the Germans? A longing to fill their mouths and minds with a commemorative feast of better days? No. Character Dawsey Adams knew just what it was.

“We were all hungry,” he said, “but it was Elizabeth who realized our true starvation . . . for connection, the company of other people, for fellowship.”

My husband, watching along with me this time, must have known it, too, because without missing a beat, he said:

“That’s exactly what our church needs.”

Wait, what? My church needs a home-cooked ham dinner? A good old-fashioned Minnesota hot-dish potluck? Well, maybe, but here’s what I actually mean: experiencing God’s good gifts in the company of His family draws us from simple, self-serving banality toward deep, Spirit-oriented joy.

Next month for work I have to travel to New Orleans, a place I’ve never been. I love to travel and was disappointed to learn that my husband’s schedule wouldn’t allow him to come with me, but I thought, Eh, I’m an introvert. I like being alone. Four days to myself in a new place sounds pretty good. To my surprise, though, the more I thought about it, the more I realized that I wanted to share the joy and excitement of being in a new place with another person. So, I invited my mom to come along. I wanted an experience that could be shared and remembered—one that would have meaning beyond the souvenir coffee cup I will undoubtedly bring home.

Perhaps you also find yourself surprised at the depth of your desire to share experiences with others. Guess who’s not surprised? God. He built you this way.

The very origins of humanity—as related in Genesis 1, when God speaks all that is into existence—are an exercise in community built by a communal Godhead. The narrative says, “Let there be light . . . Let there be an expanse . . . Let the waters . . . Let the earth . . .” and so on and so forth. Until suddenly, verse 26: “Then God said, ‘Let us make man in our image, after our likeness’” (emphasis added).

The God of Creation—three in one, one in three—spoke into existence a race that would forever long for the community embedded in its Creator. Yes! The Triune God, the very first community, was present and active in the creation of the first man, and inasmuch as we are of Adam, the Trinity had an active role in creating each of us.

Later, the two Marys (Mary Magdalene and “the other Mary”), fresh from the shock of seeing an angel and finding out that their Master and Friend had risen, “departed quickly from the tomb with fear and great joy, and ran to tell his disciples” (Matt. 28:8).

Can you feel their hearts pounding, their throats bursting as they sprinted down the path, not knowing they were about to encounter Jesus Himself? Have you felt the elation of wonderful news that threatens to erupt from your very being if it is not shared with another believer who might praise the Lord beside you?

Or, like the disciples, have you travelled a journey that was treacherous and dark but not lonely? Have you walked the path of suffering with a faithful few who, though not perfectly, cared so deeply for one another that losing even one person to discouragement or abandon was not an option?

If you can’t, if you haven’t, are you ready to admit that though you’re hungry for a Christian experience, your true starvation is for Christian community?

Across the spectrum of humanity, we generally recognize there are certain events that are not designed to happen alone. Birth. Death. Marriage. We celebrate and memorialize together our shared past, our shared present, and, for those who believe, a shared future.

In the Church, though different groups see the spiritual implications of baptism and communion differently, as far as I’m aware, no group advocates doing those two things completely alone. You cannot commune by yourself. You can’t throw yourself in a river and call it good. Both are acts of submission; both are meant to be done in community. Jesus could have modeled His Supper for the disciples one at a time. Instead, He gathered His brothers around the Passover meal. He knew then what we know now: though our spiritual malnutrition has been fully, completely eradicated by His work on the cross, we will starve without our brothers and sisters to remind us to feast on His Word and to keep walking the path when darkness comes.

As I recall the scene of that humble kitchen in Guernsey, I think of the delight on the face of each one gathered around the table. Each from different walks of life, ages, occupations, and social classes, all of them leaning in to savor the aroma of that which they have longed for, with the hope that the day will come when their past longing becomes their present reality.

Friends—churched, unchurched, church-shoppers, and church-wishers—we Christians are hungry for many things: programs, perfect theology, charisma, nursery care at every service, moms groups, playgroups, conferences . . . and, hey, could we get a coffee bar? But when it comes down to it, what are we starving for? We long for Christ, His Word, and a community in which we can savor them, now and forever. And as we gather around His table, those around us will be drawn in.

What Weight Watchers Taught Me About Church