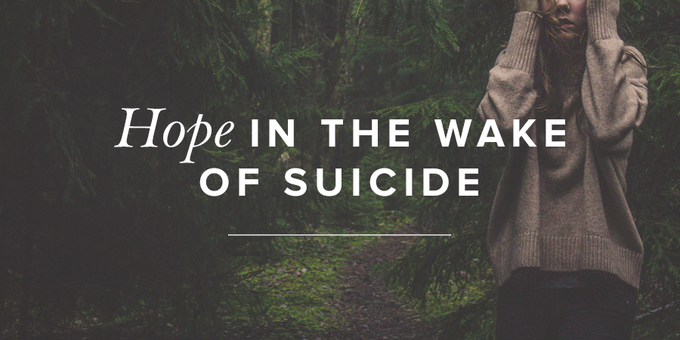 Hope in the Wake of Suicide

The suicides of Kate Spade and Anthony Bourdain this summer spurred a resurgence of discussion and examination of all that surrounds suicide. But in my hometown, that focus has dominated most of the past year.

In the course of about six months, there were six suicides by students and a graduate from the school district my husband and I attended. Plus there were six additional suicides by students in surrounding school districts. This horrific phenomenon is regarded as a suicide contagion—an outbreak of suicide in a group or community that has been exposed either directly or indirectly to a suicide.

As I heard about the tragedies, I was overcome with sorrow for the family and friends of those who died. With a suicide in our extended family just a few years ago, we’ve personally seen the agonizing effects of someone who ends their own life. Throughout those months, I heard about all kinds of reactions and read many responses on social media from those somehow connected to the tragedies. Sorrow, fear, despair, anger, and confusion peppered their words. All manner of possible reasons were offered for the suicides, and many action steps were proposed and taken in response.

I was overwhelmed by the combination of it all, so much so that for a while my main response was simply to pray. I prayed for the grieving families, for the friends left confused and heartbroken, for the teachers and administrators in the schools. I thanked God as I learned of many positive responses in the community. For a local church that opened its doors to host an information night with mental health professionals, doctors, and community service organizations. For friends who offered practical help to the community and for those who shared vital medical information. For a high school friend who invited people to meet to pray with her on the campus of each high school in the county throughout the course of several weeks.

My responses were more individual and private. I wasn’t directly connected with the deaths and no longer live in that area. I’m not a mental health professional. And I have a sincere desire to respect the tenderness of families, including my own, who have experienced suicide, particularly that of a child or sibling.

But I cannot deny a prompting in my gut—an urging of the Holy Spirit—to respond more publicly now that I have thought and prayed on these things for many months. I offer my thoughts humbly, as one who cares deeply about the gravity of suicide and its far-reaching effects, and hope that something I share may help to bring some comfort, clarity, and hope.

The Many Reasons for Suicide

Without a doubt, there are many contributing factors to suicide. Mental health disorders, physical abuse, substance abuse, emotional trauma, and exposure to violence just begin the list. Add in cultural influences like social media and entertainment that expose and even promote suicidal tendencies and the mind begins to boggle. There are also many kinds of necessary responses to suicide—particularly to a suicide contagion—including the mental, physical, emotional, and spiritual aspects of life.

As I’ve considered these contributing factors and possible responses, I’ve also thought of many questions regarding worldview. What lens were those who died looking through at their life and the world around them? Did they know some basic truths about themselves and the world? Were they dazed by the onslaught of information and options that fill our culture?

As I contemplated these questions, I kept coming back to three areas often overlooked that if left unconsidered or unanswered may lead to someone taking their own life: the existence of God, His plan and purpose for the world, and the hope for eternity He offers.

Now let me say from the start that I’m certain there are many people who commited suicide that believed in God, knew about His plan and purpose for the world, and knew of the hope He offers for eternity. I am also certain that there are some who may have had such a painful or damaging experience with religion or things surrounding God that it added to their despair. But for many others, perhaps these things were never considered or simply rejected. So for those at risk for suicide, those wading through the effects of suicide, and really for every person, it’s essential to think about these things.

The Existence of God

Do you have to believe God is real to value life or live purposely? No. But the acceptance of God as real—that He is an intentional, sovereign, loving Creator—is a strong foundation for personal worth and purpose. Acknowledging the evidence of God’s existence in both the natural world and in humanity lays the groundwork for so much.

When someone recognizes the order and complexity of the earth and all that is in it, he or she is recognizing evidence of a Creator God. And if there is a Creator God, then humans are made intentionally and given worth through the imprint of that Creator (Gen. 1). God made us in His image with valid needs and a plan to satisfy them fully. Having belief in a God who intentionally created you, values you greatly, and has a plan for you can shape the way you view the world and yourself.

God’s Plan and Purpose for the World

With God, His plan and purpose revealed to us through the Bible can guide our lives. Without God, people are left to define life and the world around them on their own. Figuring out life, exploring a world full of options, and defining your own truth may sound like freedom to some. But to others, those are heavy weights—extreme pressure masquerading as freedom.

This is something that I have pondered over and over throughout the suicide contagion in my hometown. Those that died through suicide were mostly teenagers, who, among other possible contributing factors, were probably trying to figure out their worth and purpose. Without a sure guide and some core truth to cling to, those things can be wildly overwhelming.

It’s likely that some may have been crushed under the weight of striving to find worth, value, and purpose within themselves. It’s likely that some were overcome by the onslaught of possibilities and mass of conflicting opinions and information in the world around them. In the midst of that combination of abundant options without a guide or standards to sort through it all, life may have seemed pointless and impossible to figure out, so death was a perceived welcome end to all of that confusion.

There is another way. We’re offered a way to experience freedom as we follow the standards and patterns of life found in the Bible. Self-reliance, personal rights, and individual expressions are held high in our culture, and authority is most often seen as restrictive to those things. But consider that a loving and sovereign God giving you a plan and pattern for life is not restrictive but empowering.

By living out God’s standards and following Christ’s example in all the distinct and diverse ways in each individual believer’s life, we have a purposeful way to move through both joyous and difficult circumstances. Sin still happens. Suffering will still come. But walking according to God’s ways toward His purposes—to bring Him glory and put His love and truth on display—is a purpose like no other.

The Hope of Eternity

Eternity is something none of us can fully grasp and something many people don’t even consider. But eternity—an always-has-been, is, and never-ending view of time—is what is described in the Bible. God provides a way through Christ and belief in Him to spend eternity with Him.

As we see our need for a Savior and believe Christ’s death was payment for our sins and His resurrection was triumph over sin and death, we receive forgiveness for sins and the promise of eternal life with Him (Eph. 1:7–10). Those who don’t respond to the Truth of God will experience eternity separated from God. Eternity with God gives us hope in the midst of difficult and painful circumstances here on earth. It keeps us from thinking life is futile because it means there is more to come. Eternity with God as the ultimate goal gives me a reason to persevere.

So as we rightly consider mental health, life circumstances, and the other necessary issues that contribute to suicide, let us also consider these three points. Seeking to understand the mental, emotional, physical, and spiritual aspects of life is necessary to live with purpose. We should take steps to consider these things whether for ourselves or those we know.

As you ponder and learn, talk with the people in your life. Your family members—especially children. Neighbors. Coworkers. Friends. There is hope in the wake of suicide. Hope to prevent it and hope to live after it touches your life. There is knowledge to gain, truth to share, care to display, and love to give.

Therefore, knowing the fear of the Lord, we persuade others. But what we are is known to God, and I hope it is known also to your conscience. We are not commending ourselves to you again but giving you cause to boast about us, so that you may be able to answer those who boast about outward appearance and not about what is in the heart. For if we are beside ourselves, it is for God; if we are in our right mind, it is for you. For the love of Christ controls us, because we have concluded this: that one has died for all, therefore all have died; and he died for all, that those who live might no longer live for themselves but for him who for their sake died and was raised (2 Cor. 5:11–15).