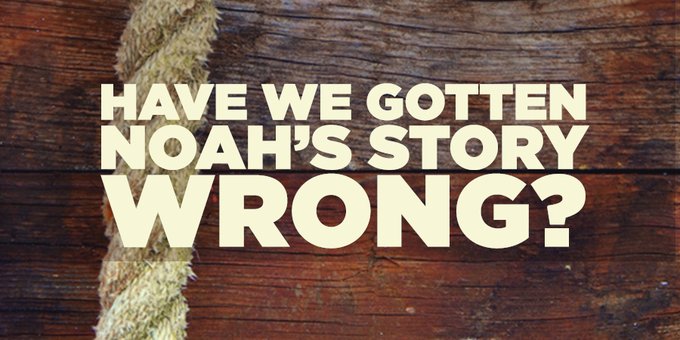 Have We Gotten Noah's Story Wrong?

Things got a bit lively in our little Sunday school class recently. Our fearless leader initiated a conversation about grace by reading Genesis 6:5–9:

“Then the LORD saw that the wickedness of man was great in the earth, and that every intention of the thoughts of his heart was only evil continually. And the LORD was sorry that he had made man on the earth, and it grieved him to his heart. So the LORD said, “I will blot out man whom I have created from the face of the land . . . But Noah found favor in the eyes of the LORD . . . Noah was a righteous man, blameless in his generation. Noah walked with God.” (emphasis added)

Familiar story most of us learned from childhood, right? Even my two-year-old grandbaby knows the gray-haired man by the big boat in the picture book is Noah! As we grow older we learn the specifics of Noah’s life: He found favor (grace) in the eyes of the Lord because he was a righteous, blameless man who walked with God. The result of Noah’s righteousness? God spared him and his family when He destroyed the world with a flood. That’s what the Scriptures say . . . right?

Or is it? Was it really Noah’s righteousness that merited God’s grace? Did God extend grace to Noah and his family because Noah was righteous and walked with God?

I wonder how you would answer those questions. I guess I’ve always thought Noah was a really good guy living in a generation when everyone else was really, really bad. But last week in Sunday school something just didn’t seem right. The focus of our discussion became Noah and his righteousness rather than God’s grace. I left wondering, “Is the take-away from this lesson that we need to be more like Noah?”

The angst in my soul continued to grow. How did Noah’s righteousness relate to God’s grace? And what about the gospel? Why is Jesus even necessary if Noah’s own righteousness is what earned God’s favor?

The lively discussion has continued in our home this week—and beyond. I can’t wait to share some of what we’re discovering. But before I do, I’d love to have you weigh in on our discussion about Noah and grace. How would you answer the questions we’re considering about Noah, grace, and righteousness?