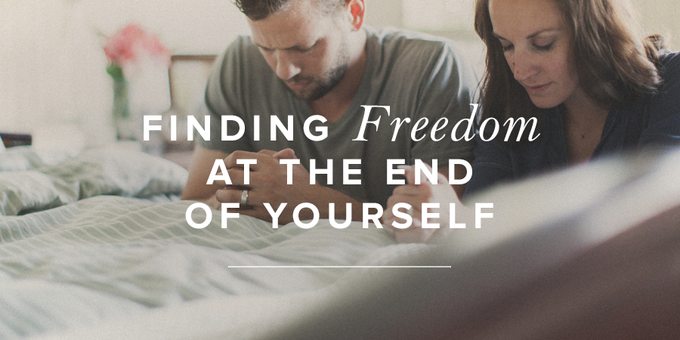 God has used marriage and motherhood to bring me to the end of myself. In my single years, I took pride in my emotional stability, my innate strength, my independence, and even my lack of felt need for a man. I didn’t even think I was too bad in the godliness department.

Yet it wasn’t long after embarking on the ship to motherhood-land that I realized how impatient and angry I could be. And five years into my marriage, I was struck by a blow I was always afraid to face. Both of these instances drove me to my knees in desperation.

The last seven years of marriage and motherhood have bitten chunks out of my usual stable emotions, showed me how weak I actually am, killed my independence, and helped me feel needy for one particular man: the sinless Savior who died for me.

Our Cultural Lack of Neediness

When I skim through social media outlets, expressions of neediness are not the typical share. Instead, what I see from many women is self-affirmation. Women are trying to cling to this idea that we’re strong enough and good enough as a way to combat the lies from others and ourselves.

Svend Brinkmann, a Danish psychology professor and leader of the anti-self-help movement, explains how the success of the self-help industry reveals the anxiety and instability of modern life. He says:

Professor Brinkmann argues that this constant inward turning is making us more unhappy:

So many studies have shown that meaning is found in our relationships, with others, with the world, with society, with nature—with something beyond ourselves.

What if our affirmation didn’t need to come from us but came from a higher source? A source unflinching in its stability. A source, as Professor Brickman says, that is “beyond ourselves.”

Many women today find their source of encouragement and freedom from positive self-help thinking. But what if telling ourselves that we’re strong enough isn’t enough? We’d rather believe we have it all together than believe we have a Savior who holds everything together for us.

We’d rather heap heavy loads on ourselves than look to the One who carries all our burdens (Matt. 11:28–29). We’d rather think we’re good enough and can handle things on our own, instead of running to the throne of grace in time of need (Heb. 4:16). We are full of ourselves, when God desires us to come to the end of ourselves. He bids us to come and die so we can rise with Him in the resurrection power He provides.

An Unlikely Source of Freedom

At one point, I felt like I had nothing left inside me to offer my husband. I felt empty and bereft of love because I was so hurt. I cried out to God and asked Him to help me love my husband in a way that I knew I couldn’t naturally. God answered my prayer and slowly filled me with a supernatural love from Him—a love that runs deeper and truer than any earthly romance. Realizing my neediness freed me to love in a deeper, Christ-like way.

The times where God has brought me to the end of myself in marriage and motherhood are the worst and best times. Like the death of Christ on the cross, the best and the worst collided. There was pain, there was suffering, and ultimately, there was death. But it was the most beautiful thing to ever happen in our world.

In the hands of a loving Father, coming to the end of ourselves is a beautiful thing leading us to more life in Him. Coming to the end of ourselves means walking the road of humility that God has laid out before us. It’s the same road that our Savior walked ahead of us. We’re called to tread the road where Jesus humbled Himself to the point of death (Phil. 2:8). It doesn’t feel good and it’s difficult, but on the other side is freedom and life.

A Better Word of Affirmation

I was brought to the end of myself through marital hardship. God used this suffering in my life to show me that I’m not strong enough to withstand everything on my own. He brought me to a place of desperation where I could see myself truly in light of who God is and cry out to Him for strength and grace.

As Sheldon Vanauken puts it, it was a “severe mercy.” Coming to the end of myself has forever changed me. It’s freed me to embrace who I am: a frail and sinful human in need of grace. Walking the road of humility that Christ paved for me leads me to the One who intercedes on my behalf and pleads my cause to the Father. His blood speaks a better word for me (Heb. 12:24)—a word of eternally positive affirmation. All I have to do is admit I’m not good enough or strong enough on my own, and I need Him desperately.

Have You Brought Your Brokenness to God?