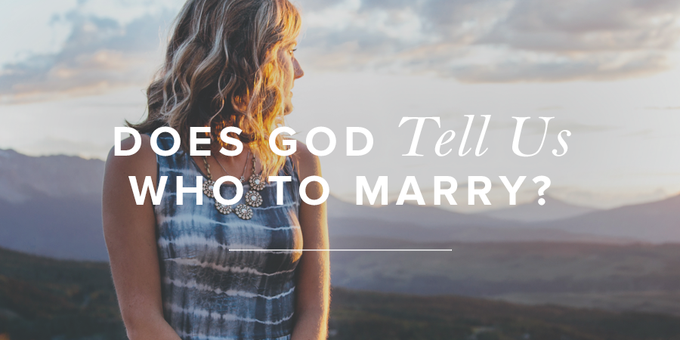 Does God Tell Us Who to Marry?

Let me just put it out there: I don’t believe God reveals to us specifically whom we’re going to marry beforehand. (I’m not saying God doesn’t provide for or direct us, just that you won’t hear a “Marry Joe” directive from God.)

I understand you might be convinced that God did share this with you, but would you be willing to consider—at least long enough to read this article—that the “voice” or nudge you heard or felt wasn’t from God? That maybe you were off in how you interpreted His voice or your circumstances? Here’s why I want to challenge you:

Here’s what I believe you do have right: God speaks. Thankfully for us, He wants us to know Him! Hebrews 1:1–2 is clear:

Long ago, at many times and in many ways, God spoke to our fathers by the prophets, but in these last days he has spoken to us by his Son, whom he appointed the heir of all things, through whom also he created the world.

The point of Hebrews 1 is to show the supremacy of Christ. God used to speak through the prophets, but now He has done something even better. He has spoken to us by sending His Son to us! While Hebrews 1 is all about Jesus, I think we can learn from these first two verses about how God has spoken and still speaks today.

In Hebrews 1, we see that God spoke in two phases: long ago, by the prophets, and now, in these last days, by His Son.

Let me state the obvious: You and I are not prophets, and we’re definitely not God’s Son. In the Old Testament, you’ll find writings from seventeen prophets: Moses, Isaiah, Jeremiah, Ezekiel, Daniel, Hosea, Joel, Amos, Obadiah, Jonah, Micah, Nahum, Habakkuk, Zephaniah, Haggai, Zechariah, and Malachi. In the scope of history, very few were actually called as prophets.

Before God sent His Son to earth, He tended to choose one major prophet at a time to speak on His behalf to His people. Let’s take Jeremiah, for example. God didn’t primarily tell Jeremiah what to expect in his own life. God primarily told him to tell the people that they were not to resist Babylon’s captivity. They were not to try to find safety in the arms of Egypt. Captivity was God’s punishment to them for not heeding His covenant. They were to accept it.

Who God Did Tell to Marry

I can think of two times in the whole Bible God did tell someone whom to marry: Hosea and Joseph. (If you’re wondering about Isaac, his servant prayed for wisdom and God gave it. God didn’t direct him through an audible voice, saying, “That’s the one!”)

In Hosea 1:2, God commanded the prophet Hosea, “Go, take to yourself a wife of whoredom and have children of whoredom.” This was not for Hosea’s sake, though. And it’s definitely not the norm: God tells us to pursue marriage with those who share our faith and walk in holiness (2 Cor. 6:14).

God told Hosea to marry this prostitute as a visual lesson for all of God’s people. God gives the reason for this marriage: “Go, take to yourself a wife of whoredom and have children of whoredom, for the land commits great whoredom by forsaking the LORD.” Hosea’s marriage was a powerful picture of God’s pursuit of His wayward people.

The second example is found in the New Testament, when an angel of God told Joseph not to be afraid to take Mary as his wife (Matt. 1:20–21). Was this merely for Joseph’s comfort and pleasure? Hardly. God was intent on fulfilling His redemptive purposes. The fullness of time had come. Joseph needed to marry the Virgin Mary so that centuries of prophecy might be fulfilled and God’s redemptive plan could come to pass.

When we assume that God is speaking to us individually, apart from His Word that is applied by His Spirit, we elevate ourselves to the status of a prophet. When we call our own thoughts God’s words, we are thinking too highly of ourselves and not nearly highly enough of God.

Every time I begin to complain that God is silent and that I need God to speak to me, at that moment I should stop and ask: Have I heard this word? Is this word from God—spoken in the Son of God—so short and simple that I have finished with it, and now I need more—another word? Have I really heard the word of God in the person and the teaching and the work of the Son? Is the aching of my soul and the confusion of my mind really owing to the fact that I have exhausted hearing this word and need another word? And so I feel another gracious rebuke to my unperceptive and presumptuous ears.

What does this mean in regard to marriage? God gives us great freedom in choosing whom we’ll marry. So marvel at the fact that God has spoken to us through sending His beloved Son, accept that word as enough for you, and then wisely choose whom you will marry.

A version of this post originally appeared at DesiringGod.org.

How Can I Know God's Will for My Life?