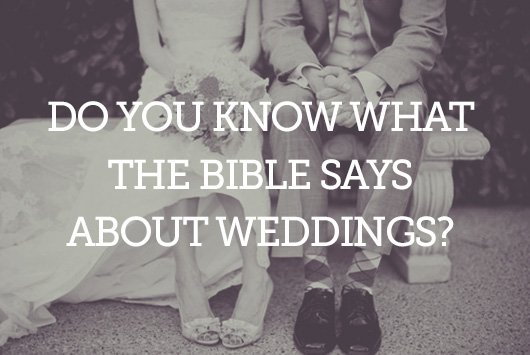 Do You Know What the Bible Says About Weddings?

If someone asked you what the Bible says about weddings, what would you say? The truth is, at first glance there's not much there. But when I was writing A Christ-Centered Wedding (co-written with my mom, Linda Strode), I researched ancient Jewish wedding customs. I wanted to understand why weddings today are the way they are, and what they were like in biblical times. So I did some digging around, and I was amazed by what I found.

No matter how you've been treated by men here in earthly relationships, there is a Groom who will never leave you nor forsake you.

When we read the Bible, we do not actually see many obvious references to weddings. We know God brought Eve to Adam and she was called his wife. We see various mentions of "bride" and "bridegroom" and understand the bride would wait for her groom to come for her. We see a great feast in John 2 at the wedding at Cana, and Jesus refers to weddings in some of His parables.

Because we lack the understanding of an ancient Jewish audience, we miss out on some beautiful aspects of the wedding metaphor in the New Testament. In various places in the Old Testament, Israel is referred to as God's bride. But in the New Testament, we see a fuller picture of this as the Church (those who trust Christ for salvation) is seen as the bride of Christ. But it's not just in obvious references, such as Revelation 19. We also see reflections of wedding imagery in the New Testament in these ways:

Oh, How He Loves Us!

As I studied these passages and became aware of the wedding imagery in the New Testament, my understanding of Jesus Christ's love for me was deepened. I was led to worship from my kitchen table, writing of the beauty and immense privilege of being the bride of Christ! How incredible is the Father's mercy, to take a sinful woman like me and clothe me in His Son's righteousness—to call me the blood-bought bride of the Lamb?

Send Out the Invitations

This newfound knowledge also spurred me on to invite others to this marriage feast. This is not an exclusive relationship—whoever trusts in Christ alone through grace alone will one day come together as the bride of Christ. So I want to share this amazing love with others.

No matter how you've been treated by men here in earthly relationships, there is a Groom who will never leave you nor forsake you. He knows you intimately, and isn't disgusted by you. May this truth encourage all of our hearts today, and may it power our efforts to proclaim His love to the nations!

How does the Bible's reference to believers as the "bride" of Jesus Christ encourage you to believe the depths of His love for you?

Previous Post The Church Is a Body, Not a Body Part
Next Post When We (kind of) Believe in Karma

We Went to Church on Our Honeymoon