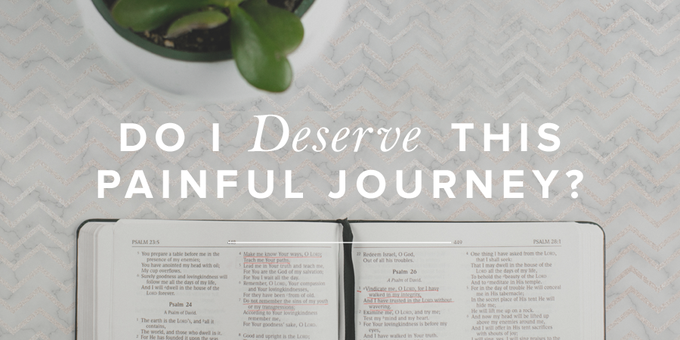 46% 46%
Give Today Give Today
From our team: Our friend, author, and longtime True Woman blogger, Kimberly Wagner, has been walking through a difficult season. Her husband, LeRoy, is suffering from a debilitating neurological disease. (If you’d like to share in their medical costs, you can give here.) The grace of God radiates through them as they suffer well. Listen in as she shares what she’s learning.

Facebook is an interesting community where we’re assaulted with all kinds of opinions, arguments, and uncomfortable gossip (that’s why I don’t spend much time there; you’ll find me more often on Instagram). But when I do drop in to post occasional updates or links to blog posts, invariably I’ll get a few responses that are well intended, I’m sure, but nonetheless are comments that are untrue. As I’ve posted updates on LeRoy’s destructive illness and paralysis, I’ve received these kinds of comments:

“Your husband doesn’t deserve this!”
“God didn’t do this to him; this is the work of the devil!”
“God doesn’t bring illness . . .”

All of these statements are well meaning and may have a small grain of truth to them. . . . God does not produce evil actions or tempt us with evil (James 1:13) and every gift from God is good (James 1:17). But yes, I must argue, God does bring affliction—and as hard as that truth may be to swallow, affliction sent from Him is one of His good gifts.

If we claim to live under Scripture’s authority, we can’t deny or escape this truth:

I know, O LORD, that your rules are righteous, and that in faithfulness you have afflicted me (Ps. 119:75).

Who “afflicted” the Psalmist here? Who did that “in faithfulness”?

Let’s take a quick run through Scripture and consider God’s role in afflicting those He loves.

This young man appeared to be a pretty righteous dude. He had strong moral convictions and stuck to them even when it would’ve been easier to give in. From what we see of him in Scripture, there are no glaring sins, other than perhaps enough foolish pride to let his brothers know about his self-exalting dream life (Gen. 37:5–11).

But God had a plan for this young man. And an integral part of that plan included sending Joseph into a long season of affliction. Obviously, God had good purpose in doing that.

Psalm 105 records a bit of what God was doing with Joseph. Verse 16 begins with a poetic description of God “calling” for a famine on the land of Egypt. Here we see that Joseph’s life was woven into God’s plan for His people and even the rulers of Egypt:

When he summoned a famine on the land and broke all supply of bread, he had sent a man ahead of them, Joseph, who was sold as a slave. His feet were hurt with fetters; his neck was put in a collar of iron; until what he had said came to pass, the word of the LORD tested him.

The king sent and released him; the ruler of the peoples set him free; he made him lord of his house and ruler of all his possessions, to bind his princes at his pleasure and to teach his elders wisdom (vv. 16–22).

That first line says that God “summoned” a famine on the land of Egypt. God did that. Famines are not pleasant nor comfortable, but God brought that famine.

Evil does not originate or flow from God, but God can employ evil, and He can even use evil to defeat evil itself.

God used the evil deeds of Joseph’s brothers to send him into Egypt, and their actions were used by God to take Joseph into Egypt. The famine, Joseph’s affliction and sorrow, the loss Jacob endured . . . all of these were God’s good gifts brought by God for His good purposes.

Yes, these afflictions were good gifts.

And what about the affliction Job endured?

Did Job bring about his own suffering because of his sin? Was he being punished for some horrific moral failure? No.

God is the one who initiated Job’s suffering when he asked Satan, “Have you considered my servant Job?” (1:8). God praised Job as a man who is “blameless and upright . . . who fears God and turns away from evil” (v. 8). When Satan challenged God’s assessment of Job with the accusation that Job only serves God for the good blessings He heaps on him, God responded with the confidence of a Father who knows His child’s loyalty.

It’s understandable that we all want to fit suffering into that little box, that pagan system of karma that explains illness or tragedy as a result of some wicked or sinful past.

Job’s struggle, and what he voiced in his perplexed state, actually affirms that his understanding of God (at that time) was framed by a logical, but limited, worldview. Job honored God; chapter one clearly affirms that. But his limited perspective was based on the idea that because God is good (and also all powerful), He will not bring affliction to those He loves.

I think a lot of us live with that perspective, it seems to make sense, especially if we lived in a cross-less world.

But that’s where the rub comes.

God graciously chose Job (yes, I said graciously) to experience a level of pain and suffering that few are invited to walk. This extended season of intense affliction wasn’t meant to destroy Job, but it allowed him to enter into a greater understanding of God and also allowed his journey to display God’s worth (for thousands of years!).

Job’s story flies in the face of the health, wealth, and prosperity gospel.

When a godly man suffers, it doesn’t make sense in our system of right and wrong.

(And yet it does, when you think of the cross.)

“Why Should I Be Exempt”?

LeRoy counters that way of thinking with this question, “Jesus suffered for me. Why should I be exempt from suffering?”

We’ve been warned by our Savior (who suffered more than we ever will) that we would endure difficulty during our time here on earth:

“I have said these things to you, that in me you may have peace. In the world you will have tribulation. But take heart; I have overcome the world” (John 16:33).

And the book of Romans reminds us that all of creation is groaning under the curse as a result of the Fall. So as long as the conditions of the Fall are in effect, we’re all susceptible to the painful experiences and consequences of living in a fallen world. And that, too, is under God’s rule and controlled by His hand.

Yes, Jesus brings redemption, healing, and life . . . but He also sends us into storms of suffering that He might be glorified through our response and faith in the storm. He sends us into the fire that we might be refined in the furnace of affliction. He appoints affliction for us that He might accomplish His plan that goes far beyond our small existence.

Who is to say why God has chosen this journey for us at this time?

We Don’t See the Whole Picture

From outward appearance, it would seem a waste, an injustice, a contradiction. But we serve a mysterious God who is known to use the most unexpected means to bring about a miraculous and glorious end result. Would Joni Eareckson Tada have brought as much glory to God outside of her wheelchair?

We aren’t the ones who can determine that.

As we face suffering (and everyone in this fallen world does), and we walk through the path of affliction with a heart that remains devoted to God, it gives the lost world a glimpse into God’s value. They get the message that no matter what happens to us, this incredible God is worthy of our worship—no matter what!

And we know from James 1 that suffering is a means that God uses to mature us. We all need that. I definitely need that!

Joseph didn’t understand why he was given dreams of glory and ended up abandoned in a prison cell. Job didn’t know the dialogue between Satan and God and couldn’t see the story God was writing in his life. Yet what amazing stories both of these became! You and I don’t see the scope and expanse of our stories, either.

God never ceases to amaze me. He is faithful; He is good; He is omnipotent. But He does not always work in ways that are easy to understand.

He is incredible in His ability to take the worst points of suffering and bring redemption and even a greater knowing of His heart.

All I know is that our God is all wise, and He Himself suffered to secure us freedom from eternal suffering.

And this is the truth that’s truly hard to swallow. He is good. He is all powerful. And He appoints suffering. His suffering brought about my rescue; His pain accomplished my freedom. That truth is hard to conceive.

He appoints suffering, yes, painful journeys. And in doing that, He is still good.

Perhaps someone who is blinded by the deception of the evil one will watch you when you are at a point of intense suffering and see your love and devotion to the Savior. And perhaps those who are condemned and observe your faith in Christ through your affliction will have their eyes opened to the wonder and value of this Savior that you follow unwaveringly—and will respond to His great love.

This is our hope and prayer, that God will use our suffering and your current or future suffering to showcase the fact that He is good and worthy of our worship.

Will you join us in asking God to accomplish that?

Let Suffering Drive You to the Cross