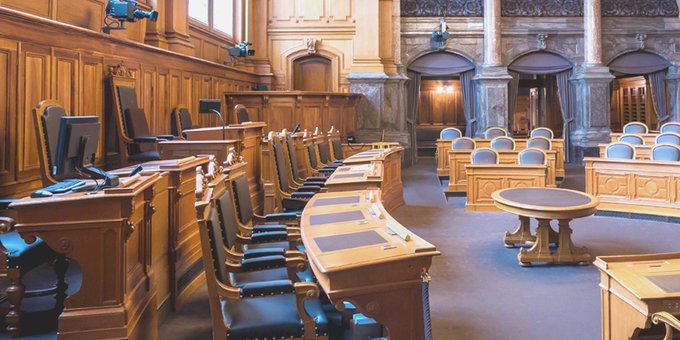 Though I enjoy legal fiction in all its forms—books, movies, television—I have only set foot in an actual courtroom on one occasion: jury duty. Not surprisingly, the courtroom bore little resemblance to Hollywood depictions. I sat in the gallery, observing the voir dire proceedings with waning interest, wondering if pregnancy would be an acceptable excuse to give the judge if my number got called. Thankfully, I never had to find out. I walked out of the courtroom a couple hours later with no plans to return.

However, I often reenter another type of courtroom.

This court resides in my imagination, and within its walls I’m no mere observer of the proceedings. I’m the defendant. The judge and jury are my unbridled thoughts. The evidence against me? Anything my flesh can find to accuse me, whether a word, thought, action, or motive. Most often the gavel slams down pronouncing me guilty as charged.

Perhaps you’re familiar with this courtroom as well. It’s the court of opinions, both those of others and myself. It’s filled with doubt, self-analysis, and shame.

But we have hope.

That court is adjourned. We can (and must!) walk out the door.

The Court of Others’ Opinions

Paul, facing criticism from the church he planted in Corinth, tells these immature believers that he refuses to be judged by them. If they want to criticize him, that’s their business; but he won’t let it upset him.

Before we go any farther, we need to hit the brakes to consider what Paul doesn’t mean.

Exiting the courtroom of others’ opinions does not mean that we don’t need accountability. Paul does not give his readers permission to do whatever they want and to scoff at anyone who would dare confront them about their sin. In many places throughout his epistles, Paul endorses accountability and shuns licentious living.

Clearly, Paul does not mean that he doesn’t need anyone to tell him anything and that he can do whatever he wants with impunity. Paul instead recognizes that he is not on trial by others’ opinions. He will stand before one Judge, and it is His opinion that matters and no one else’s.

The Corinthians likely had criticized Paul’s delivery methods, but the apostle says that he was concerned with one thing and one thing only: preaching Jesus Christ and Him crucified (1 Cor. 2:1–2). He intentionally came without the bells and whistles of a slick speaker so that his hearers would know that the message had power, not the messenger (1 Cor. 2:4–5). Paul does not claim to have ministered perfectly to the Corinthians, but he did minister to them faithfully. Therefore, it doesn’t matter what they say about him. He knows that he did what the true Judge asked of him.

What about you and me?

I am often indicted by others’ opinions—even if those opinions are only in my head. I imagine criticism voiced through silence or assume a whispered word was about me. Likewise, I vividly remember actual disapproval levied against me, whether warranted or not. I spend far too much mental bandwidth rehashing conversations and wondering what others think of me.

But the Holy Spirit, through the apostle Paul, tells me to vacate this courtroom.

The Courtroom of My Own Opinions

Perhaps even more dangerous than the court of others’ opinions is the court I hold with my own opinions of myself. But Paul speaks to this as well: “In fact, I don't even judge myself. For I am not conscious of anything against myself, but I am not justified by this” (1 Cor. 4:3–4).

Paul does not look back at his time in Corinth wringing his hands and wondering if he should have done things differently. Given the state of affairs in that church, self-doubt would come pretty naturally for most of us. But not Paul. He doesn’t wonder if he should have taught more on marriage and immorality. He doesn’t second-guess his delivery style or agonize over whether he left too soon. He doesn’t go there at all.

I wish it were so simple for me.

We hear a lot about negative and positive “self-talk.” The “experts” tell us that if we stop saying bad things about ourselves and start saying happy, positive things, our whole lives will change. One article claims that everything from vitality to immune response to general life satisfaction will improve.1

Certainly, we ought to avoid saying shame-filled, negative things to ourselves; however, the biblical answer is not to turn the negative into positive. The problem with self-talk, whether positive or negative, is that it’s self-centered. The last thing I need is more of myself.

Consider what Scripture says about where our minds ought to be:

My friends, humility does not look like deflating your own ego rather than inflating it. Though often mis-attributed to C. S. Lewis, whichever author originally said, “Humility is not thinking less of yourself; it’s thinking of yourself less” was right.

We need to walk out of the court of self-examination.

The Courtroom That Matters

We must exit the court of others’ opinions and even the opinions of ourselves and live in light of the one court that matters: “It is the Lord who judges me” (1 Cor. 4:4).

Paul makes himself subject to one Judge: the Lord Jesus Christ, the Judge of the living and the dead. In one sense, that judgment is yet to come (Rev. 20:11–15). However, in another sense, it has already taken place.

With three words, Christ adjourned the court: “It is finished” (John 19:30). With that final cry from the cross, our Savior paid the ransom and served our sentence in full, as He bore the eternal, infinite wrath of God against all sin for all time. Now, we can stand before Him justified (Rom. 5:1).

Justified is sometimes pithily defined as “just as if I’d never sinned.” That definition is true, but incomplete. If that were all justification meant, we would merely receive a “not guilty” verdict in the courtroom. That would be a wonder of God’s mercy, but we would not have the hope of heaven. The fuller definition of justified means that God not only sees me as not guilty; He actually views me as innocent. All the righteousness of Christ has been credited to my account.

Think of a debtor forgiven an unfathomable debt. To merely have a clean balance sheet would be worth dancing in the streets. But now imagine that same debtor being not only cleared of his deficit but also given a fortune beyond measure, a figure bigger than that which he owed.

And that is why Paul can offer this promise: “Therefore, there is now no condemnation for those in Christ Jesus” (Rom. 8:1).

And this one: “Who can bring an accusation against God's elect? God is the one who justifies” (Rom. 8:33).

Court is adjourned. There is no condemnation.

Not from God Himself.

If you identify with my struggle of constantly grappling with the voices of self-doubt and concern over what others are thinking, join me in walking out of that courtroom.

The verdict is already in. If you know Christ, you are justified; there is no condemnation. Keep your eyes on Him.2

2I cannot write this article without acknowledging that I have been heavily influenced on this topic by Tim Keller’s short book The Freedom of Self-Forgetfulness in which he takes a closer look at this passage, our broken egos, and the transformation of the gospel. The best thirty-two-page book you’ll ever read!

Previous Post Words Fail, God Does Not: Gospel Hope in Ukraine
Next Post How to Read the Bible without Missing the Point