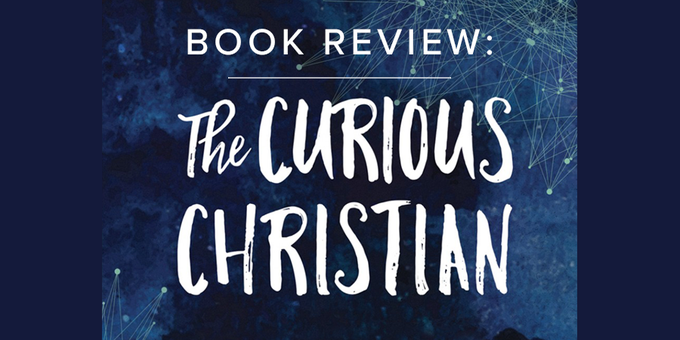 The Curious Christian. What kind of book title is that? If you’re anything like I am (and apparently like most people in the world), you aren’t by nature a very curious person. But when this book with its intriguing title came across my desk, I couldn’t help myself. I suddenly became extremely curious. I was just itching to know “how discovering wonder enriches every part of life,” as the subtitle states.

Author Barnabas Piper makes a curious and compelling case for why healthy skepticism and a thirst for knowledge is a good thing—perhaps even essential. Just as kids often bring “wonder and merriment and raw enthusiasm” to “otherwise mundane experiences,” curiosity sparks within an adult a childlike search for new discoveries and pleasures. I appreciate that Piper differentiates between childlikeness and childishness and doesn’t excuse a lack of maturity or responsibility in a person for the sake of curiosity.

According to Piper, most people are of the incurious nature, content to stick to their same routines in the same rut without much thought as to whether there’s a better or alternate way to do or view things. “While curiosity is in us from birth,” he says, “it is not just a trait. . . . Curiosity is a discipline, a habit, a skill set.”

That came as a surprise to me. I always thought being a deep thinker or asking good questions just came naturally for some and not for others. I never considered the possibility that it could be a skill I could acquire. Ah, but that’s because I’ve neglected to feed my own curiosity. And until now, I never thought about how narrow-minded and self-centered that kind of disinterested approach to life truly is.

Not being a curious Christian doesn’t simply mean we miss out on exploring the wonder and intricacy of life and creation; it means we miss out on the greater joy found in knowing our Father at a deeper level and of investing in meaningful, lasting friendships with His image-bearers.

Why are so many of us not more curious than we are? Is it simply that we’ve outgrown the imagination and inquisitive nature we had as a child? Piper thinks there’s more to it than that. Our society, particularly in the western world, is one that “value[s] knowledge based on what it will enable us to do.” And by do, he means earn. Rather than encouraging students to discover and develop their skills and interests, we push them to major in business or science or something that has a greater return. This, he argues, is not the value system Christians should hold to.

Of course, there are potential dangers from being too curious, from taking curiosity to an extreme. In opening your mind to new thoughts or ideas or places, your curiosity should never become an excuse for sinning or giving into temptation. You should never let it lead you away from the truth or to compromise conviction. The whole purpose of curiosity is to lead you to the truth and expand your knowledge of it, not the other way around.

Piper defines this kind of curiosity in this way:

Open-mindedness, at its best, is humility and grace blended with curiosity—but not without conviction. . . . It means really listening—listening for meaning and intent rather than just the chance to offer a counterpoint. And it means looking for truth in what one hears.

On the other end of the spectrum, we shouldn’t allow open-mindedness to become the cure-all for everything. Though Piper spends nine chapters praising and promoting this quality, he never once elevates it above the Word. “Without Scripture,” he clarifies, “all our other curiosity is at great risk of pursuing falsehood. Scripture is our plumbline, our compass.”

So don’t let all the foreign “curious” language trip you up. Curiosity is just another way of saying:

Piper concludes his book with practical suggestions on how to kickstart your curiosity. I would list some off for you, but I’d rather leave you curious to find out on your own.

The Window to Eternity

From the intriguing title to the final “how-to” chapter, The Curious Christian challenged me to open my mind, think outside the box, and ask questions about anything and everything. The most compelling reason for that is because one day soon I’ll embark on the journey of a lifetime (and forever after that) of asking and learning and tasting and sensing more of the God of all eternity and His wonderful new creation.

So why not begin now?

I love Piper’s final thought on curiosity as “the window to eternity”:

By pursuing godly curiosity in all of life, Christians bring bits of heaven to earth. And when our time comes to die, we will bring bits of this earth to heaven as well. Which bits? We will know for certain when we get there, but now is the time to start finding out.

Previous Post We Don’t Deserve the Mercy of Discipline
Next Post Together: Adorning the Gospel in Community