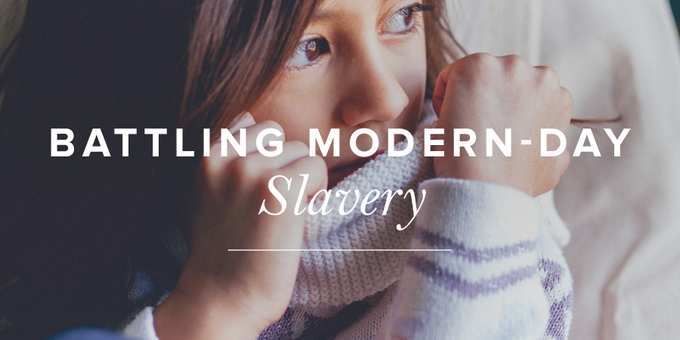 When we think of slavery, we often limit its scope to a horrific practice in the past. Subject closed. But we’re naive if we think slavery is a past-tense word. Slavery exists in our time and in our cities, and like the great justice seekers of the past, we must fight for justice for people being held against their will.

Human trafficking is modern-day slavery and involves the use of force, fraud, or coercion to obtain some type of labor or commercial sex act.

Modern-day slavery does exist—and not just on the other side of the world. We must open ourselves up to the reality of the global human trafficking crisis and wisely take action. Awareness, compassion, and engagement are three powerful ways that we can join the fight to end modern-day slavery.

First, we must heighten our awareness. While anyone can be susceptible to predators, orphans and children without support systems are most vulnerable to human traffickers because they don’t have family or caregivers to provide for and protect them. While people from anywhere can become victims of human trafficking, those from politically unstable, impoverished countries with little government protection for victims are most vulnerable.

Human trafficking is a multi-billion dollar industry. The Global Slavery Index estimates there are over forty-five million slaves in the world today. Slaves. Does that word make you uncomfortable? It should. How do people in this day and age become slaves?

Imagine a young boy living in the mountains of Nepal. He never knew his father, and his mother got sick and died. He works as a goat herder to survive. He goes to bed hungry each night; what little money he makes is never enough. A man approaches him at work one day, offering to bring him to the city and enroll him in school, paying for all his expenses. He desperately clings to the hope of being cared for and given the opportunity to rise out of poverty. The man does bring him to the city, but only to force him to work in a sweatshop for no wages. This young boy is now a slave. Open your eyes. Do you see him?

A teenage girl gets off the bus after school. She walks the short distance to her house where her older boyfriend is waiting. Her parents are divorced, and she lives with her mom who won’t be home for several hours. Her boyfriend makes her feel special, buys her presents, and says he loves her. He doesn’t. He is a pimp, and eventually he forces her to have sex with several men each day for money. She is now a slave. Open your eyes. Do you see her?

Dear reader, open your eyes. See what’s happening. See the vileness of people being exploited. See the evil. Don’t look away. We serve El Roi—the God who sees. As imitators of Christ, looking the other way is not an option for us. We must boldly confront the injustice that we see.

Once we’ve opened our eyes to the reality of human trafficking, we must ask ourselves, how should we respond? We look to Scripture for guidance and to Christ for our example.

We open our hearts with love for our God, who created all people in His image (Gen. 1:27). We love Him by valuing His creation. We value life because we believe that every person is created in the image of God. We honor God by valuing the vulnerable teenage girl who is desperate to be loved. We love her, fight for her, and point her to the One whose steadfast love is never ceasing (Lam. 3:22).

The young boy desperate to survive also bears the image of our God. We glorify Him by valuing this vulnerable boy. We protect him, advocate for him, and point him to the Father of the fatherless (Ps. 68:5).

We open our hearts with love for our God by obeying His Word. Jesus says in John 14:15, “If you love me, you will keep my commandments.” He commands us in Isaiah 1:17 to “seek justice, correct oppression.” If we love God, we will seek justice for the oppressed.

Open your heart. Reflect your Father’s heart for the vulnerable. He loves them. He sent His Son to die for them. He created them to bring Himself glory. And He commands us to seek justice for the oppressed. Our open hearts will result in obedient living.

Once we’ve opened our hearts to reflect our Father’s, we open our arms to embrace the vulnerable. Opening our arms to exploited image bearers requires action. As believers, we are to be doers of the Word (James 1:22).

How? We do justice (Mic. 6:8). It’s our responsibility to engage the global human trafficking problem. For most of us, we won’t be on the front lines breaking down doors to brothels and rescuing sex slaves. But that doesn’t render us powerless in the fight for justice.

Consider the following ways you can fight human trafficking:

Image bearers of a holy God were never meant to be bought and sold. Sin has distorted our view of the value of life.

We should see the image of God, though imperfectly represented, in all human life. We should imitate our Father’s heart for the vulnerable and represent the kingdom of heaven on earth. We should repent of our lack of response to the global human trafficking problem and resolve to do justice with open arms.

Dietrich Bonhoeffer said, "Silence in the face of evil is itself evil. God will not hold us guiltless. Not to speak is to speak. Not to act is to act." We must not be the generation that is silent and inactive in the face of evil. It’s time for the Church to rise up and fight for freedom for slaves of human trafficking.

Trafficking in the Shadow of the Super Bowl