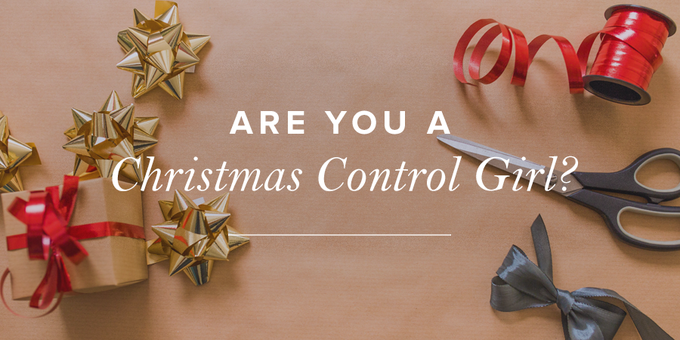 Are You a Christmas Control Girl?

Christmas often brings out the worst in me.

Every year, when I flip the calendar to December, I get caught up in making Christmas turn out “right.” It’s supposed to be the “most wonderful time of the year,” but knowing this only causes me to have heightened expectations about how everything should look and taste and be. Rather than visions of sugar plums, I have Pinterest pictures dancing in my head driving me to new ideals for decorating, gift-wrapping, and treat-making.

Without meaning to, I evolve into a “Christmas Control Girl” who makes my family think it’s anything but the “most wonderful time of the year.”

There is such irony in this, especially when I consider the first Christmas. For Mary, nothing was turning out “right”—at least not humanly speaking. But then Mary was human! She was a normal teenage girl with plans for her future and dreams of how everything should go. And just like the rest of us, Mary could have been a Control Girl.

In my upcoming book, Control Girl: Lessons on Surrendering Your Burden of Control from Seven Women of the Bible, I investigated what God’s Word has to say about the struggle women often have with control. As I studied the stories of seven women in the Bible—which is ultimately a story about God—I was surprised to note the way these women were making the story all about them!

Sarah wanted a baby. Hagar wanted freedom. Rebekah wanted to control the future. Rachel and Leah wanted to outdo each other. And Miriam wanted to be honored. In each instance, a woman was contending for her own purposes rather than surrendering her story and her family to God’s greater, overarching purposes.

Mary could have been like the rest of these Bible women. She could have clung to her own small-minded ideals and plans for her family and her future. She could have tried to control even the Christmas story.

Just think of it.

When the angel arrived with news of her impending pregnancy, Mary could have become stubborn and feisty, saying, “Oh, no, I’m not having a baby. I’m planning my wedding! WED-ding. You got that, Mr. Gabriel?”

Or she could have taken a manipulative, damage-control approach, saying, “Joseph, let’s get married right now. If we hurry, we can make this look like a honeymoon baby. We have to! If you love me, you will.”

Later, when Mary arrived at Elizabeth’s house, she could have been self-absorbed, saying, “Elizabeth, my life is over! All of my dreams are smashed! No, I’m not being dramatic; I’m pregnant!”

At the end of her pregnancy, as Joseph saddled up the donkey for Bethlehem, Mary could have stamped her foot, saying, “Are you kidding me? Do you see this belly? I am not going. You can go by yourself, and I’ll stay with my mother.”

Then in Bethlehem, with contractions coming, she could have been entitled and rude, saying, “Joseph, did you tell that innkeeper who I am? I am the mother of God’s Son, for crying out loud. How dare He stuff me in this stable!”

Of course, Mary did none of these things. She was anything but a Christmas Control Girl. Instead, she was a beautiful example of a Jesus Girl. She gave up control and centered her life around Jesus.

Listen to the deep surrender in Mary’s words when she responded to Gabriel’s message. She said, “Behold, I am the servant of the Lord; let it be to me according to your word” (Luke 1:38). This is remarkable, because for all the honor of being chosen for this role in God’s story, there was just as much dishonor and sacrifice to Mary’s own personal story. Her life was going to be upturned, her plans and security threatened. Yet rather than objecting or panicking or obsessing, Mary responded with sweet, trusting surrender.

The fact that she reacted this way immediately (rather than needing time to warm up to the idea) leads me to believe that this wasn’t the first time Mary had said, “I am the Lord’s servant.” Turn-on-a-dime surrender doesn’t just happen. It’s cultivated over time. I’m guessing that in the weeks, months, and years leading up to this point, Mary had made a practice of saying, “Let it be to me according to your word.”

This practice is what separates Control Girls from Jesus Girls. Jesus Girls enter the day or the season with a disposition of surrender toward God. Control Girls habitually clutch their own small-minded plans for how everything should go.

Notice that when Gabriel burst into Mary’s life, disrupting all of her plans, he called her, “O favored one” (Luke 1:28). Apparently, Gabriel saw this life-interruption as God’s favor upon Mary. And the same is true for us.

God isn’t trying to make our lives miserable when He disrupts our idea of how things should go. Like with Mary, God’s interruptions in life are often invitations to play a role in the unfolding story that centers on Jesus. He asks us to set aside our plans and let our story get swept up into the bigger story that is all about God and His people. And like Mary, we have a choice. Will we try to take back control? Or will we surrender?

As a woman who craves control, I’m learning that I can’t live life both ways. I can’t clamp down on my own self-focused ideals and surrender to God at the same time. I can’t give vent to my desire for control over the future and surrender my future to God. I can’t develop a habit of insisting on my own way and keep Jesus at the center. This is especially true at Christmas.

Because I have heightened expectations at Christmastime, I must be careful to enter the season with extra focus on surrender. It’s ridiculous how bent out of shape I can get over little things like how the ornaments are arranged or the orderliness of gift opening. But surrendering in these little, momentary ways can train my heart for the bigger things God might ask me to surrender.

This Christmas whether I face big interruptions to my plans or small ones, I want to avoid the mistakes other Control Girls of the Bible made. I want to keep sight of God’s bigger story, which centers on Jesus, not me. Like Mary, I want to cultivate a heart of surrender that says, “Behold, I am the Lord’s servant; let it be to me according to your word.”

This is the way to make Christmas (and every other season as well) the “most wonderful time of the year.”

Does Christmas bring out the worst in you? What heightened expectations do you need to manage or let go of this Christmas? Which small thing can you surrender today, which will help cultivate an attitude that says, “Yes, Lord” to whatever big thing He might ask of you?

For more information on Shannon’s Bible study, Control Girl, which releases in January, visit her site.

Previous Post The Beauty of the Gospel After Abortion: Jean's Story
Next Post Articles, Resources, and More (12/16/16)

Free Yourself to Focus on Christ This Christmas