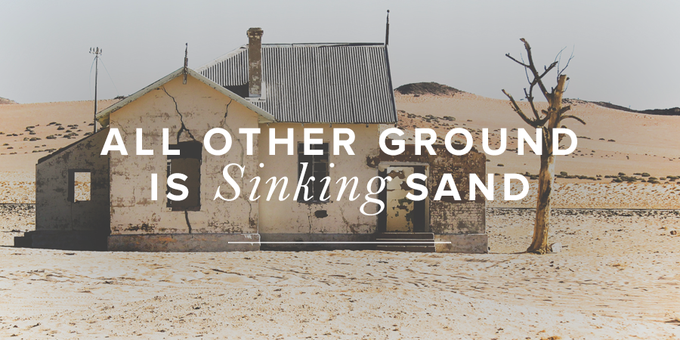 All Other Ground Is Sinking Sand

As I stood out on my front porch, chatting with a friend, I noticed something across the street. I said to her, “Does it look like that chimney is tilting?”

A couple of weeks later, it was obvious that I hadn’t been imagining things. You could see a thin line of daylight shining between my neighbor’s house and the beautiful two-story stone chimney that used to be attached. It was definitely tilting.

Then one morning, a month or so later, there were loud creaking, groaning, and cracking noises as the chimney pulled away and started to collapse. It landed on the ground within an hour—narrowly missing the other neighbor’s house by only a few feet. The once beautiful stone chimney now lay in a giant heap of rocks, leaving behind the naked corner of the house.

I later learned that the builder of this beautiful house had cut corners by not placing a foundation beneath the chimney. He built a two-ton chimney—literally—on shifting sand.

Integrity, the Bible tells us, is like a load-bearing foundation for life. Proverbs says,

“Whoever walks in integrity walks securely, but he who makes his ways crooked will be found out” (Prov. 10:9, emphasis added).

Are you a woman who craves security? Most of us do. No woman wants to wake up to creaking and groaning as some part of her world collapses. Nor does any woman want a gaping hole torn into her life. The Bible says that we can have the security we crave by walking—step by step, one decision after another—with integrity.

Integrity isn’t based just on what you know, but how you live. Jesus told a story about the difference between knowing what you should do and actually doing it:

Usually I think of wisdom as something you know. But Jesus, speaking of wisdom, puts the emphasis on what you do. He says, “Everyone then who hears these words of mine and does them will be like a wise man” (v. 24).

Jesus used this story as the punctuation mark at the end of His Sermon on the Mount. He had just addressed anger, lust, divorce, retaliation, loving your enemies, giving to the needy, and laying up treasure in heaven. It was as if He laid out the blueprints for a sturdy life, then asked, “Now, who’s going to build according to my plan?”

I’ve heard people say, “It sure would be nice if God would show Himself and tell us exactly how we should live.” But God did. Jesus showed up in the flesh and devoted this whole sermon (among many) to laying down measurements for right and wrong, good and evil, wisdom and foolishness. These people heard God Himself tell them how they should live.

But then so have we.

Unless you’re new to this blog or new to Jesus and His Church, I’m guessing you have a Bible. I suspect that in most instances you know what God says is right and good. But are you living according to God’s blueprints? Or is your life—as Proverbs 10:9 puts it—“crooked”?

Consider with me three observations from Jesus’ story about the two houses. Let’s think through what it means to lay a foundation by having integrity—by doing what we know is right.

In Jesus’ story, by the time the storm comes it’s too late to think about weatherproofing the house. The foundation has already been chosen.

It’s true in life, too. Picture two women who sit with their families in the same row at church, week after week. Both women hear the sermons. Both listen to truth. But when they file out each Sunday, their lives head in different directions. The first woman acts on her convictions on a weekly basis—even in drastic ways. But the second woman talks herself out of any conviction she feels. She rationalizes or procrastinates or gets busy.

So which woman is prepared to withstand the coming storms? Jesus says it’s the first woman, who has built her life on the rock. And why? Because back when she was filing out of church each week, she didn’t cave in to rationalization, procrastination, or busyness. She didn’t lie to herself about her sin. Instead she acted on her convictions. She followed God’s blueprints for her life. Over time, her obedience and convictions have cemented into place. Her security in the storm was put down long before the first crack of thunder.

The second woman, however, never laid a foundation. She has always caved in to her selfishness or fear or laziness. And now, when the stakes are higher, she stands only on shifting sand. She has no rock-solid foundation of obedience to steady her as the winds of fear, disappointment, grief, and anger howl.

Picture yourself, sliding out of your row each week at church. How do you respond to conviction? Is your heart tender to the Lord’s prompts? Are you quick to lay aside your pride or selfishness and realign yourself with God’s standards? Or do you lie to yourself about your sin and easily dismiss the Spirit’s conviction?

2. Listen to the sirens.

Anyone who has built a sandcastle knows it’s a bad idea to build on sand. So why did a professional builder place my neighbor’s chimney on a pile of sand, not cement? I can only assume that he thought there would be no consequences—at least not for him.

And isn’t that why all of us shrug off sin? We assume there will be no consequences. We figure no one will ever know. Sometimes we even nod our heads in agreement as God warns against bitterness, dishonesty, adultery, anger, worry, greed, debt, gossip, or lust. But then we choose to sin anyway!

Friends, this is a foolish, dangerous way to live! It’s like shrugging off the tornado siren or ignoring the hurricane evacuation. It’s like building a house on the beach, which will crumple under the first splattering of rain.

Jesus didn’t tell a story about a house that avoided the storm; He told about the house that could withstand the storm. We all have a storm headed our way. But not all of us are preparing for it.

Take inventory of your life. Are you ignoring any sirens, hoping the consequences will blow past? Are you behaving in ways that you would agree are wrong? Are you lying to yourself about your sin and its potential consequences? How will you humble yourself and align your lifestyle with God’s standards?

3. Consider the cost of collapse.

I wonder how much the builder saved by not adding a foundation under that chimney. I have no idea, but I’m guessing it was a small fraction of the cost to rebuild a new one.

Yes, maintaining integrity is expensive. Doing what is right, even when no one’s looking, will cost you something on a daily, moment by moment basis. But collapse is expensive, too.

In the story of the two houses, the one built on sand gave way to the storm. Jesus said, “It fell, and great was the fall of it.” We’ve all experienced the great thud of a marriage coming to ruin or the creaking of a church torn by deceit or the sharp cracking of a friendship destroyed by betrayal. The devastation and heartache that follow are costly to everyone impacted.

Yes, it costs us something every time we align ourselves with what God says is right and good. But the collapsed ruin of a life with no foundation is far costlier in the end.

How can you build a foundation of integrity? What are some ways that you will safeguard your life by doing what you know is right?

Whoever walks in integrity walks securely, but he who makes his ways crooked will be found out (Prov. 10:9).

Previous Post Reminders for the Weary, the Would-Be Adulteress, and the Childless
Next Post 5 Areas for Purposeful Goal-Setting

When Desire Gives Birth to Sin 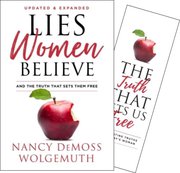