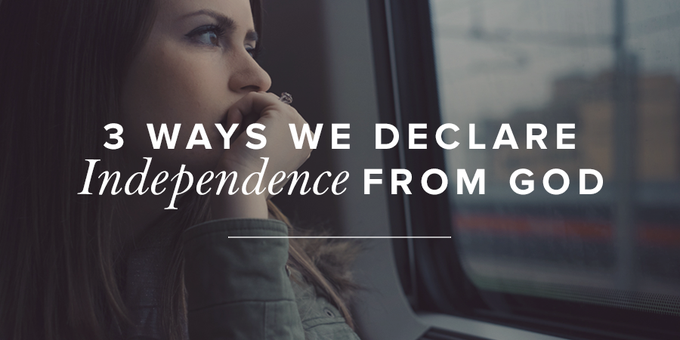 I drummed my thumbs on the steering wheel, waiting impatiently at the curb of my son’s school. Where was he? This was only one of many stops I needed to make on my evening “shuttle service.” Finally, my son appeared. But rather than looking around for me, he waved and walked briskly toward another car, several ahead of mine.

“But I’m here!” I said. “Tell James ‘thank you,’ and come on!” As we drove away, he explained that, knowing I had a busy night, he had made his own arrangements. James had been happy to give him a lift.

I, on the other hand, was not happy! I had moved heaven and earth to get there, but rather than feeling appreciated, I felt disregarded. My son had essentially demonstrated how little he needed me.

If my son’s disregard over something as insignificant as a car ride caused me chagrin, imagine how I’d feel if this became routine? What if he found another mom to wash his clothes and cook his meals? Or what if he sought professional help for a serious issue like bullying, depression, or a discovered lump, but never mentioned it to me?

No parent wants to be disregarded. I despise the thought of my children trimming me from their lives. I long to lean in close, providing them care, comfort, and support.

God, the perfect parent, is no different.

Now, God is never frazzled. He’s always fully capable and eager to care for our needs, and He wants us to trust Him (Matt. 6:25–33)! So what does it say when we turn everywhere but to God for support? What message do we send when we only seek help from professionals, friends, and experts, but never Him?

God does not call us industrious and resourceful as we scurry about, seeking God-free solutions for our broken marriages, troubling symptoms, and impossible debt. Instead, He says we’re stubborn:

“Ah, stubborn children,” declares the LORD, “who carry out a plan, but not mine, and who make an alliance, but not of my Spirit, that they may add sin to sin; who set out to go down to Egypt, without asking for my direction, to take refuge in the protection of Pharaoh and to seek shelter in the shadow of Egypt!” (Isa. 30:1–2).

I imagine there are times God could insert my name into those verses, saying, “Ah, stubborn Shannon . . . ” (Go back and read them one more time to see if your name fits, too.)

The stubborn woman ignores God. She is obstinate, independent, and strong. She trims God from both her plans and emergency contacts and pushes ahead with her own agenda. But the godly woman admits her weakness and becomes increasingly dependent on God. She lays her brokenness before the Lord, saying, “Apart from You, I can do nothing!” and, “In my weakness, You are strong!” (John 15:5; 2 Cor. 12:9).

From the beginning, God designed for us to live in dependence upon Him. But we’ve been pulling away from God, exerting our independence since day one. How insulting it is to Him when an unbeliever lives her life ignoring God—the One who created her and meets her moment-by-moment needs. Yet isn’t it even more offensive when one who claims to be God’s child does this?

Isaiah 30 paints a scene of God looking on while His own children set off briskly to find shelter in Egypt. “Hey! I’m here!” He calls, but they never even glance in His direction. How unthinkable, right? Yet we do the same thing. The prophet’s words echo their warning forward to us, too.

Think about your life’s greatest challenges at the moment. What does your heart grieve over, or what causes you the most angst? Are these difficulties prompting you to turn in fresh dependence toward God? Or are you ignoring God with your response?

Even if it’s unintentional, here are three ways you might be sending God the message you don’t need Him.

Egypt. It wasn’t always wrong to go there. When Joseph’s brothers faced famine, Egypt was an obvious choice (Gen. 42:1–2). And when Herod was after baby Jesus, God named Egypt as an escape route (Matt. 2:13). So why, this time, is God upset that His people are headed to Egypt? How exactly have they sinned? God says they made plans without even asking Him (Isa. 30:2).

Here’s what is consistent for each of us: God wants us to ask. Not assume, not do what seems logical, not bullheadedly pursue our dreams; He wants you and me to lean in to the pages of His Word, listen for His Spirit’s conviction, and ask.

God’s people were teaming up with Egypt. They sensed threats and were being proactive—but their plans were not of God’s Spirit (Isa. 30:1). They were plugging their ears to God and letting insecurity do all the talking as they ran straight for Pharaoh.

Do you let insecurity do the talking? Do you constantly reach out to people for security? Do you network and make “alliances” out of fear? God wants you to plug your ears to insecurity and listen to the voice of His Spirit who is always reminding you that you’re God’s child. You can call Him “Daddy” (Rom. 8:15–17)!

Tim Keller says, “The only person who dares wake up a king at 3:00 a.m. for a glass of water is a child. We have that kind of access.” You can go straight to God with any insecurity, any fear, or any threat! So imagine God’s frustration when, after giving you a family badge with personal access to Him, you choose to completely ignore Him and instead scramble to team up with mere mortals. He leans forward and says, “But I’m here!”

God was not pleased with His children running to Egypt instead of Him for refuge, safety, and comfort. It was like seeing your frightened child run past you to a stranger.

I read through the forty-seven times the word “refuge” is used in Psalms and noticed something. God’s help and deliverance seem to be activated by our dependence on God. Notice the emboldened connector words:

See how the psalmist reminds God of his reliance? He seems intent on letting God know that he is being purposefully dependent. Why? Because God responds to people who—rather than being stubbornly independent—choose to cry out to Him.

Picture a little girl playing near an aggressive pitbull. Her dad tells her to keep her distance, but she stubbornly moves forward with her little hand out. Then, when the dog snarls and snaps at her, the girl shrieks, calling, “Daddy!” and he immediately scoops her up to safety. Like a daddy, God loves to be our refuge when we humble ourselves and cry out to Him.

What makes you feel safe? What calms your fears? Do you turn to superficial safety from bank accounts, insurance, legal protection, or prescriptions? Or does your heart take refuge in God?

He’s It! He’s Everything

At Revive ’17, Linda Barrick and her daughter, Jen, shared a bit of their story about being struck by a drunk driver going eighty miles per hour. Jen was not expected to live, but after being in a coma for five weeks, she woke up. Eleven years later, they speak openly about the Lord, who never left their side during the darkest moments of their life. They invite others to know Jesus and trust Him as they do.

I’ve replayed Jen’s prayer offered up afterward at least a dozen times. Each time I am brought to tears and drawn to her intimacy with God. Here is a girl who, at age twenty-six, is not stubbornly making her own plans or stepping out in life with her own agenda. No, she recognizes with more clarity than most that her dependence is on the Lord. She knows that her life is in His hands, and she adores Him for it!

My favorite part was when Jen prayed, “We want to rest in You today, Lord Jesus, for You are wonderful, glorious, holy, righteous, Victorious Conqueror, triumphant and mighty, Healer and Deliverer, Shield and Defense, Strong Tower, and our Best Friend. Oh Daddy, You’re it! You’re everything!”

Friend, are you sending God a message that you don’t need Him? Are you making plans, building allies, and seeking refuge—turning everywhere but to God? Do you see how foolish this is? God is it! He’s everything! He’s motioning to you, saying, “I’m right here!” Won’t you put your trust in Him?

You Must Kill Self-Dependence and Grow in God-Dependence