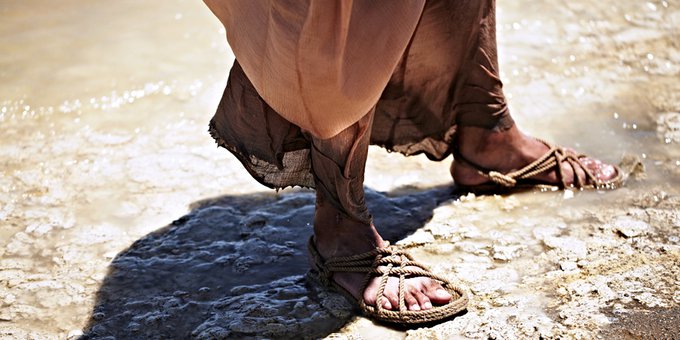 Easter is the time of year when we pause to remember all that Christ has done for us. But have you ever paused to consider what Jesus didn’t do for you?

Jesus ascending from earth to heaven makes sense to me, but what I can’t imagine is descending from heaven’s holiness to earth’s defilement. Yet that’s what Jesus did, leaving behind His sapphire throne for the rocky, thorn-infested terrain of the world with no place to lay His head. Christ willingly traded in the glorious fellowship He enjoyed with the Father for the company of self-righteous sinners.

He willingly traded the praises of heaven for something far less pleasing, “Away with him, away with him, crucify him!” (John 19:15).

2. He didn’t consider Himself better.

Though Christ dwells in unapproachable light and holds the world in place and tells the waves how far to come, He chose to make himself nothing. With “no form or majesty that we should look at him, and no beauty that we should desire him” (Isa. 53:2). Counting others as more significant than Himself, the Son of God became not only a man but a servant.

He washed the disciple’s feet, walked from town to town, and spoke to a Samaritan harlot. He healed, fed, and freed, ultimately giving His body as a ransom for sin, carrying His own jagged cross until He could no longer stand.

Even after fasting forty days in the wilderness, Jesus persisted in purity. Though the lure to lust, give up, give in, and get even stayed before the Lord with unveiled determination, no matter what, He didn’t give in.

They called Him a liar; they spat in His face; they testified against Him. Still, Jesus clung to holiness. I don’t know how He did it. I would have failed miserably from the start, but Jesus never once gave into His flesh so that He might become the holy and righteous Lamb necessary for our atonement.

You better believe I’d push back if the police showed up on my doorstep to arrest me for a crime I didn’t commit. Especially if I knew the offense was punishable by death. But Jesus didn’t resist the arrest. Knowing what was ahead, Jesus said to Judas, his betrayer, “Friend, do what you came to do” (Matt. 26:50). Then Jesus allowed His accusers to bind Him and lead Him away.

When Judas, along with a gang of soldiers, some chief priests, and a few Pharisees showed up to arrest Jesus, Peter was ready to fight. (I love Peter for that reason.) But Jesus said to him, “Put your sword back into its place . . . Do you think that I cannot appeal to my Father, and he will at once send me more than twelve legions of angels?” (Matt. 26:52–53).

But Jesus didn’t call for the angels. He gave no command to the host of heaven standing by to do His bidding. Instead, He had the angels stand down while He endured a vicious and cruel thrashing that ripped His body to shreds.

As drops of blood squeezed through His capillaries due to extreme emotional distress, Jesus prayed, “My Father, if it be possible, let this cup pass from me” (Matt. 26:39). In His humanity, Jesus didn’t want to go to the cross—I think that’s important to remember. But He went anyway because it was God’s will (Isa. 53:10).

Though Jesus desperately desired a different path, He didn’t choose His own way. He laid His agony before the Father and then declared, “Nevertheless, not as I will, but as you will” (Matt. 26:39).

Though the crowd sneered, “Let him save himself, if he is the Christ of God” (Luke 23:35), Jesus refused to do so. Let the record show He could have climbed down off the cross, ending His agony in an instant, healing His wounds, exacting revenge, and revealing His glory to everyone in attendance. But then where would we be? What hope would we have?

For the sinful and the forsaken Jesus remained in place, naked, tethered only by nails, while His lungs compressed, and His heart failed, and His flesh ripped, and the wrath of God poured over His soul.

8. He didn’t take His eyes off the prize.

It was for the joy set before Him that Christ endured the cross (Heb. 12:2). For our sake, Jesus pushed aside the shame, set His mind on heaven, and looked forward to the reward—the salvation of humanity and the restoration of righteousness.

We can’t even fathom all that God has in store for His children, but Jesus knew. His seat at the right hand of the Father, interceding as our High Priest, offering forgiveness and grace and peace for all who come to Him is the joy He perceived. And He let nothing get in the way.

He didn’t give up on us.

Humanity still hasn’t changed its ways. We’re still sinning; we’re still sabotaging God’s glory and denying God’s holiness, insisting on selfishness over selflessness. Even after the prophets warned of coming judgment and God exiled Israel and the face of God walked the earth and the arms of God stretched taut on a cross, we’re still committing the same grievances we always have. And yet, Jesus refuses to give up on us.

But where sin has increased, so has grace. Where transgression has traversed, so has mercy. To this day, Christ is still removing our sin as far as the east is from the west (Psalm 103:12), and He will continue to do so for all who come to Him until every indiscretion is wiped clean.

Jesus declared in John 16:7, “It is to your advantage that I go away, for if I do not go away, the Helper will not come to you. But if I go, I will send him to you.” By grace through faith, the same Spirit who raised Christ Jesus from the dead now lives in us (Rom. 8:11).

Thank you, my Savior, and my God, for all you did and for what you didn’t do for me. May all God’s people praise your name and give glory to the King for the many ways your gracious love has saved humanity.