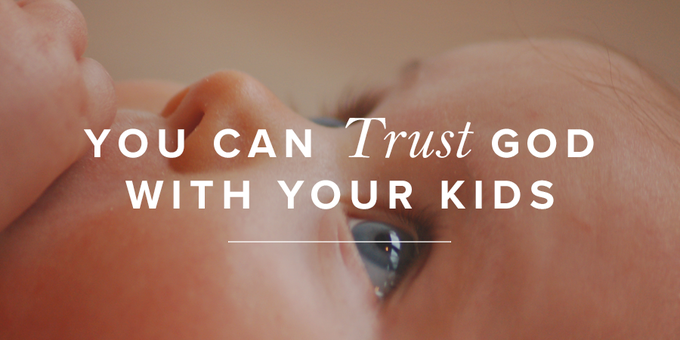 You Can Trust God with Your Kids

A friend of mine once said that she didn’t know what fear was until she had children. I sometimes feel the same. As a mother to three precious boys, I have become practiced in fearing imaginary futures for them. Over the course of my eight years as a mother, I have feared everything from terrorist attacks to disease to my child being separated from God. When I looked to God’s Word for help, I found encouragement—not to care less about what happens to my children but rather to fear God more.

Navigating the complexities of motherhood is not easy, but Proverbs 9:10 says “The fear of the LORD is the beginning of wisdom.” When we fear God most of all, many of the puzzle pieces come together.

This Proverbs 9 style of fear arises out of a strong, unshakable conviction that God is better, stronger, and wiser than you or anything else in the world.

Does the fear of the Lord motivate your parenting decisions? If you are trusting in anything other than Him for your child’s happiness and security, here are five reasons you should trust God instead.

1. Because God Has the Power to Save Your Kids

Paul prays that the Ephesians would know “the immeasurable greatness of his power” toward those who believe (Eph. 1:19–20). He wanted them to know that the God who raises the dead also intercedes powerfully for His people.

Moms who feel weighed down by the responsibilities of raising children can rest easy, knowing that Jesus has the power to give their kids eternal life, and no one can snatch a believer out of His hand (John 10:28).

We don’t need to frantically look for the magic formula to produce healthy, successful, and God-fearing kids. Instead, we can look to the Lord for hope, help, and salvation and resist the temptation to trust in less worthy things.

2. Because Christ Is More Attractive Than Anything the World Has to Offer

Sometimes we try to shelter our children from certain people, worldviews, or activities because we are worried they will draw our children away from the faith. But if kids see that Mom and Dad understand the world they live in, they are not afraid of it, and they think that Christ is so much better, then that gives them a certain confidence about Christ’s supremacy.

Of course, we don't want to expose our kids to things that they are too young to deal with. We need to wait until they are mature enough to understand and discriminate. But we must always remember that there is nothing out there so sophisticated, beautiful, or alluring that Christ pales in comparison.

3. Because Pleasing People Won’t Get Your Kids into Heaven

A common temptation for us mothers is to care too little about God’s opinion and too much about other people’s opinions.

Jesus spoke against this temptation in Matthew 10:28. He said, “And do not fear those who kill the body but cannot kill the soul. Rather fear him who can destroy both soul and body in hell.”

It’s tempting for us to pressure our kids to be something they were never meant to be. Kids are not a walking vindication of all the time and energy we have poured into them. They were made for more than this. Their job is not to please other people or to make us feel good about ourselves. They are sinners in need of a Savior, just like anyone, and their purpose in life is to give God glory.

Proverbs 29:25 says, “The fear of man lays a snare, but whoever trusts in the LORD is safe.” So whether you are criticized or applauded in your parenting methods, let it rest lightly on you. God will ultimately judge the living and the dead (1 Peter 4:5), and He has a straight, steady view into the heart of the matter. He is “slow to anger and abounding in steadfast love” (Ps. 103:8), and those who trust in Him are kept safe.

Many of us are consumed with guilt or anxiety when other parents do more for their kids than we do for ours. We are afraid to slow down because our kids will be left behind.

But God will not favor our children if they simply grow up to be successful adults by worldly standards. God shows no partiality, “but in every nation anyone who fears him and does what is right is acceptable to him” (Acts 10:35, emphasis added).

From God’s perspective, the fear of the Lord trumps achievement every time.

Our achievements and ingenuity may make us feel secure, but they can be taken away in a moment. Our life is short, like a “mist that appears for a little time and then vanishes” (James 4:14), but the fear of the Lord holds eternal value.

5. Because We Can’t Control the Future

This is maybe the hardest one for a mother. We need to trust that God is both sovereign and good, even if our children's future holds something we would not want for them.

None of us know whether the future holds war, disability, broken relationships, or other suffering for our children. And the horrible truth is, we can't protect them from it. But God doesn't leave us alone in our struggles. He tells us:

Fear not, for I am with you;  be not dismayed, for I am your God; I will strengthen you, I will help you, I will uphold you with my righteous right hand (Isa. 41:10).

The most natural expression of our trust in God is prayer. When we ask God to intervene on behalf of our children, we are saying that we fear Him more than anything. He may not answer in our timing, and He may choose to allow something harder than we would have wanted for our children, but we can be sure that He will act according to His good character (Ps. 136:1).

Pleasing people won’t get our kids into heaven, and the best opportunities won't save them, but God has the power to transform our children and keep them secure for eternity.

What motivates your parenting decisions? Do you trust God with your children?

Previous Post Are You Pointing Your Suffering Friend to Earthly Things?
Next Post God Is in Control, Even When Life Isn’t