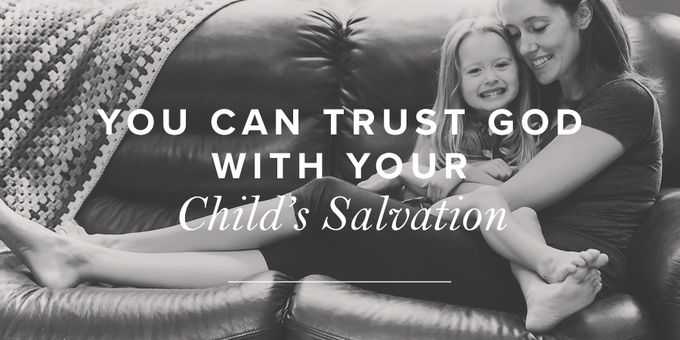 You Can Trust God with Your Child’s Salvation

When my kids were little, I wasn’t the mom who insisted on bike helmets and sunscreen. I fed my kids plenty of junk food and let them loose on our trampoline, which had no net. While I didn’t obsess over their health and safety, there was one concern that kept me up at night: my kids’ salvation.

I didn’t worry about undertows, kidnapping, and allergic reactions; I worried about the words of Jesus who said, “And do not fear those who kill the body but cannot kill the soul. Rather fear him who can destroy both soul and body in hell” (Matt. 10:28). Nothing terrified me more than the thought of one of my kids traipsing down the wide path that leads to destruction. I wanted each of them to choose the narrow path that leads to life (Matt. 7:13)! But unfortunately, I thought it was my job to get them there.

My kids still vividly remember the day I demonstrated the discomfort of hell using a candle. I had gathered them for Bible time and was talking somberly about their need for salvation—which was not out of the ordinary. But this time as I talked about sin, Jesus, and the cross, Cade (who was four at the time) was being silly and playing with our dog, Theo.

In frustration, I turned out the lights, lit a candle, and held Cade’s chubby hand over the flame until it grew uncomfortably hot. As you can imagine, I succeeded in getting everyone’s attention. I talked forcefully about hell’s lake of fire and outer darkness and gnashing of teeth (Rev. 19:20; Luke 13:28). My kids also claim that I called Theo a “messenger of Satan” who was distracting them from truth (2 Cor. 12:7). All of this made quite an impression, but not the one I was going for. My kids thought I was crazy! They were more scared of me than of hell. Theo just wagged his tail.

I promise you that I’m not completely crazy. My kids survived, and thankfully—in spite of the candle event and others like it—they each love Jesus and follow Him. But perhaps you’re wondering what might possibly prompt a mom of littles to turn off the lights and hold her preschooler’s hand over an open flame? I know what. Fear. Anger. But most of all a desire for control.

With the candle casting a dramatic glow to my face, I realized that I was driven by fear. Fear that they wouldn’t listen. Fear that they might not respond. Fear that I wouldn’t be able to persuade them. And I was also aware of my anger. Anger over the dog distracting them. Anger because I couldn’t get them to be serious. Anger that my plans to share truth were being upturned. My sinful anger and fear were obvious, but I was naively unaware of my underlying problem with control.

As someone who relishes God’s sovereignty, I find my struggle with control ironic. I’m quick to argue that God is free to do all that He pleases. I’m also quick to affirm that salvation is held firmly in His hands. So why was I lighting candles?

Apparently, I felt it necessary to squeeze my kids’ hearts with shame over their sin. It seemed good and right to take responsibility for their repentance. Commandeering my kids’ destinies not only felt possible, it seemed honorable, as if good moms were the ones who found a way to convince their kids to repent and be saved.

Yet lunging for control—even over something as critical as my kids’ salvation—never produces the security, peace, and joy that I imagine it will. When I heap the burden of control up onto my own shoulders, I not only stagger under its weight, I also become the worst (angry, fretting, rattled, obsessed, hand-wringing, perfectionist, anxious, flame-lighting) version of myself.

Rebekah, the mother of Jacob and Esau, had the same struggle. Like me, Rebekah enthusiastically believed that God had sealed her sons’ destinies. But also like me, Rebekah mistakenly thought it was right and good to stand in for God and take control.

Now Rebekah did have a special circumstance. Before her twins were born, God had prophesied, “Two nations are in your womb, and two peoples from within you shall be divided; the one shall be stronger than the other, the older shall serve the younger.” (Gen. 25:23, emphasis added)

This was an extension of the prophecy given to Abraham about God making him a great nation, but the “divided” part was new. No doubt Rebekah found it troubling to learn that her family tree would be split in two. Jacob (the younger twin) would be the father to God’s people, and his older brother would become God’s enemy. But then came something even more troubling.

When the twins were grown, Rebekah’s husband made plans to bless Esau—which was customary, since he was older—and name him as the leader of God’s people. He was completely disregarding a prophecy from God. So what did Rebekah do? She sabotaged her husband’s plans.

I’m sure Rebekah was convinced that it was good and right to dress Jacob up in Esau’s clothes and put a steaming plate in his hand like a prop. I’m sure it seemed necessary to direct this charade so that she could trick her husband into blessing the rightful son—the one God had chosen (Gen. 27). But as Rebekah stood in for God, she did not act in faith. As she manipulated the details and took control, she did not rejoice in God’s sovereignty. She did not trust God or anticipate the way He would make good on his promises. Instead, she revealed how much she doubted Him. She trusted herself to take control, not God.

This same thing could be said of me the day I lit that candle—and on many other days like it. Rebekah’s story issued a stern warning against believing the façade that I can and should take control. But it also offers some strangely soothing comfort.

When I read that before Rebekah’s twins were even born, God singled out one branch of the family tree to bless, it stirred up a whole bunch of salvation questions and concerns for my own children—and all the other people I want God to save. The possibility of our destinies being split like Rebekah’s family tree is horrifying!

Yet tucked inside Rebekah’s prophecy is a striking truth which is helpful for Control Girl mamas like me. Here it is: your salvation is not based on who your mom is. Both Jacob and Esau had the same mom. Rebekah was neither the reason that Jacob followed God nor the reason that Esau didn’t.

To find this comfort, you have to consider the alternative. What if, rather than a prophecy, Rebekah had been given a command? What if God had placed the responsibility for her sons’ destinies squarely on her shoulders? What if He expected Rebekah to produce God-honoring faith in the hearts of her two twin boys? And what if God expected this of me?

What if it was my job to corral my kids onto the narrow path? What if their eternal destiny hinged on my ability to get them to listen and understand and repent and follow the Lord? How terrifying! How exhausting. I can only imagine what sort of candle-burning, fit-throwing, tactic-forming Control Girl mama I would become.

And what if I could dress my child up and poke and prod him into winning God’s blessing? What would this say about God? He wouldn’t be in control; I would. And how comforting would that be?

God Is in Control

There is no relief or security in presuming that I can command my child’s destiny. None! Rebekah’s frantic manipulation demonstrates this well.

As parents, we do have the privilege of laying out the jewels of the gospel and showing our kids how they sparkle, but that’s where our work ends. Salvation is God’s work, not ours, and oh, what comfort this brings.

Rebekah’s prophecy was given so that we—as moms, dads, neighbors, and friends—might not become confused and assume that we can control anyone’s destiny. Romans 9:16 says, “So then it depends not on human will or exertion, but on God, who has mercy.”

My child’s destiny is held in the wise, merciful hands of God, not my faltering, candle-lighting ones. God is in control, which means I don’t have to be!

This post is taken largely from Shannon’s book, Control Girl: Lessons on Surrendering Your Burden of Control from Seven Women in the Bible.

Previous Post True Woman Summer Book Club 2019: Week 4
Next Post You Have a Friend in the Valley

Is My Child Ready to Make a Decision to Follow Christ?