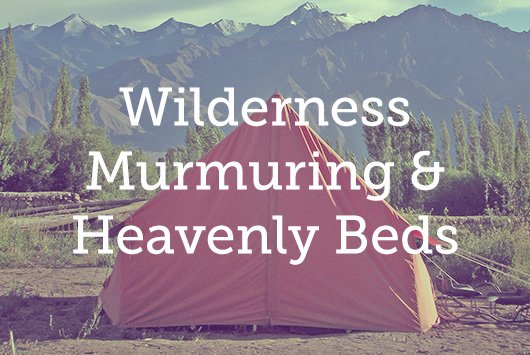 I'm not much of a tent-pitching camper. I enjoy the outdoors much more than I used to and love a good hike through God's beautiful creation, but I'd prefer not to sleep there, cook my food there, or bathe there. My idea of camping is a good bit of exercise outside by day and settling into a heavenly bed at the Hampton Inn by night.

So I can only imagine how the Israelites felt wandering around in the wilderness for forty years. With no place to call home, the constant threat of enemies, and times of wondering where their next meal would come from, they were understandably under some duress.

Yet ruminating on their duress gave birth to sin that Moses called out in Deuteronomy 1:26-27:

Yet you would not go up, but rebelled against the command of the LORD your God. And you murmured in your tents and said, "Because the LORD hates us he brought us out of the land of Egypt, to give us into the hand of the Amorites, to destroy us."

Sure, they were scared and influenced by their brothers' bad report (v. 28), but it was still called rebellion because they didn't obey their God and believed a lie about Him. They had forgotten where they had come from, where they were going, and Who was leading them all the way.

Our modern-day murmuring may sound more sophisticated, but it's no less offensive to God.

Murmuring didn't die off with the Israelites in the wilderness, though. Our modern-day murmuring may sound more sophisticated, but it's no less offensive to God. Often, murmuring is really saying:

Those examples sound harsh, yet that's the stark reality of the sin in grumbling and complaining. It's rebellion against God. And it's this shocking realization that He used to convict me of my attitude in the midst of my less-than-hoped-for circumstances.

His Spirit has told us through His Word that He is working ALL things for the good of those who are His (Rom. 8:28). Because of Christ, this promise can never be revoked (2 Cor. 1:20). But "good" doesn't always mean initially desirable, easy, or fun. "Good" means that we will be made more like Christ—who shed His blood in obedience to the Father and in resisting the devil (Rom. 8:29; Heb. 12:3). Our hope-filled, heart-lifting, joy-producing guarantee is that desirable, easy, and fun will come in the new heaven and earth because God is there, and we get to be with Him. Why? Because Jesus is alive, and there's no need for blood-shedding anymore (Heb. 9:26).

You may be facing extremely hard, confusing, or dismal circumstances today. Or you may be in a boring, irritating, or seemingly stagnant season. I pray the Father would give us grace to repent and to remember that, just like our spiritual forefathers and mothers in Deut. 31, He:

And in His love and justice, He purifies us through disciplining our rebellion (v. 34-36) so that we might not die in the wilderness (Heb. 12:10, 14–15). May He enable our hearts to trust in Him, praise Him, and say, much like the Psalmist, "Better is one day camping in the wilderness with You, Lord, than a thousand heavenly beds elsewhere" (Ps. 86:4).

Are you doing any grumbling that you need to confess to the Father and turn from?