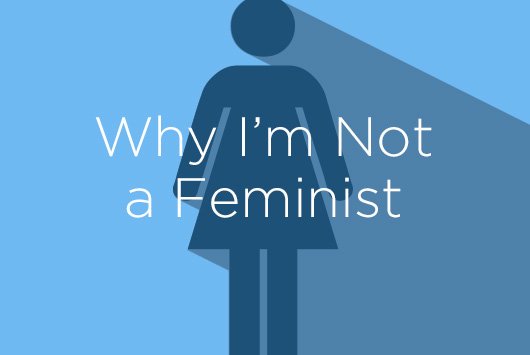 Why I'm Not a Feminist

Drop this word into a room full of women and you're sure to ignite a firestorm . . .

On the surface level, feminism looks benign. If feminism is simply the advocacy for women's rights based on the idea that we are equal to men, I'm a believer.

My gender theology comes from Genesis 1:27.

"So God created man in his own image, in the image of God he created him; male and female he created them."

From the very first book of the very first chapter of the Bible, we see that men and women were created equal by God, equally esteemed by God, and given the equal and complementary task of being image-bearers of God.

The Bible is clear, when it comes to our value to the Creator, men and women are equal.

But the message of feminism does not stop there. You may be wondering, Who cares? This isn't a blog about historical social movements after all. Didn't women leave their bra-burning ways back a couple of decades ago?

In truth, feminism is the radical idea that women are god, capable of being their own authorities.

As Christian women, it's wise for us to consider the message of feminism and squeeze it through the grid of God's Word. I don't have all of the answers, but I know this: Because of the Bible, I am not a feminist. Here's why.

I recently saw these promises on the cover of a popular teen magazine . . .

While financial independence is a good thing, "total independence" is not God's plan (especially for the thirteen through sixteen year olds this magazine targets). God does not intend for us to be renegades who live without the assistance and accountability that our families, friends, and churches offer. Even more than that, God wants us to depend on Him, not take the proverbial bull by the horns.

"Trust in the Lord with all your heart, and do not lean on your own understanding. In all of your ways acknowledge Him and He will make your paths straight."

Feminism asserts that it's a woman's right to do, be, feel whatever she wants, regardless of the input of others. Because of that . . .

The Bible is clear that authority is for our good. Romans 13:1–7 insists that everyone (men and women) be subject to governing authorities because all authority is "approved by God" (v. 1). First Peter 2:13–25 urges us to be subject to every human institution. Why? "For the Lord's sake" (v. 13). Hebrews 13:17 encourages us to obey our spiritual authorities with joy and without groaning. And finally, in a passage that has a tendency to really ruffle feminist feathers, Ephesians 5:22–23 urges wives to submit to the authority of their husbands.

When you study the totality of God's Word, it's clear that God commands us to honor and obey our authorities for our own good. No authority is beyond His reach. No one has more say in our lives than He does.

Ultimately, the way we respond to our human authorities is very likely to be how we respond to the authority of God. If we arch our backs and pump our fists at every person and institution that infringes on our perceived rights, we are likely to respond in kind to God when He calls us to surrender to Him.

Feminism Denigrates the Roles of Wife and Mother

Famous feminist Gloria Steinem said, "A liberated woman is one who has sex before marriage and a job after."

Idol worship never meets our needs. Only God can do that.

While the headlining message of feminism has always been equal rights for men and women, a consistent, secondary message has been that women need more than being "just" wives and moms. This just doesn't jive with the truth that God highly values the roles of wife and mother.

I could shout from this soapbox all day, but I think this point is best made with just two passages of Scripture.

In Ephesians 5:32 Paul is describing marriage when he says, "This mystery is profound, and I am saying that it refers to Christ and the church."

Marriage is a picture of Christ's love for His bride. As wives, we are putting the mystery of the gospel on display. That picture is cheapened when we devalue marriage.

Psalm 127:3 says, "Behold, children are a heritage from the Lord, the fruit of the womb a reward."

Children are a blessing, not a burden. Motherhood is sacred, not old fashioned or out of date.

As a young woman with a shallow understanding of God's Word and a steady drip of feminist ideals into my heart, I didn't know it, but I was a feminist. I believed I was the captain of my own destiny, that the path to fulfillment was through a killer career, and that men were best avoided or controlled. But you know what? It didn't work.

Independence left me lonely.
Success left me addicted.
My new marriage was stretched and strained.

Ultimately, the promises of feminism just didn't hold true. It is a belief set that ultimately promotes self to the point of idolatry. Idol worship never meets our needs. Only God can do that.

There are lots of causes I'd gladly march in support of, but feminism just isn't one of them. God's blueprint is what's best for me as a woman. The message of feminism is a cheap substitute.

If I Had a Million Dollars (Why I'm Not a Feminist)

This Ain't About Throwbacks