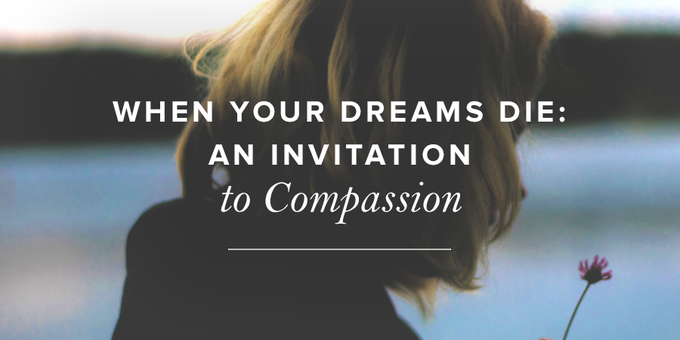 When Your Dreams Die: An Invitation to Compassion

If you've ever spent time around someone who thinks they know everything, you've got a pretty good picture of what I was like in my late teens to early twenties.

I had it all figured out, folks.

I shared my opinions freely. I judged silently but liberally. I was impatient with weakness.

After all, I had a clear vision for my future. I was getting ready to lay down my life as a missionary or pastor's wife and change the world for Jesus. I was too full of important dreams and ambitions to stop for anyone who didn't fit into my idealistic little world. So I sprinted by them—the weak, the waiting, the hurting, the hesitant—me in my running shoes with a spring in my step.

But God was about to stop me in my tracks and make me walk miles upon miles in their shoes. Over the past two decades, He has paved my way with "severe mercies" to teach me how to sit with the wounded in their pain. To listen and learn. To be patient with weakness. To forgive.

And one story in particular has helped me embrace the uncomfortable way of compassion . . .

At seventeen years old, Joseph was a boastful dreamer and a favored son with a colorful coat to prove it. Reading between the lines of Genesis 37, we can easily imagine Joseph being a know-it-all. And we definitely don't see any signs of tender-heartedness or sensitivity to others.

But by age thirty, he had become a deeply compassionate man, with a capacity to forgive great injustices and a skill set that helped him meet the needs of thousands who otherwise would have died.

How did this transformation happen in the span of just thirteen years? What could turn a priggish little punk into a mighty man of mercy?

You know the story. Joseph is betrayed by his brothers, sold as a slave to a foreign land, wrongly imprisoned, and then (insult to injury) forgotten by fellow prisoners he'd shown great kindness to. Because we know this story so well, we can forget the sheer trauma of these circumstances.

Can you even begin to imagine your own siblings selling you into slavery? And then being accused of rape by a woman you'd resisted in purity? Then imprisoned by her husband, the very man you had faithfully honored?

By human standards, Joseph had every right to be an angry, victimized, incapacitated man.

Yet somehow Joseph nurtured a tender, forgiving heart, so that years later he was able to look his traitorous, hateful brothers in the eyes and say, "Do not be distressed or angry with yourselves because you sold me here, for God sent me before you to preserve life. . . . So it was not you who sent me here, but God" (Gen. 45:5, 8).

Joseph was made of flesh and blood like you and me, so he must have longed for vindication when he was so grievously wronged. Inevitably he wrestled through anger, sadness, fear, perhaps even despair. And while suffering must have been a powerful tool of humility and maturity in this dreamer's life, suffering in and of itself can't produce a compassionate heart. (In fact, as you and I well know, it often leads to a hardened, embittered heart.)

God Was with Joseph

In Genesis 39, we learn the secret to staying tender and tenacious through suffering. Four times it says:

The LORD was with Joseph.

God was with Joseph.

And that changed everything. God’s nearness was Joseph’s good (Ps. 73:28), and it resulted in the saving of many lives and the preservation of God's chosen people.

God's nearness was Joseph's good, so he was able to say, "God did this to me so that others could live."

Had Joseph remained at home, comfortably cloaked in the favor of his father, history would tell a very different story today. God's promises would have failed, and the Messiah would never have come. But God mercifully moved Joseph and gifted him with a long season of suffering and the intimate experience of His transforming presence.

From Color-Coated to Compassionate

Still I find myself judgmental at times. Short on compassion. Missing opportunities to meet others' needs because I'm so wrapped up in my own.

But walking through weakness and hardships with Jesus has been a beautiful journey that is slowly changing me. And while I haven't experienced sufferings like Joseph's, I've experienced the “with-ness” of his God. Because God has forgiven me, I can forgive others. Because He has comforted me with His presence, I can comfort others. Because He has walked in my shoes, I can walk in theirs. Because He laid down His life to love me while I was still His enemy, I long to learn how to lay down my life to love the lost ones around me.

If we could sit down together and swap stories, I'm sure we'd both agree that the road to compassion can be costly and uncomfortable, but it is the way of joy. Because when it feels like we've died to our dearest dreams and life doesn't look anything like we think it should, we finally have ears to hear God say, "Come with Me, beloved child—I have works of love for you to do."