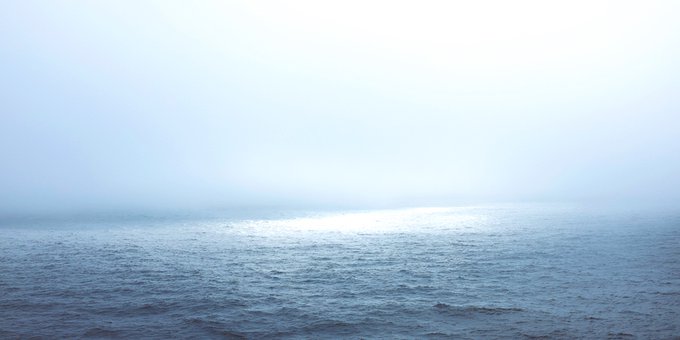 Fog. It can be lovely and poetic. Imagine a luxurious curtain of silk, hovering over a mirrored-glass lake or gently draped across a cornfield after a cool autumn rain. Isn’t that a beautiful picture? Doesn’t it beg you to snuggle up with a thick flannel blanket and a good book?

Of course, that’s not how we typically experience fog. The fog we encounter is more often thick and menacing. It’s blindingly white, riddled with pinpricks of icy mist. Or perhaps a yellow-green-gray pea soup fog—the color of an ugly sky before a tornado. This kind of fog obstructs. It obscures, oppresses. It engulfs us as we drive down the road in a constant state of fight or flight, wondering if we’ll meet the front end of an oncoming bus instead of our destination. The fog turns us around. We lose our bearings.

Famed long-distance swimmer Florence Chadwick, whose story I heard only recently,1 knew a thing or two about fog. It was the Fourth of July in 1952 when Chadwick attempted to take her place as the first woman to swim the twenty-one mile breadth of the Catalina Channel off the coast of California.

The story goes that the weather was terrible—the ocean was ice cold and blanketed by a fog so dense that Florence couldn’t see the boats that followed her. Those boats, by the way, carried a crew bearing rifles to drive away the sharks. After about fourteen hours in the water, Florence began to doubt her ability to complete the swim. Though her mother and her coach, who followed close behind in one of the support boats, encouraged her to go on, after fifteen hours and fifty-five minutes, Florence felt she could go no farther, and with land nowhere in sight, requested that they take her out of the water.

Almost immediately Florence realized her folly: she was a half mile from shore.

How did this happen? she must have thought. How could I not know how close I was to the finish? Apparently she found her answer. “Look, I’m not excusing myself,” she told a reporter later, “but if I could have seen land I know I could have made it.”2

If I Could Have Seen Land

Of course none of us stand in a position to criticize the poor woman for her lack of faith. After all, what happened to Florence Chadwick happens to us all the time. When Florence couldn’t see the shoreline for the fog, she became disoriented. She got scared. She lost confidence in her ability to complete the journey. She doubted the things she knew to be true—her training, calculations, the encouragement of her mentors—because she just couldn’t muster up the faith to believe without seeing.

Do the last six months seem to have been blanketed with an impenetrable fog? Have you felt surrounded, suffocated even, by its murky thickness? Have you vacillated between fear and apathy at what might lurk, unseen, between you and the shore?

Lord, if I could only see the shore, I know I could make it. But this—this uncertainty, this unknown distance and time—this I cannot do. Pull me up out of the water!

Faith Is the Shore You Cannot See

“Now faith,” the book of Hebrews tells us, “is the assurance of things hoped for, the conviction of things not seen” (11:1). “For by it,” the writer continues, “the people of old received their commendation. By faith,” he says, “we understand that the universe was created by the word of God, so that what is seen was not made out of things that are visible” (11:2–3).

Do you hear the voice of faith cheering you on from the lifeboat? That voice assures us that though we can’t see God, He has been made known to us by His Son (John 1:18). Colossians 1:15 says Jesus is “the image of the invisible God.” And where do we go to see that image? To hear it speak? To touch it? We go to the living, active, Word of God.

That’s the difference between Florence Chadwick’s story and ours. When Florence couldn’t see the shoreline, she looked to herself and found herself lacking. If we look to ourselves we will find the same thing. But when we look to our faithful Father in His Word, we see a very different picture. We see the God of the shoreline:

We don’t know how the coming months and years will play out. That list of fears lurking in the fog—illness, violence, division, persecution, loss—could become a reality. But please hear my shout rise up from the boat behind you:

“Keep going! Keep swimming! This is no time to retreat!”

We’re all growing fatigued; we’re waterlogged. I believe that God will provide all we need to endure whatever lies between us and the shore, but we cannot beg to be pulled out of the water. Why? We have too much to do.

We may not have miles to swim, but we do have gospel hope to share. We may not have records to break, but God has hearts to revive. We get to be a part of that. And time is running out.

Then I saw heaven opened, and behold, a white horse! The one sitting on it is called Faithful and True, and in righteousness he judges and makes war. His eyes are like a flame of fire, and on his head are many diadems, and he has a name written that no one knows but himself. He is clothed in a robe dipped in blood, and the name by which he is called is The Word of God. (Revelation 19:11–13)

Sure it’s foggy, but the One who is called Faithful is coming. Just fix your eyes on Jesus and keep swimming. Florence Chadwick, by the way, made her second attempt two months later. The weather was just as foggy as before, but this time, she persevered, not only becoming the first woman to make the trek, but shattering the previous record by two hours. Friends, I don’t know what changed for her, but I do know Who waits on the other side for you.

When you can’t see the Shoreline, trust the Author of the fog.