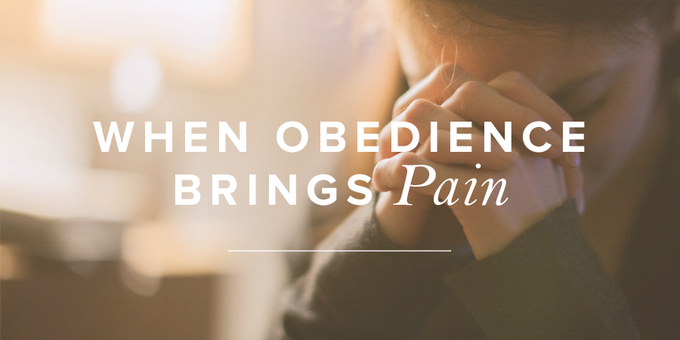 A few years ago, while traveling to Uganda, I met a little girl and completely fell in love with her. My family began caring for her needs from afar, visiting her twice a year and praying for her. Eventually God made it clear that He wanted us to pursue her adoption. I thought my heart would burst for joy because I wanted to welcome her into our family so badly.

A month before we were to travel to Uganda to complete her adoption, this little girl suddenly passed away. There are no words to describe waking up on a Sunday morning to the news that this daughter of ours was dead. I’ve been consumed with processing the hurt and confusion concerning what happened.

These emotions aren’t limited to what happened to my daughter. I’m working through my hurt and confusion over God’s hand in this. I obeyed Him. I did what He told me to do. I followed where He led. And now I’m suffering for it.

Obedience is supposed to bring blessings, right? What happens when obedience brings pain? We go out of our way to protect ourselves from pain and suffering. But our strategy of avoidance is a fool’s errand for believers. Following Christ will eventually lead to suffering. Scripture tells us not to be surprised when trials come (1 Peter 4:12). We must broaden our understanding of obedience to include the truth that we may suffer for our obedience.

Suffering for obedience is hardly limited to my story. Scripture is filled with stories of those who obeyed even when it hurt. Consider Mary when the angel Gabriel visited to tell her that God was about to make her, a virgin, the mother of the Savior of the world. Mary’s response was, “Behold, I am the servant of the Lord; let it be to me according to your word” (Luke 1:38).

Don’t mistake her short answer for naivety. Mary knew some of what she was getting into. She knew she was in for a life of scandal, persecution, and loss. Not to mention the pressure of raising God’s Son! She may not have been able to fully comprehend the ramifications of her virgin motherhood, but she had to know she would suffer for her obedience. And yet she obeyed.

Consider Hagar, Sarai’s servant. She was given to Abram by Sarai, so she could bear him a son. She did what Sarai wanted, became pregnant with Abram’s child, and then Sarai turned on her. She was so mistreated, she fled to the wilderness. The angel of the Lord found her and told her to return to Sarai and submit to her (Gen. 16:9).

I can’t even begin to explain the dynamic between Sarai and Hagar. But I am sympathetic to Hagar. She’s given to a man she did not choose, she becomes pregnant, and the woman who forced her into this treats her harshly. It’s no wonder she wanted to be free from that household! Returning to Abram and Sarai meant more suffering for Hagar. And yet she obeyed.

Christ Is Our Ultimate Example

We need look no further than Christ for the ultimate example of someone suffering for their obedience. Remember the cross. Remember that one of God’s primary purposes in sending His Son to earth was to suffer on the cross for you and for me, thus securing our redemption. Remember Christ praying in the Garden of Gethsemane before He was crucified, “Father, if you are willing, remove this cup from me. Nevertheless, not my will, but yours, be done” (Luke 22:42). He chose to submit to His Father’s will, knowing the great cost He would pay.

Laying down our will is a death to die each day. And death is painful. We must be prepared to hurt when we die daily to our desires. My will wants my daughter alive and present with me. Her loss creates emptiness and longing. However, I know that my trial is bringing me to a place where I lack nothing (James 1:2–4). It’s bringing the good work He began in me to completion (Phil. 1:6). This journey of obedience is good but not without suffering. This journey is possible because Christ obeyed even when it hurt.

Obedience Is Always Worth It

Can we obey God knowing we might suffer for it? Do we want His glory revealed even when it will cost us something dear? Is there a secret to obeying even when it hurts? These are hard questions that appear to have obvious answers to those who haven’t been tested. But for those of us who have, you know the “church answer,” while easily professed, can be painful to apply.

Often, what He desires for me doesn’t make sense. In those times, I cling to His Word. “Trust in the LORD with all your heart, and do not lean on your own understanding” (Prov. 3:5). We have no problem saying we trust God. But all our words are just words until they’ve been tested. The beauty of testing is that you learn to believe the words that you easily say. And when we truly believe that He is trustworthy, we will gladly lay down our wills for His and obey, even when it hurts.

Obeying the Lord may mean saying “no” to your desires and “yes” to pain and suffering. It did for Jesus. It did for me. Maybe it does for you, too. I believe, even while I hurt, that our obedience is worth all our suffering. The absence of pain is not the goal. Obedience is. Jesus said that only the one who does the will of His Father will enter heaven (Matt. 7:21).

Future glory awaits God’s obedient children. We must pray for the grace to affirm Paul’s words to the early Church: “For I consider that the sufferings of this present time are not worth comparing with the glory that is to be revealed to us” (Rom. 8:18). We mustn’t let our fear of suffering stand in the way of our obedience. We must obey our good Father, even when it hurts. He is worth it.