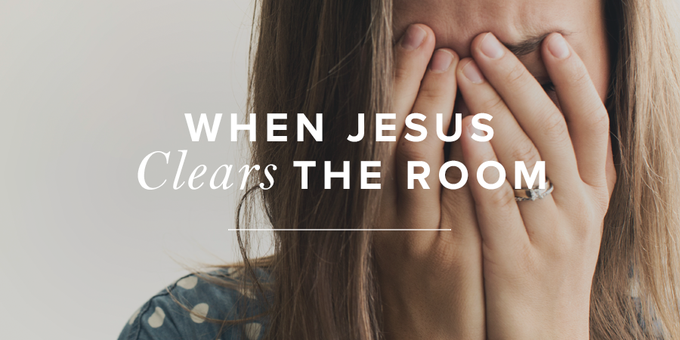 When Jesus Clears the Room

I was blindsided by the turn our conversation took. I had entered the room, prepared to discuss the sin of a certain Wrongdoer. I was confident that this person was wrong, and I had invited “Julie,” an unbiased third party, to discuss what should be done.

As the three of us sat down, I calmly laid out the details of the sins that had been committed. The Wrongdoer squirmed uncomfortably as I spoke, but that was to be expected. What I didn’t expect was for the conversation to shift to my wrongdoings.

Julie began recalling some of my past sins. Ugly ones. She listed them! I immediately became defensive. “I’m not that bad. Look at the rest of the world,” I basically said. But Julie insisted that I was not without sin. She even suggested that my sin had triggered some of the Wrongdoer’s!

I fell quiet and endured the conversation, trying desperately not to cry. The purpose of our meeting was to discuss the grandiose, blaring sin of the Wrongdoer! Why were all the fingers suddenly pointing at me?

I spent the next few days wrestling, losing sleep, and agonizing over what Julie had said about me. I vacillated between two intense reactions. First, I argued in the mirror, “I’m not the bad one! Look at the Wrongdoer!”

But then I would bury my face in shame. Was I this terrible person? Had Julie painted me correctly? And if so, what business did I have serving in ministry or as a mentor? Or even parenting?

The Fog of Shame

Shame is different than guilt. Researcher Brene Brown defines the difference this way: “Shame is a focus on self. Guilt is a focus on behavior. Shame is: ‘I am bad.’ Guilt is: ‘I did something bad.’”

Biblical counselor David Powlison notes: “Guilt is an awareness of failure against a standard. Shame is a sense of failure before the eyes of someone.”

As created beings, our standard—and therefore our guilt—is established by God. And when Adam and Eve fell from that standard, they appropriately felt shame before God’s eyes.

Yet I noticed that my shame after the meeting with Julie was not rooted in being exposed before God’s eyes. I didn’t doubt that God loved me, was for me, and had forgiven my sins. My devastation was over the shame I felt before Julie’s eyes, not God’s.

It grieved me to recognize that I was making Julie’s opinion matter more than God’s. But what could I do? There was no further sin to confess to God, since Julie’s examples were all things I had repented of long ago. Besides, her interest was not in pointing out a particular sin but in reminding me that I also was a perpetual sin-ner. Yet I didn’t see how that was helpful!

My shame clung like a fog that I saw no way out of. I could not rid myself of it. For how can you rid yourself of who you are in the eyes of another person?

In my misery, I searched God’s word for relief and answers.

In John 8, Jesus dealt directly with shame. A woman had been caught in the middle of adultery and was dragged by religious leaders before Jesus. Imagine her shame.

These men who were experts in the law, and they knew the law was on their side. It was Jesus they were putting on trial here. With judgment locked and loaded, they condescendingly pressed Jesus for an answer.

But instead of directly challenging them (as He did other times), I think Jesus was thinking of the woman when He stooped to draw in the dirt. When the Pharisees kept nagging for an answer, Jesus calmly rose and said, “Let him who is without sin among you be the first to throw a stone at her” (John 8:7).

As Jesus turned His eyes back to His drawing, one by one the Pharisees dropped their stones and exited until Jesus was alone with the woman. He stood up, looked into her eyes, and said, “Woman, where are they? Has no one condemned you?”

Inviting Jesus into the Room

I studied Jesus’ reaction to this sinful woman, looking for answers to the shame I was experiencing. I too pressed Jesus for an answer, praying, “Lord, what do You say?”

I closed my eyes to replay the scene with Julie, but this time I invited Jesus into the room.

My heart ached for Jesus’ perspective. I wanted Him to do for me what He had done for the woman and confront my accuser, saying, “She who is without sin cast the first stone.” I wanted Him to validate me and relieve my shame by putting emphasis on the sin of the other people in the room.

But Jesus didn’t do what I was expecting. Instead of absolving me, He drew my attention to the person I had least considered—the Wrongdoer, who had squirmed under my report of their grandiose sin.

My eyes flew open as I realized who I was in the story. I wasn’t the woman; I was the Pharisee!

I had stood in condemnation, so sure that Jesus was on my side. Tears sprung to my eyes as I realized how little compassion I had displayed. And Julie had a point. My past sins (like the Pharisees’) were relevant; they disqualified me from playing judge.

Jesus often likes to clear the room when He talks to one of us about our sin. Yes, we’re all completely guilty. But adding shame over how others see us isn’t helpful. The condemnation we find in another’s eyes only fogs things up.

We need a moment of clarity, alone with Jesus—the lifter of our heads (Ps. 3:3)! For when we confess, He is faithful to forgive us. When we repent, His blood cleanses us from sin (1 John 1:7, 9). He looks into our eyes and says, “I am not condemning you. Go and sin no more.”

Is there a chance you might be acting like a Pharisee without realizing it? Do you want to look perfect in others’ eyes? Do you point fingers of condemnation to divert shame away from yourself?

The more perfectionistic we are or the more we think of ourselves as elevated, the more devastated we become when someone demolishes our image of perfection. We lash out in defensiveness or become overcome with shame. But like I discovered, we find clarity when we invite Jesus in the room.

Think back to the last time you became angrily defensive. Reconstruct the room in your mind.

Were you pointing at someone else’s sin? And were they pointing back at yours? Even now, as you think of what was said, do you alternate between defensiveness and shame? Do you vacillate between reponses like, “How dare they accuse me?” and, “Good grief, have I ruined my kids?”

Close your eyes and invite Jesus into that room. Let Him step into the center of all the finger-pointing, defensiveness, and shame. Listen as He quietly poses a question for you to consider.

Am I without sin? Am I in a position to judge?

Perhaps, like me, Jesus is asking you to back away and give Him the room.

Finding Yourself in the Story

When Jesus showed me the way I had so coldly laid out the Wrongdoer’s sin that day, I had new compassion and new brokenness over my own judgmental spirit.

Over the weeks to come, I refused to obsess over what Julie thought of me and chose to focus instead on God and His forgiveness toward all the wrongdoers in that room—which was Julie’s intent in the first place. Slowly, my shame lifted and I was free.

Each of us first encounter Jesus like the woman who was caught in the middle of her sin. But today, where do you find yourself in her story?

If you’re cowering in shame because of how you look in the eyes of another, Jesus wants to be the lifter of your head. He clears the room of judgment, cleanses you from sin, and delivers you from shame.

If you’re a Pharisee unaware—intent on pointing out everyone else’s sin but diverting attention from your own—Jesus poses a question. Are you without sin? Are you in a position to judge? He invites you to humble yourself, drop your stones of condemnation, and give Him the room.

And where do we go from here? For each of us, our instructions are the same: Go and sin no more.

The Father Who Eliminates Shame