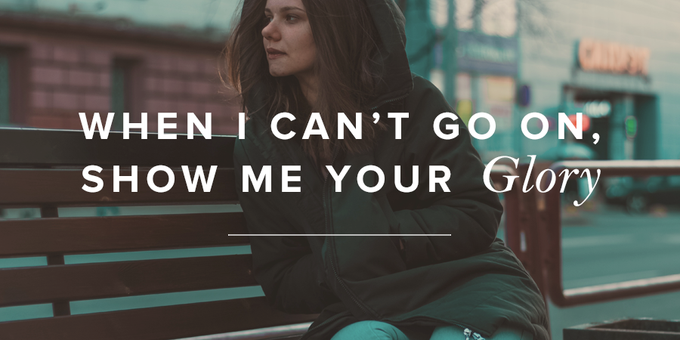 When I Can’t Go On, Show Me Your Glory

I was in the shower, shedding tears of desperation. As the water poured over me, I cried out to God to give me a special kind of love for my husband that I couldn’t produce on my own. “God, please help me. I can’t do this. I can’t. Give me the love I don’t have.” At the time, my husband and I were going through the darkest season of our marriage. I was deeply wounded. And in my hurt I was laid low. I saw my need. I saw the depravity of my human impulses, which was to hate the one who caused my pain. My impulses were not like Christ’s, and this was good for me to acknowledge.

I spent a lot of time during that season letting myself grieve and feel the emotional pain, but I knew in order to not grow bitter and be able to move on I would need more than inner strength—I had none. I needed God’s presence to go on. I needed the power of Christ. His love. His strength. I found much consolation in the Word and prayer.

God met me and was with me. He touched me with the power of His Word and His Spirit. I couldn’t go on without Him, just like Moses knew he and God’s people could not continue their journey without the presence of God. During that dark night of my soul, I would repeat to myself what Moses said in Exodus 33:18: “Show me your glory.” I needed to see His glory in order to have hope for the future.

His Presence Is Everything

Israel had sinned greatly, in the incident of the golden calf, before Moses asked this of God. God told Moses to lead the people to the Promised Land, but informed Moses that He would not go with them, because He’d have to consume the Israelites for their sin. In fact, God’s presence was removed from their midst. The Tent of Meeting was now pitched outside of the camp. When Moses would walk to the tent, all the Israelites would stand at their tent door as he passed by (Ex. 33:7–8). Their hope was in Moses, because he was talking to God face to face on their behalf (v. 11).

Moses was going outside of the camp for the people in order to make intercession for them. He pleaded with God on the basis of his own favor with God and the fact that the Israelites are God’s people—His chosen nation (vv. 12–13).

In verses 15–16, Moses said, “If your presence will not go with me, do not bring us up from here. For how shall it be known that I have found favor in your sight, I and your people? Is it not in your going with us, so that we are distinct, I and your people, from every other people on the face of the earth?” Moses knew that they would fail if God would not go with them to the Promised Land. God was their leader, their source, their supply. If He was not with them, they were lost and without hope. Without God their future was bleak. His presence was everything.

Here in Exodus 33 we see Moses standing in the gap for the Israelites. He is advocating for them by pleading their cause, making intercession for their sins. Ultimately, because of God’s favor on Moses, God’s favor extended to the people of Israel because Moses was representing them. The Lord articulates His favor over Moses:

And the LORD said to Moses, “This very thing that you have spoken I will do, for you have found favor in my sight, and I know you by name” (v. 17).

And it’s after this that Moses asks to see His glory. God makes all His glorious goodness pass before Moses and proclaims His name, “The LORD” (v. 19).

Like Moses and the Israelites, we can’t go on in life without the presence of God and His glory passing over us. We need to see His glory in order to see ourselves accurately. We need His presence and glory in our lives, in good times and bad. When I felt like I couldn’t go on in my marriage, I sought after God’s glory and presence as my only hope. This was mainly accomplished through delving into His Word. Portions of Scripture and whole books of the Bible were my hope.

I saw the glory of His love for me and His grace over my marriage. His glorious love in response to sin against Himself humbled me. He was glorious, and I was not. He was full of beauty, and I was ugly with sin. I needed to see that before I could confess my weakness and ask for His strength, for His love to infuse me and flow out of my wicked heart. The glory of His love for sinners gave me hope that He would help me go on.

The Hope of Christ’s Glory

The apostle had also received the knowledge of “the glory of God.” Never had the God of Abraham appeared so glorious as now. God in Christ Jesus had won the adoring wonder of the apostle’s instructed mind. He had known Jehovah’s glory as the One and only God. He had seen that glory in creation, declared by the heavens and displayed upon the earth. He had beheld that glory in the law which blazed from Sinai and shed its insufferable light upon the face of Moses. But now, beyond all else, he had come to perceive the glory of God in the face, or person, of Jesus Christ and this had won his soul.

The glory of God in the face of Jesus Christ is our only hope. Through Him we are justified by faith and have peace with God. We have obtained access to grace by the life, death, and resurrection of Jesus. God is no longer far off, because Christ went outside the camp for us. The glory of His presence is not taken away because of our sin but promised to us through the gospel.

Charles Spurgeon further said, “There is vastly more revealed in the person of Christ than we shall be likely to learn in this mortal life—and even eternity will not be too long for the discovery of all the glory of God which shines forth in the person of the word made flesh.”