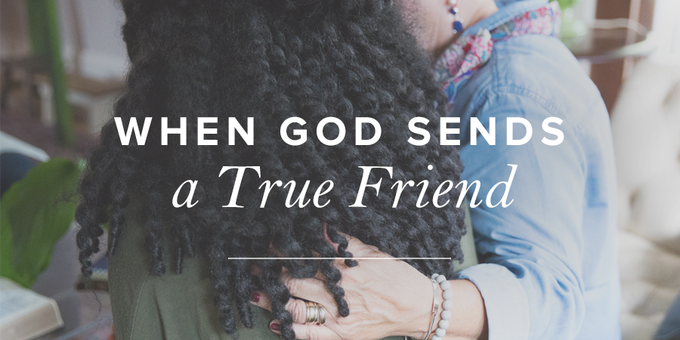 When God Sends a True Friend

The conference area was crowded, but I made my way to a table at lunch and sat down by myself to reflect on the morning’s sessions. I wasn’t attending this event as a speaker, not even as a pastor’s wife, and I was there completely alone; I didn’t know a soul at this church. LeRoy had stepped out of the pastorate a few months before, and I hoped to find some answers at this conference.

This conference filled with “happy” women highlighted how lost I felt. I’d been isolated and in a dark place for so long that the laughter and lively conversations around me were startling. We’d been in the desert land for a few years now, wandering through a wilderness of loss and confusion, and I was groping for hope. I was young to already wear the stigma of a “former” pastor’s wife.

Little did I know that God was going to do something at this women’s event that would impact me eternally. God was about to move in and provide me with the gift of a true friend. I want to use today’s post to feature my precious friend. She doesn’t have a clue I’m doing this (I’ll ask forgiveness later)!

In God’s gracious providence, Holly Elliff sat down beside me at that conference lunch table and asked if she could eat with me. It was our first conversation, one that would be followed by more than two decades of opening our hearts to each other, deeply connecting, and getting to God in sweet prayer times. We’ve dug out truth from the Word together, and for me, Holly’s friendship has fulfilled the charge from Hebrews 10:24 to “stir up one another to love and good works.”

When Holly opens her mouth, you can be assured that truth and grace are going to flow out, coming from a wealth of life experience and years of saturating herself in the Word. Many times throughout our friendship, I would call her when I was in a weak condition—whether it was in the years of marital misery, during a difficult season in our church or with our children, or in the last hours before my dad stepped into eternity. All I had to say to Holly was, “Tell me truth.” And she would pour truth into me, covered with love.

But our friendship hasn’t been spent only in the trenches of pain, Holly and I have also had years of laughter together. We are part of a group of friends that call ourselves “The Sisterhood,” and we intentionally plan for monthly prayer calls and yearly retreats together. It takes some effort, but we’ve enjoyed a rich community of friendship this way. I’m grateful that I can call on any of these women, day or night, and they jump in to hold up my arms, cover me in prayer, and speak truth and grace to my heart. (I would encourage you to start a group of iron-sharpening-iron friends if you don’t have one already!)

When Holly stands on a platform to challenge women to live out Scripture by humbly serving, it’s not a shallow cliché. Holly has logged decades of serving others. She was only thirty-seven years old and pregnant with her fourth child when she began caring for her mother-in-law who had Alzheimer’s disease. That was the first loved one with a debilitating mental condition that Holly cared for, but it wouldn’t be the last. Four children later, and a few grandchildren as well, brought the need to move her mother from Nashville for Holly to care for her through a long and difficult decade with Alzheimer’s.

Self-sacrifice has been a way of life for Holly since her journey into motherhood began. She educated her eight children, balancing mothering with her many other responsibilities as a pastor’s wife. She has discipled hundreds of women in her church, served as a member of the praise team, plus led the women’s ministry, all while staying deeply connected to Bill, the love of her life. Today, she intentionally invests in her twelve grandchildren (the count will be fourteen little ones under ten years old by this July), and she continues to juggle all of that (quite capably) with her many ministry responsibilities.

Gracious wisdom rolls off Holly’s tongue when she opens her mouth to counsel a woman in distress. I’ve been with her many times when women have approached us at a conference and watched as Holly was able to gently guide the woman through a series of carefully issued questions to help clear the confusion and get to the root issues. She always points women to the sufficiency of Christ and the dependability of God’s Word.

Not Wasting Her Life

This week, Holly shared with me that for the first time in thirty-nine years, their home is empty of children. (That’s almost four decades of child-rearing, folks!) She is asking God, “What’s next?”

Holly’s not planning European vacations or considering vegging on the couch in front of HGTV with a sack of chips and a Dr. Pepper (from Sonic, of course!). She’s asking God, “Where do You need me to serve next?” A lot of women in her age bracket are only focused on how they can serve themselves, how they can coast the rest of the way or hop in an RV to cruise the nation, while ministry is left in the rearview mirror.

Holly’s heart is to spread the gospel and serve others, whether it’s while she’s on a grocery run or on a platform before thousands. She gladly shares the Word with a single woman, a houseful of hungry college students, or at a conference where women need to hear from a woman who’s been there. (She and I often have the opportunity to sit down and visit with Nancy DeMoss Wolgemuth about the critical need for women to live out the Word. You can listen to one of those recent broadcasts from Revive Our Hearts here.)

Holly is in a season where God can use her to spread wisdom and a life message, and I look forward to watching what He has for her in the coming years. She’s been a gift to me personally, and I wanted to share her with you. This video that Revive Our Hearts produced a few years ago will allow you to get a glimpse of Holly, and you’ll see why I treasure her so much:

If you’re reading this post, and it has stirred a longing in you for a friendship like the one Holly and I share, I encourage you to begin asking God to lead you to similar friendships. And ask Him to use you to be a friend like that in women’s lives who desperately need a truth-speaking confidante. You might find these blog posts on friendship helpful.

This post was originally posted at kimberlywagner.org. For more great resources on being a true friend to other women, check out the book, Adorned, by Nancy DeMoss Wolgemuth.

True Friends in a World of Online Acquaintances