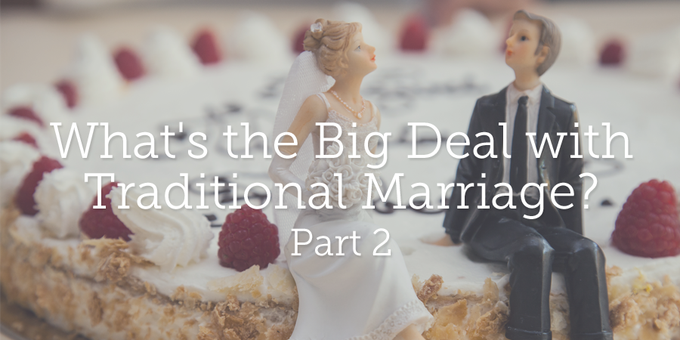 In my last post we considered the question of why God only created two genders. I encourage you to go back and re-read that post before diving into this one or it may be difficult to follow!

We're looking at the three exchanges occurring in Romans 1. I'll include them again today:

What is happening here?

The first exchange removes God from His transcendent position of "other" and attempts to drag Him into our realm: Deity and corruptible man in the same category.

Trading Truth for a Lie
The second exchange is a little more obvious—trading truth for a lie. We see this occur on a regular basis. Again, this is an exchange of opposites. In order to move from the worship of God to the worship of man, the truth must be denied and the lie believed. Self-deception is necessary if one is to proceed to the third and final exchange.

God's Order Inverted
The final exchange provides for the dismantling of the traditional marital union. When heterosexual marriages are exchanged for same-sex relationships, God's created order is inverted. The purpose of marriage as a visible portrayal of the "Transcendent Other" (God) uniting with mortal, finite man is destroyed. Same sex marriages remove the equation God created when He placed opposite genders together in union. God's designation of marriage as a union between one man and one woman is the physical vehicle He created to depict His great mystery: the relationship between Jesus (the Bridegroom) and the church (His bride). (See Ephesians 5:22–33.)

What is the big deal about preserving the idea of traditional marriage? What is all the fuss about?

Homosexuality negates the intrinsic value and significance of the male-female relationship. It presents a "homogeneous" model in relationships. Although people have various reasons for where they come down on this issue, for me it is more about the nature of God than about sexual preference.

Omitting the Transcendent
When marital partners unite in a model where there are two of the same rather than opposites, the picture of the "Transcendent Other" uniting with man is missing. Notice that immediately following the description of the third exchange which resulted in homosexual activity, Romans 1:28 states:

And ... they did not see fit to acknowledge God any longer.

The progression that led to same-sex relationships began with the exchange of God's uniqueness as Deity in relation to finite man—exchanging God's "otherness" for uniformity (or "sameness") with common man.

I love the fact that the transcendent God, the One who is like no other, chose to have relationship with me—finite and very human me. Although we are in "relationship" together, it is a bonding of two very un-homogenous natures. God will never become "one" with mankind in the sense that He is no longer "other" "transcendent" Deity. He is God; I am not.

When I take a stand for traditional marriage, it's about vindicating the nature of God. I believe the marriage of opposite genders reflects the spiritual dynamic which occurs when Eternal Deity enters into relationship with finite man.

How about you? Do you support the traditional view of marriage? If so, why?

How can we communicate more effectively (not aggressively) this truth about the uniqueness of marriage in view of God's divine nature or His "otherness"?